In Haiti, armed gangs tax the poor, extort the rich and do the bidding of the powerful 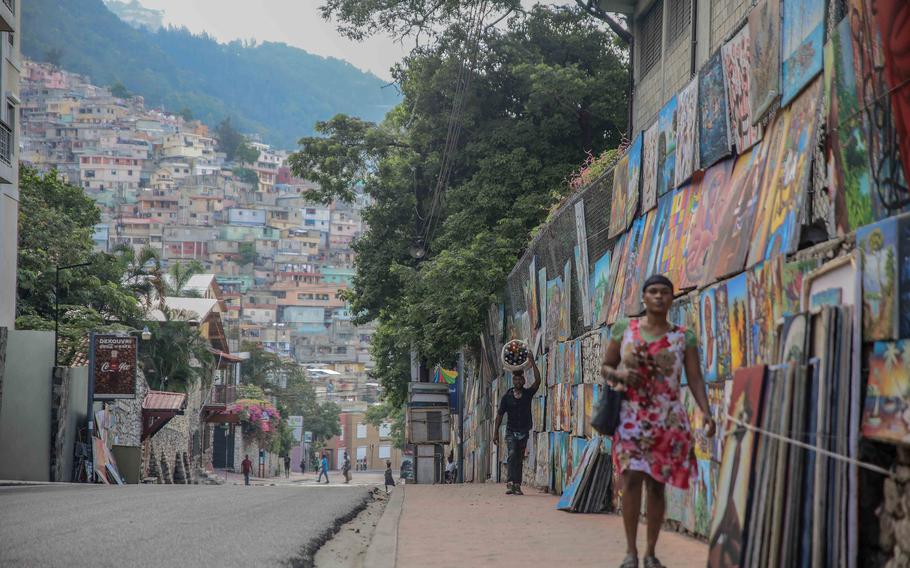 (Tribune News Service) — Wearing the required white suit and black tie of Haitian leaders, Jimmy “Barbecue” Chérizier, a former cop turned wanted gang leader, walked up Sunday to the monument commemorating the assassination of the founding father of the nation, Jean-Jacques Dessalines, and placed the traditional wreath at its feet before giving a military salute.

Playing the official role of a head of state and brazenly showing his power, Chérizier showed up accompanied by cameras, a crowd and his own delegation — heavily armed, hooded gang members dressed in T-shirts marked “Justice for Jovenel.”

Hours earlier, armed gunmen had blocked access to the historic site by the country’s acting prime minister, Ariel Henry. Forced to flee the area under a hail of gang gunfire, Henry, also dressed in the customary white suit, had to settle for laying the traditional wreath at the altar of a museum in downtown Port-au-Prince where Dessalines’ remains are kept.

Gangs have become so powerful in a chronically unstable and volatile Haiti that a simple time-honored tradition like the public commemoration of the Oct. 17, 1806, death of Dessalines, carried out by Haitian leaders over the years, is now being held hostage by the country’s criminal gangs.

Since 2018, when President Jovenel Moïse and another one of his prime ministers, Jean-Henry Céant, were chased from Pont-Rouge, the site north of the capital where Dessalines was killed and the monument is located, no Haitian leader has been able to set foot in the area.

The incident unfolded while 16 Americans and a Canadian were being held captive by another notorious gang leader on the eastern outskirts of the capital. It illustrates how the state authorities in Haiti have been made completely irrelevant by gangs who tax citizens, dictate when they can or can’t take to the streets and even block government officials from fulfilling their obligations.

“They are the government,” Gédéon Jean, a human-rights activist who monitors Haiti’s kidnappings, said about the armed groups that now encircle almost every section of the capital and other key cities in the Caribbean nation. “They are the ones who decide to kill someone if someone has done something to you; they decide whether and when to tax you.

“What is developing here is some sort of quasi-state, the same like you have with ISIS in Syria,” added Jean, who runs the Center for Analysis and Research in Human Rights in Port-au-Prince. “They are not there yet, but all of the conditions are ripe for them to go this route and you will see they have developed a certain autonomy.”

Haiti has no shortage of problems. There is the still unsolved July assassination of its president, Moïse, in his private residence above the capital; the deepening humanitarian crisis triggered by the deadly Aug. 14 earthquake and the tropical storm two days later in the southern peninsula; a crumbling economy and worsening political volatility, all of which are stoking a new migration crisis.

But the No. 1 problem that needs to be resolved, Jean and others say, is the question of criminality, kidnapping and insecurity that is driving instability.

The notorious gang 400 Mawozo that is behind the kidnapping of the Christian missionaries began its criminal run by first stealing cattle, then cars before moving into abducting entire busloads of individuals while also extorting businesses located in the vast, mostly rural territory it controls.

Last month, word circulated among business people in Ganthier and parts of the Croix-des-Bouquets area where the gang operates that it had now formalized its extortions by listing the required “taxes.” Everyone from the owner of a beauty salon to a charcoal merchant would be required to pay every week — or in the case of goat merchants, per goat, according to the list. In some cases, entrepreneurs were personally called up and informed of their “tax” bill. In other cases, it was delivered anonymously.

“If you are going to start up a business, you have to negotiate with the gang,” Jean said. “For years now, they have controlled the market, have had the [water distribution], the electricity in their hands. But today it is systematic.... If 400 Mawozo tells people in Croix-des-Bouquets not to go out, people don’t go.”

The gang’s name loosely translates into “400 Simpletons” in Creole. Though one of its key leaders is jailed in the National Penitentiary, others have managed to escape arrest thanks to motorcycle drivers, merchants and even cops who warn of pending police operations. Its base, located not far from where the missionaries’ vehicle was hijacked at gunpoint, is hard to reach and shrouded by spiny fuelwood and impassable dirt roads.

As the missionaries marked their third day in captivity Tuesday, Haitian officials said the gang had asked for $1 million for each of the hostages, the youngest of which is an 8-month-old baby. Though gangs usually start by seeking high ransom amounts, the request immediately set off alarms about whether the gang was trying to raise money toward a potential election war chest.

Last year, two separate human rights organizations in Haiti, the National Human Rights Defense Network/Réseau National de Défense des Droits Humains (RNDDH) and Fondayson Je Klere, concluded that criminal gangs, already linked to multiple massacres, rapes and for-ransom kidnappings, were becoming guns for hire for Haiti’s political forces. At the time of the reports, Haiti was in the midst of an electoral debate and Fondasyon Je Klere estimated that there were at least 150 criminal gangs operating throughout the country. Today, some estimate the number is as high as 200.

The reports were issued days after dozens of houses in Pont Rouge and the nearby communities of Chancerelles, La Saline, Tokyo and Fort-Dimanche were set ablaze, and people were burned and shot to death.

That same month, Chérizier, who has been implicated in several massacres including the 2018 brutal killing of dozens of people, including women and children, in Port-au-Prince’s La Saline neighborhood, announced the creation of a new gang federation he called G-9 and Family and Allies.

While Chérizier, promoting himself as the savior of the Haitian people, has said he doesn’t participate in kidnappings, members of his deadly alliance have been linked to mass kidnappings, gang violence, extortions and the trafficking of arms and ammunition, as well as drugs. They also serve as the muscle for members of the business elite and politicians.

To understand how Haiti, a country where kidnapping was a foreign concept just a few years ago, got here, one only has to look at the country’s policies that have promoted an environment where health, education and other basic services are primarily fulfilled by nongovernmental, charitable organizations and the daily struggle for subsistence is fueled by extreme economic scarcity, said Robert Fatton, a Haiti expert at the University of Virginia.

Those policies have weakened the Haitian state to the point that it can no longer perform its basic functions, exemplified by the neighborhoods gang leaders come from and where they keep hostages: ramshackle, concrete maze-like slums where sewage runs down streets and pigs feed off corpses.

“Supplanted by an ‘NGO republic,’ the Haitian state has become an empty shell incapable of providing minimal services to its citizenry,” Fatton said. “Criminality has acquired dimensions that threaten the very survival of the state.”

The disintegration of the Haitian state, which has been failing for years, has generated political decay, alarming levels of insecurity and a severe erosion of the sense of civic obligation. “The realities of acute deprivations have compounded the crisis of the state by nurturing opportunistic strategies of survival based on corrupt forms of patronage, and criminal combinations,” Fatton added.

Most of the people in gangs are young, and come from deprived neighborhoods where the state is absent and social services are non-existent. Some gang leaders like Chérizier try to bill themselves as modern-day Robin Hoods, seeking to rescue the poor. But a drive through the neighborhoods they control shows no signs of improvement from the ransoms they have collected except in the heavy arms and ammunition gang leaders often show off in viral videos and staged press conferences.

“I think you’ve got a situation in Haiti where the government has ceded almost everything to the gangs; [the government] kind of functions in name and on paper only,” said Keith Mines, director of the Latin America program at the United States Institute of Peace in Washington. “The only thing that I can think of that’s like this was Somalia in 1992 where, in that case, the government had completely dissolved.”

Without some kind of intervention, Mines fears, Haiti could find itself as a place where “some of these gangs just kind of emerge as the leader of the country and the next thing you know, you literally could have a gang-led coup.”

Like others, he asks: What is ultimately the goal of the gangs?