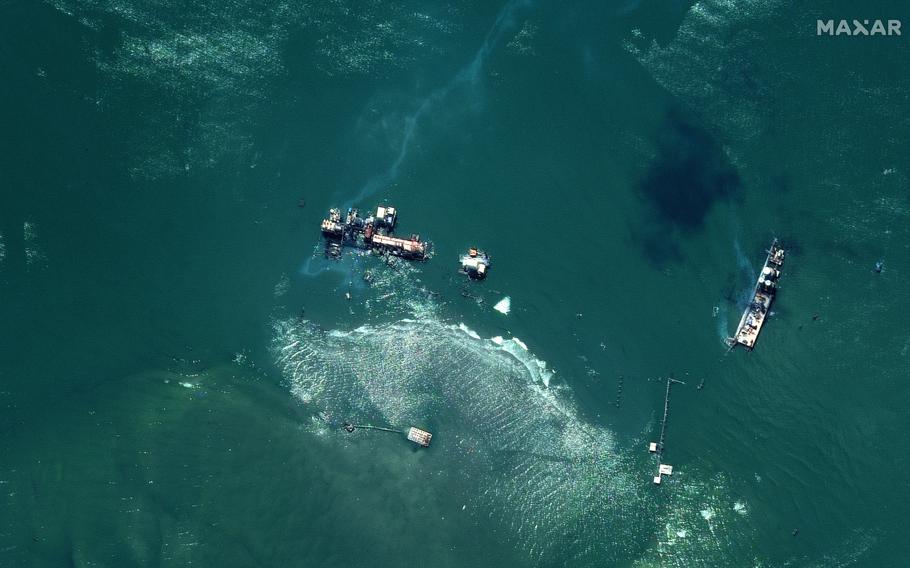 A satellite image shows a view of oil slicks in the Gulf of Mexico at East Timbalier Island National Wildlife Refuge in Louisiana, in the aftermath of Hurricane Ida, on Sept. 4, 2021. (Satellite image ©2021 Maxar Technologies via AP)

WASHINGTON — The company overseeing the response to a large oil spill spurred by Hurricane Ida said Tuesday that a containment dome has been placed over a broken undersea pipeline, stemming the flow into the Gulf of Mexico.

Houston-based Talos Energy said in a statement that its oil spill response contractor had installed the containment dome Monday evening, allowing for the recovery of the oil coming from the sheared-off 1-foot-diameter (30-centimeter-diameter) pipe and transferring it to surface vessels.

Talos said it does not own the ruptured pipeline that divers identified as the likely source of an 11-mile-long oil slick that appeared after the Category 4 hurricane made landfall on Aug. 29.

The Associated Press first reported last week that aerial photos showed a large brown and black oil slick spreading about 2 miles south of Port Fourchon, Louisiana. The broken pipe is in relatively shallow water, at about 34 feet of depth.

Talos said the rate of oil appearing on the surface had slowed dramatically over the weekend and that no new heavy black crude had been seen since Sunday.

So far, the spill appears to have remained out to sea and has not affected the Louisiana shoreline. There is not yet any estimate for how much oil was in the water.

The U.S. Coast Guard said over the weekend its response teams are monitoring reports and satellite imagery to determine the scope of the discharge, which is located in Bay Marchand, Block 4. Talos previously leased Bay Marchand, Block 5, but ceased production there in 2017, plugged its wells and removed all pipeline infrastructure by 2019, according to the company.

The company said it is working with the Coast Guard and Louisiana regulators to coordinate the response and identify the pipe's owner.

During an overflight of the area on Sunday, the crew of a Coast Guard survey aircraft spotted another oil slick identified as coming from an oil platform belonging to S2 Energy, located approximately 5 miles (8 kilometers) away from the Bay Marchand site.

According to the Coast Guard, the company reported that it has secured the wellhead to stop the leak and deployed a boom to contain a roughly 1-acre area of oil floating on the water. The amount of oil that leaked from the platform has yet to be determined.

No one could be reached Tuesday at a phone number listed for S2 Energy in Covington, Louisiana, and no one responded to an email.