Man traveling on raft from Cuba saved, but 3 others died, Coast Guard says 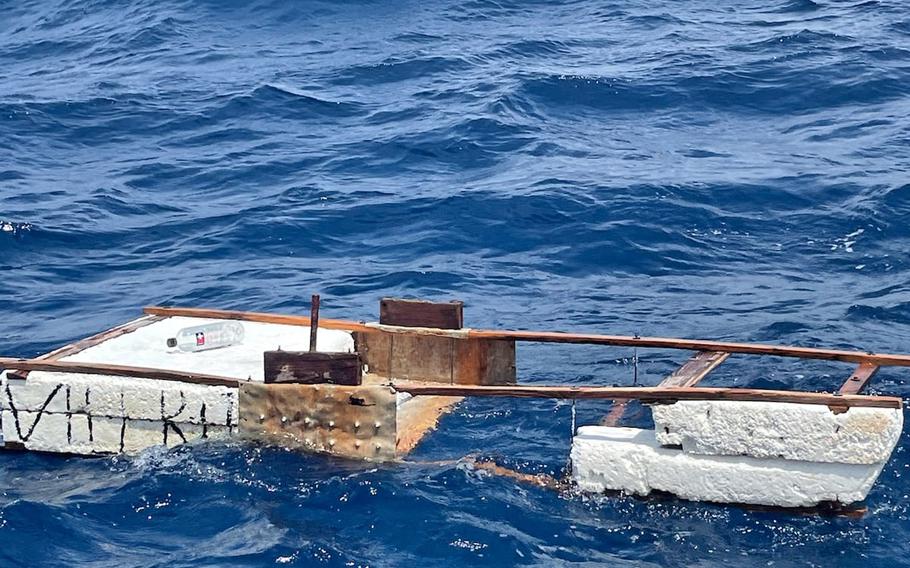 Four people tried to make it to Florida’s shores from Cuba on a makeshift raft, according to the U.S. Coast Guard. (U.S. Coast Guard Sector Miami/Facebook)

MIAMI (Tribune News Service) — Braving the Florida Straits on a makeshift raft, four people tried to make it to Florida’s shores from Cuba, according to the U.S. Coast Guard. Adrift for more than a week, three died and one was saved after a good Samaritan spotted the raft.

Around 1 p.m. on Saturday, the unnamed Samaritan came across a man on the makeshift raft while he sailed on his boat, named Spread Out, the Coast Guard said.

After receiving the report of a raft near Fowey Rocks, which is a few miles from Key Biscayne, a Coast Guard Station Miami Beach rescue crew came to the rafter’s aid.

The man told authorities he left from Cuba, was adrift for 10 days and that three other people with him had died, according to the Coast Guard. He needed immediate medical care.

Miami-Dade Fire Rescue took him to a hospital. Customs and Border patrol have been alerted.

“We cannot stress enough how dangerous it is to take to the seas and navigate the Florida Straits on unsafe vessels,” said Lt. Cmdr. Ben Tuxhorn, command center chief of Sector Miami. “The South Florida maritime community has some of the best people who assist others while on the water, whether that’s towing a boat or helping out a migrant with food, water, and bringing them aboard if necessary.”