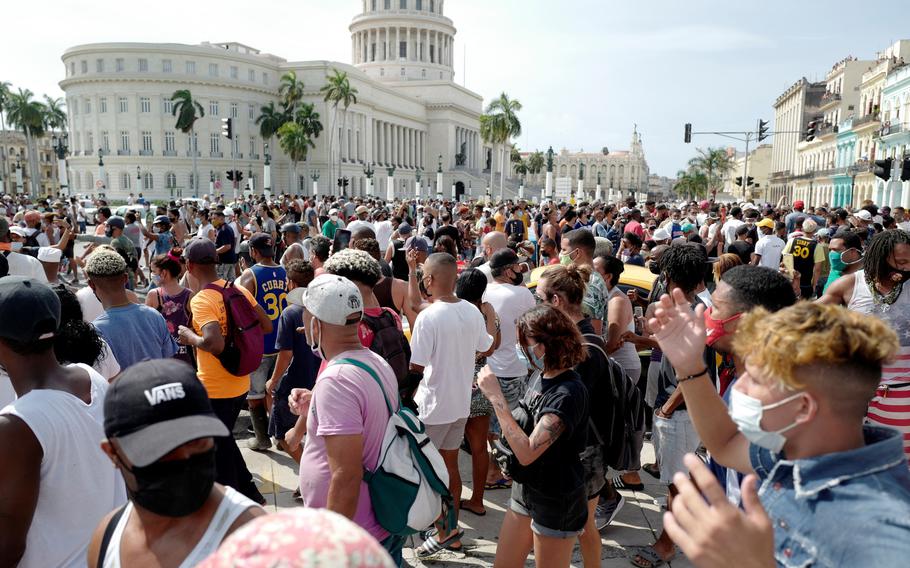 People take part in a demonstration against the government of Cuban President Miguel Diaz-Canel in Havana, Cuba, on July 11, 2021. (Adalberto Roque, AFP via Getty Images/TNS)

(Tribune News Service) — The Biden administration issued a new round of sanctions Friday against police officials and a military unit involved in the violent crackdown of anti-government protesters in Cuba.

The new names added to the U.S. Treasury Department’s blacklist are Romarico Vidal Sotomayor Garcia, the chief of the Political Directorate of the Ministry of Interior; Pedro Orlando Martinez Fernandez, the head of the Political Directorate of the PNR; and the Tropas de Prevencion of the Cuban Ministry of Revolutionary Armed Forces, known as “Red Berets.”

“The Treasury Department will continue to designate those who enable the Cuban government to perpetuate human rights abuses against peaceful demonstrators,” said Director of the Office of Foreign Assets Control Andrea Gacki. “Today’s action shines a spotlight on additional perpetrators responsible for suppressing the Cuban people’s calls for freedom and respect for human rights.”

President Joe Biden condemned the repression unleashed against Cubans who took to the streets to protest against the government on July 11 in Havana and other cities. Many are still in jail, including leaders of the dissident movement like Jose Daniel Ferrer, Luis Manuel Otero Alcantara and Felix Navarro. Activists have documented over 750 detentions in the aftermath of the demonstrations and Cuban authorities are sentencing peaceful protesters on summary trials under charges of “public disorder.”

Last month, the Department of the Treasury used the Global Magnitsky Act to sanction the Revolutionary National Police, its director Oscar Alejandro Callejas Valcarce and its deputy, Eddy Manuel Sierra Arias. The U.S. also blacklisted Gen. Alvaro Lopez Miera, the head of the armed forces, and the Black Berets, a Ministry of Interior special forces unit deployed to suppress the uprising.

People and organizations added to OFAC’s Specially Designated Nationals and Blocked Persons list have their assets frozen and can’t travel to the U.S.

Cuban officials have dismissed this type of targeted sanctions by saying that government officials do not have assets or plans to come to the U.S.

The announcement coincides with the birth anniversary of the late Cuban leader Fidel Castro, a date celebrated by the island’s government.