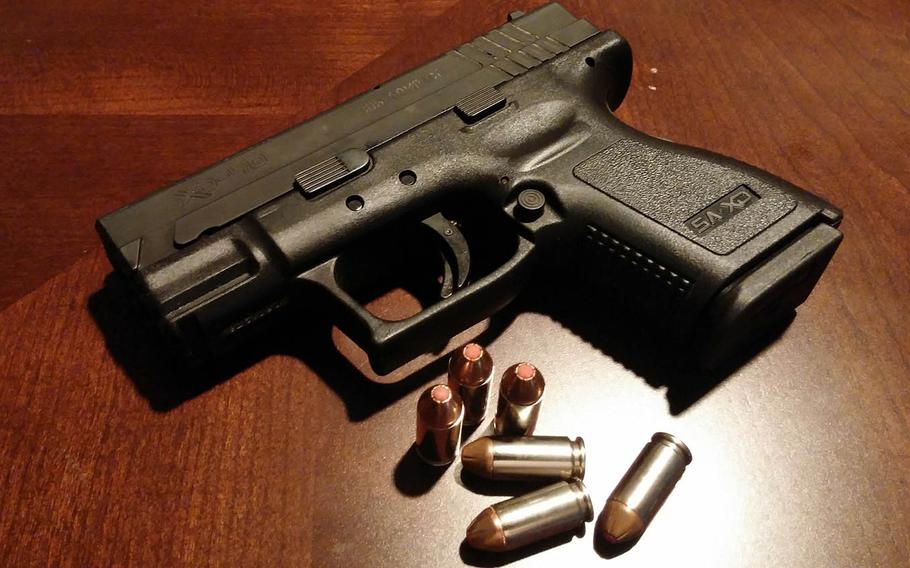 A Smith and Wesson XD-40 compact lays on a desk. (PIXABAY)

The unusual suit - filed in U.S. federal court in Boston - seeks unspecified financial compensation from the companies but does not target the U.S. government.

Mexican authorities argue that American-made weapons have fueled an explosion in homicides in this nation over the past decade. Around 2.5 million illicit American guns have poured across the border during that period, according to a Mexican government study released last year. Legal gun sales in Mexico are tightly restricted.

"If we don't file a suit like this and win it, they're never going to understand, they're going to continue doing the same thing and we will continue having deaths every day in our country," Mexico's foreign minister, Marcelo Ebrard, said at a news conference.

Security experts in Mexico saw the lawsuit as an attempt to raise the profile of gun-trafficking issues but one unlikely to lead to a legal victory. A U.S. law that took effect in 2005 shields gun manufacturers from most civil liability claims.

The legal action "sends a statement and creates a pressure point with the Biden administration," said Alejandro Hope, a Mexico City-based security consultant. "But I don't think the Mexican government is expecting to win."

In addition to financial damages — which Mexican officials estimated could run to $10 billion if the legal action is successful — the suit also seeks tighter controls on sales and better security features on weapons.

The companies did not respond to requests for comment. In a statement, the National Shooting Sports Foundation, a trade association for the American firearms industry, rejected the claims that U.S. gun manufacturers were negligent.

"These allegations are baseless," said Lawrence Keane, the group's senior vice president and general counsel. "The Mexican government is responsible for the rampant crime and corruption within their own borders."

Cross-border trafficking has created a growing pool of weapons that circulate among armed groups in Mexico. The most powerful guns go to large drug cartels, and older, smaller weapons find their way into the hands of lower-level criminals.

"Because of the abundance of firearms, now every little gangster has AK-47s or Barrett .50s," said Ioan Grillo, author of the book "Blood Gun Money: How America Arms Gangs and Cartels." "Then there's the spillover effect, when cartels send 'burned weapons' to streets and you have schoolkids buying them."

The ease with which Mexican cartels can access military-grade weapons has fundamentally altered the challenge faced by the country's security forces.

"State police and municipal police have kind of melted away," Grillo said. "They're not going to fight against guys with .50-calibers," Grillo said.

If local police are not intimidated, they are often bought off by crime groups, security analysts say.

The lawsuit maintains that the U.S. arms manufacturers "are conscious of the fact that their products are trafficked and used in illicit activities" in Mexico, according to a document from the Foreign Ministry.

"Nonetheless, they continue to prioritize their economic benefit, and use marketing strategies to promote weapons that are ever more lethal, without mechanisms of security or traceability," it continued.

The government alleges that U.S. gunmakers design weapons that will appeal to Mexican crime groups — citing, for example, a Colt .38 Super pistol engraved with an image of revolutionary hero Emiliano Zapata. That model of handgun was used in the assassination of an investigative journalist, Miroslava Breach, in 2017.

"It is difficult to read this complaint without coming to the conclusion that, as a matter of ethical business practices, there is no defense to what these companies have done," said Adam Skaggs, policy director with the Giffords Law Center to Prevent Gun Violence.

Still, he said, the case will be tough to win, because of the Protection of Lawful Commerce in Arms Act, which bars most civil lawsuits against arms companies after their guns are misused. The Mexican government's case argues that the 2005 measure immunizes the gun industry only from lawsuits involving violence in the United States.

Arms trafficking is hardly the only thing fanning violence in Mexico. The nature of the drug trade has changed in recent years, with cartels splintering into smaller, feuding groups that have diversified into extortion, kidnapping and other criminal activities.

Successive Mexican presidents have tried to stanch the violence by overhauling the justice system, arresting drug kingpins and providing job programs to lure young people away from crime. But they have achieved few results. Security analysts say the government has not had the political will to carry out a more profound transformation of the courts and police.

Mexican authorities said several recent U.S. cases had given them hope their lawsuit could succeed. Among them was a judge's decision that survivors and relatives of a 2019 shooting at a California synagogue could move ahead with a lawsuit against the manufacturer of the weapon used in the attack.

U.S. analysts say policy changes such as an assault-weapons ban and universal background checks for gun buyers would reduce trafficking. But the Mexican government, they say, has come to doubt that those changes will happen.

"It's not surprising that they're looking for other ways to either bring awareness to the issue or correct it," said Eugenio Weigend, the director for gun-violence prevention at the Center for American Progress.

The Washington Post's Sammy Westfall and Taylor Telford in Washington contributed to this report.