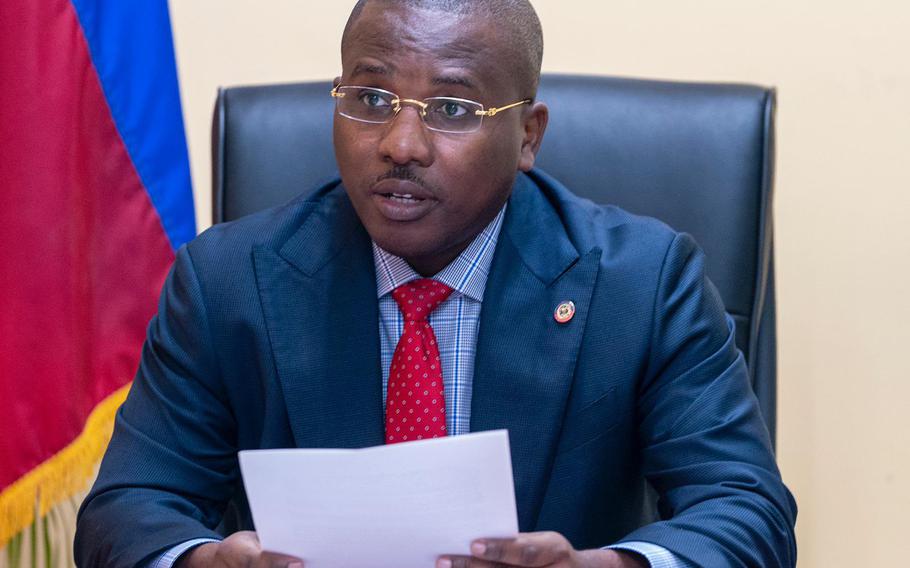 PORT AU PRINCE, Haiti — Claude Joseph, who has nominally led Haiti as acting prime minister since the assassination of President Jovenel Moïse, said in an exclusive interview with The Washington Post on Monday that he had agreed to step down, handing over power to his challenger who has been backed by the international community.

The agreement ends a power struggle between two men who had been courting support internationally and domestically for their rival claims as Haiti’s interim leader, and is aimed at defusing a roiling political crisis that has left the troubled Caribbean nation rudderless since the July 7 assassination.

Joseph had previously claimed that Ariel Henry, the 71-year old neurosurgeon who was appointed prime minister by Moïse two days before the killing, had not yet been sworn into the job and had no right to act as interim leader. Joseph, who was Moïse’s foreign minister, had also been serving as acting prime minister before Moïse named Henry, a fact he had claimed made him Haiti’s rightful interim leader following the slaying.

But on Monday, he said he and Henry had been privately meeting over the past week in a bid to resolve the leadership dispute, and that he had finally agreed on Sunday to step down “for the good of the nation.”

“Everyone who knows me knows that I am not interested in this battle, or in any kind of power grab,” Joseph said. “The president was a friend to me. I am just interested in seeing justice for him.”

Late Sunday, Henry released an recorded address in which he reiterated his claim to the prime minister’s job.

“I give the reinsurance that light will be shed and those who carried out [the assassination] and its intellectual authors will be brought to justice,” he said in the address. “I compliment the Haitian people on their political maturity in the face of what we can call a ‘coup d’etat.’”

Foreign governments and international bodies initially recognized Joseph’s claim as interim prime minister in the wake of the assassination. But on Saturday, an informal bloc of foreign ambassadors and envoys known as the “Core Group” — and that includes the United States — appeared to do an about face, emphasizing the need for a “consensual and inclusive government” put together by “designated Prime Minister Ariel Henry.”

By backing Henry, the Core Group effectively appeared to be withdrawing its support for Joseph, leaving him in a untenable position.

While the agreement appears to resolve the most significant power struggle in the country between two men who had both been appointed to cabinet positions by Moïse, it is unlikely to settle the leadership question for good.

Members of Haitian civil society groups in recent days have sharply criticized the international community for backing Henry, and have insisted on a new interim government decoupled from Haiti’s jostling political parties. Many had been calling for Moïse to step down before his killing, claiming he was in league with the violent gangs that have terrorized the country. They said they would not recognize anyone as interim leader who had been named by Moïse.

“We are indifferent to this news. Ariel Henry was designated prime minister by Jovenel Moïse,” said Samuel Madistin, an attorney and chairman of the board of directors of Fondation Je Klere, a Port-au-Prince based human-rights group. “We don’t have the sense or the conviction that this will change something the failed policies of Jovenel Moïse that brought the country to the failure that we all are witnessing.”

In addition, elected members of Haiti’s nonfunctioning Senate rejected the agreement between the two men. Members of the Senate — it lacks a legal quorum due to a lapsed election schedule — head earlier voted to make the body’s president, Joseph Lambert, the country’s acting president. That attempt has largely been ignored by the international community.

“These maneuvers are carried out outside the Haitian people and far from their interests,” said Patrice Dumont, a senator who did not support Lambert as president either. “The conditions for Ariel Henry’s accession to the prime minister’s office are in total disharmony with the imperatives of our structural flaws and the dangerousness of the economy.”

Henry appeared to nod to the need to win over civil society groups. In his statement released Sunday, he said: “During the last days, I met with compatriots and diverse actors of the national life politics of course but also from the civil society and the private sector. I intend to continue and deepen these discussions, because it is the only way to assemble the Haitian family, to bypass or divergences and antagonism and to witness a different future.”

In a July 10 interview with The Washington Post, Henry — who does not hail from Moïse’s party and was brought in just before his slaying in attempt to build a broader coalition — had described Joseph as his “foreign minister,” a title he had also held at the time of the assassination. He had also described Joseph as being in open “rebellion” against him.

Ariel had suggested that Joseph was seeking to stage a “coup” against Henry’s claim to interim leadership, and said warned that he would use unspecified “leverage” to gain control of Haiti. He also criticized Joseph’s call for foreign troops — made on the day of the assassination in letters to the United States and United Nations — as premature.

Joseph would not say if any pressure had been exerted, and said it remained unclear if he would remain within Henry’s government.

“I am willing to do the transfer of power as quickly as possible,” Joseph said.