A timeline of the assassination of the Haitian president

Several weeks before they were arrested in the July 7 assassination of the Haitian president, 13 Colombian nationals — some of them former military — traveled to the Dominican Republic, the country that shares an island with Haiti, according to Colombian police.

The men arrived in two groups. A group of two traveled through Panama in early May, and a group of 11 traveled directly from Bogota on June 4, according to flight records released by the Colombian police.

At least two of the men visited a popular tourist destination in the capital city Santo Domingo, according to images the police released. Those photos, along with images of the same location from one of the suspect’s social media accounts, are the earliest known images showing the alleged mercenaries were in the same location before the attack.

The Washington Post gathered photos and videos of the suspects and of the hours before and after the assassination to assemble a timeline of how the brazen attack unfolded.

It remains unclear who organized the attack on the Haitian president, Jovenel Moïse. The detained suspects include two U.S. citizens of Haitian descent, identified as Florida residents James Solages, 35, and Joseph Vincent, 55, according to Mathias Pierre, Haiti’s minister of elections and interparty relations. An official who interrogated the pair said Solages claimed he was hired as an interpreter for “foreigners” after applying for the job online. The men and some of their family members claim that they didn’t know the president was going to be assassinated.

Solages told the official they were acting on an order to arrest the president authorized by a judge. He admitted to meeting with the foreigners for about a month, eating at the restaurant inside the Royal Oasis Hotel, 10 minutes from the president’s residence where the assassination took place.

Officials have not yet provided evidence of the detainees’ involvement in the assassination, and questions remain about who launched the attack and why. As of July 10, officials have said that 28 alleged assailants were involved, with 20 captured, three killed and five still on the run.

The attack by the alleged assailants that Haitian authorities have described as “commandos” comes amid months of escalating political instability and gang violence that have critically eroded the rule of law in the Caribbean nation of 11 million. Moïse, 53, dissolved parliament in January 2020 and ruled by decree as opponents and protesters demanded that he step down. Armed gangs with unclear allegiances have seized control of growing portions of the country, terrorizing the population with kidnappings, rapes and killings.

Moïse’s assassination has plunged the country into deeper crisis as authorities search for those responsible.

On Friday, the Colombian police announced that 41-year-old Manuel Antonio Grosso Guarin, a former Colombian soldier, had been detained by Haitian authorities along with 10 other Colombian nationals for their alleged involvement in the assassination. Most were members of the large group that traveled on Flight 252 with Avianca, a Colombia-based airline, and crossed into Haiti by June 6, Colombian police said.

Two Colombian suspects were killed in the attack, Mauricio Javier Romero Medina and Duberney Capador Giraldo. Giraldo and another suspect had flown to Panama from Colombia and then traveled on to the Dominican Republic before continuing into Port-au-Prince, the Haitian capital, in the first half of May, flight records show.

Colombian authorities said they have launched an investigation into the men’s alleged involvement.

Grosso poses for pictures, often accompanied by a group of men, at popular tourist destinations in the city. In a photo released by Colombian authorities, he is seen at the Columbus Lighthouse in the capital.

An image released by Colombian police shows an individual they did not name but identified as a suspect at the same location as Grosso. The image shows at least six men wearing the same clothing as men seen in images shared by Grosso on June 6.

In the background of the photo a man is seen wearing the same clothing as Grosso in photos posted to Facebook and presented by the Colombian police.

The attack occurred around 1 a.m. on Wednesday, July 7, according to the Embassy of Haiti, at Moïse’s residence. Haitian authorities, eyewitnesses and videos indicated the alleged assailants were speaking Spanish and English.

Three videos, filmed at night and alleging to be from the morning of the assassination, circulated online. They all have similar characteristics — black frames with dotted white lights and a person talking through some sort of loudspeaker: “This is a DEA operation.” Haiti’s ambassador to the United States, Bocchit Edmond, said “They were screaming ‘DEA operation,’ but we know it was fake. We know they were not DEA agents.”

Solages told investigators that he called out to the president’s guards, claiming to be from the U.S. Drug Enforcement Administration (DEA).

U.S. officials have strongly denied the claim that the DEA were involved, and Haitian officials dismissed that possibility. Ralph Chevry, a board member of the Haiti Center for Socio Economic Policy in the capital Port-au-Prince, said the audio announcement of a DEA operation “sounded like a ruse, a tactic.”

Video of the security response after the attack shows armed men outside the residence as a car alarm blares. The Journal La Diaspora told Storyful News that one of their reporters filmed the video in the wake of the assassination at the president’s residence.

First lady Martine Moïse was wounded in the attack. She was flown to an airport in Fort Lauderdale, Fla., and is being treated at a hospital in Miami.

The assassination was followed by firefights between suspects and police. At least three suspects were killed. Photos show two bodies inside a car outside a police station.

Photos also show the detained suspects in the bed of a police truck.

Video footage from the official Facebook account of Haiti’s Prime Minister on Thursday shows Grosso and other alleged mercenaries detained.

In a separate video of Grosso, where he and another suspect, bloodied and with their arms bound, are led by a crowd through a residential area, a tattoo is visible, which matches the location of a tattoo in images posted to his Facebook profile.

Interim Prime Minister Claude Joseph announced a nationwide state of siege after Moïse’s death, with security under the control of the armed forces and police. This status provides powers to the government for 15 days to search homes and property, to restrict the right to gather and to control the roads, among other measures. Despite the state of siege, the country faces escalating chaos amid a lack of clarity over who has the authority to lead the country. 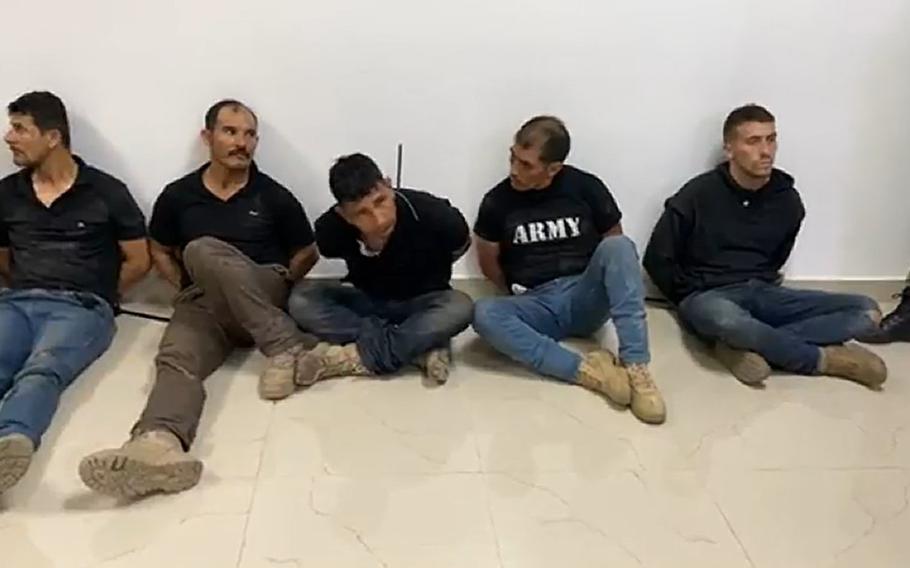