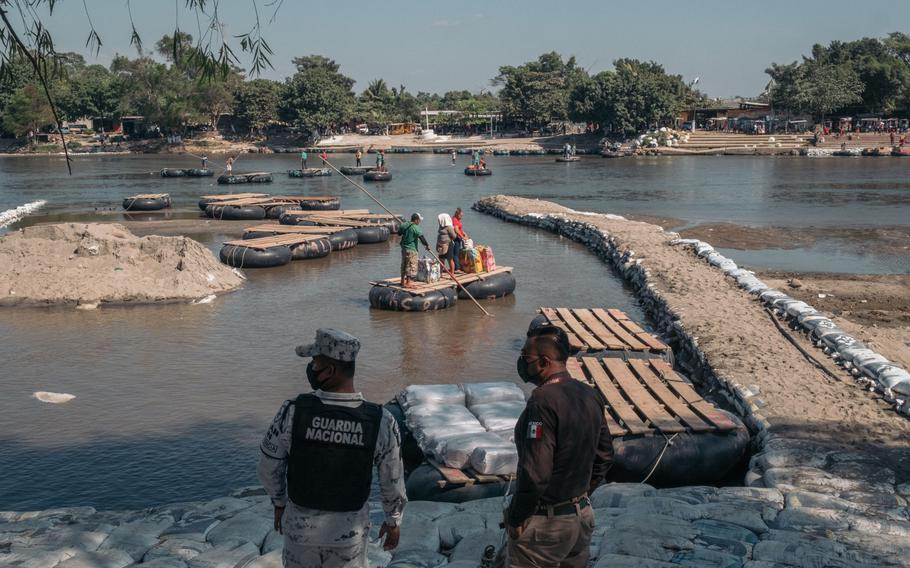 For thousands of Central American migrants, the promise of greater personal safety and economic opportunity is what drives them on arduous journeys north to the U.S. border — not warmer words from President Joe Biden.

“I didn’t know anything about Biden, I didn’t have time to watch the news. We had to flee so quickly,” said Carlos, a 28-year-old Honduran who says violent gangs chased him from his homeland in March.

“I would have stayed if I could, but I just didn’t have a choice,” he said.

He asked that his last name not be published for fear of retaliation from the people who threatened him.

In Washington, Republican lawmakers accuse the president of fomenting a record wave of migrants, blaming his shift to a more sympathetic tone on immigration from the harsh rhetoric of his predecessor, Donald Trump. Yet in El Salvador, Guatemala and Honduras — the three countries responsible for the majority of people detained on the southern border -- crime, economic privation, natural disasters and human smuggling rings are doing far more to fuel the surge than anything said by Biden.

Migration from the region was ticking up months before Biden took office, driven by yawning economic and social disparities between Central America and the U.S. that were exacerbated by the pandemic. From the start of the year through the end of April, more than 237,000 people from Guatemala, Honduras and El Salvador — known as the Northern Triangle — were apprehended trying to cross the southern U.S. border, according to government data.

Those that get into the U.S. find an economy brimming with low-paid jobs that many Americans don’t want, as well as employers willing to tread lightly around questions about their immigration status.

The migrant surge became an early and unexpected political crisis for Biden, who entered office focused on ramping up the U.S. vaccination campaign and boosting the domestic economy. While many migrants are turned away from the border under pandemic protocols established by Trump, tens of thousands have been admitted to immigration proceedings in the country — including scores of children unaccompanied by parents or guardians, who Biden has said won’t be denied entry.

His administration is struggling to address the root causes of migration to the U.S. and has yet to propose any new policy or settle on a strategy.

Biden has assigned Vice President Kamala Harris to lead a diplomatic campaign with the Mexican and Central American governments. She’ll travel to Guatamala and Mexico early next month, after pledging more than $300 million in additional humanitarian aid for Northern Triangle countries in a call with Guatamalan President Alejandro Giammattei in April.

There is no question that Biden has been more welcoming to migrants than Trump. As a presidential candidate, he condemned Trump’s restrictive immigration policies and said all who request asylum at the U.S. border “deserve to be heard.” 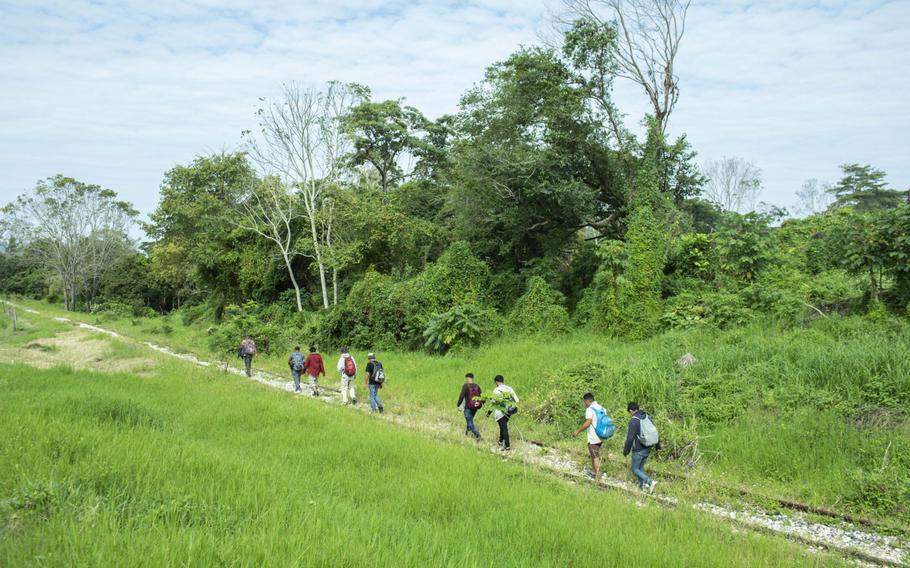 Migrants from Honduras walk along a railway track in Tenosique, Mexico, on March 8, 2021. (Nicolo Filippo Rosso/Bloomberg)

“We’re a nation who says, if you want to flee, and you’re fleeing oppression, you should come,” he said in a September 2019 Democratic primary debate.

In February 2020, he promised that “nobody is going to be deported in my first 100 days” in office, and issued an order suspending deportation on his first day as president. Texas challenged the order in court and won an injunction against its enforcement.

Biden and his top aides dispute that his warmer rhetoric has encouraged migration, and they have repeatedly advised migrants not to try to come to the U.S. now, while the new administration deals with the surge as well as revamping refugee and asylum programs.

“In the shelters early on in 2021, the migrants were very much tuned to what was going on” in U.S. politics, said Marisa Limón Garza, deputy director of the Hope Border Institute, an advocacy group in El Paso, Texas.

Lately, she said, more migrants are getting their information from human smugglers. “Mixed messages abound,” she said.

But she said that migration is driven by “the reality of violence,” government corruption and environmental changes that have made farming more difficult, including climate change and palm oil production.

The Biden administration hasn’t yet hit on a novel solution to the root economic and social causes of migration, but Harris has told her staff to search for new ideas. The administration has placed corruption at the forefront of its strategy, regarding the problem as so pervasive that efforts to spur economic growth and opportunity can’t take without uprooting it.

The administration has also been more aggressive about teaming up with the private sector, both to disburse aid through non-governmental organizations and to persuade companies to lean on regional governments to root out corruption.

Money is only part of the problem.

Guatamala, for example, boasts the largest economy in Central America, according to the World Bank, yet only 40% of its people enjoy food security. Nearly a million more Guatamalans — about 6% of the population — may have been plunged into poverty by the pandemic, the bank estimates.

Honduras and El Salvador are even worse off economically, and the leaders of the two countries have troubled relationships with the U.S. Honduran President Juan Orlando Hernandez has been accused by U.S. prosecutors of drug smuggling, while El Salvarodan President Nayib Bukele was criticized earlier this month by U.S. Secretary of State Tony Blinken after his party sacked five of the country’s top judges and the attorney general in a move to consolidate his political power.

All of the region’s governments benefit financially from migration, leading to accusations from U.S. politicians that they have little incentive to help stop it. Remittances from Mexicans and Central Americans in the U.S. are a significant source of income for families back home. In 2020, Mexico received $42.9 billion, while the three Central American countries together received $22.9 billion, according to the World Bank.

“You won’t see a real solution until we start to address some of the fundamental issues in these southern countries,” said Victor Manjarrez, associate director at the Center for Law and Human Behavior at the University of Texas El Paso, who served as a Border Patrol agent for 35 years. “And that isn’t just sending money because we’ve been sending money to Guatemala, El Salvador, Honduras for decades now. And the problem’s still there.”

The U.S. earmarked more than $3.6 billion in aid for the region from fiscal 2016 to 2021, according to the Congressional Research Service. Trump suspended financial assistance for more than a year in 2019 as leverage in negotiations with Northern Triangle governments over border security and asylum agreements.

The suspension set back many aid programs, “making it difficult to assess the effectiveness of U.S. assistance efforts in the region,” CRS said in a report updated May 13.

Layered over the economic catastrophes is endemic violence. El Salvador is burdened with the highest murder rate in the world, and both Honduras and Guatamala are also in the top 20, according to the United Nations.

Carlos, the Honduran migrant, said that back home he used to make $200 in a good week selling cooking gas door-to-door. He was able to send his two daughters to a good school.

But in October, local gangs began demanding bribes that forced him to deplete his savings and take out loans. Ultimately, he decided to uproot his family and flee.

He made it across the U.S. southern border but was apprehended and expelled to Juarez in Mexico. Like many other migrants, he had hoped to reconnect with family in the U.S. who had made it over the border before him. Now, as he awaits news on his asylum case at a local shelter, he tries to be optimistic.

“The only reason I came is to take care of my family. I know there’s work there. I like to work, in whatever job that might be,” he said over the phone in Spanish, occasionally crying.