Workers protesting work force cuts at US base in Africa 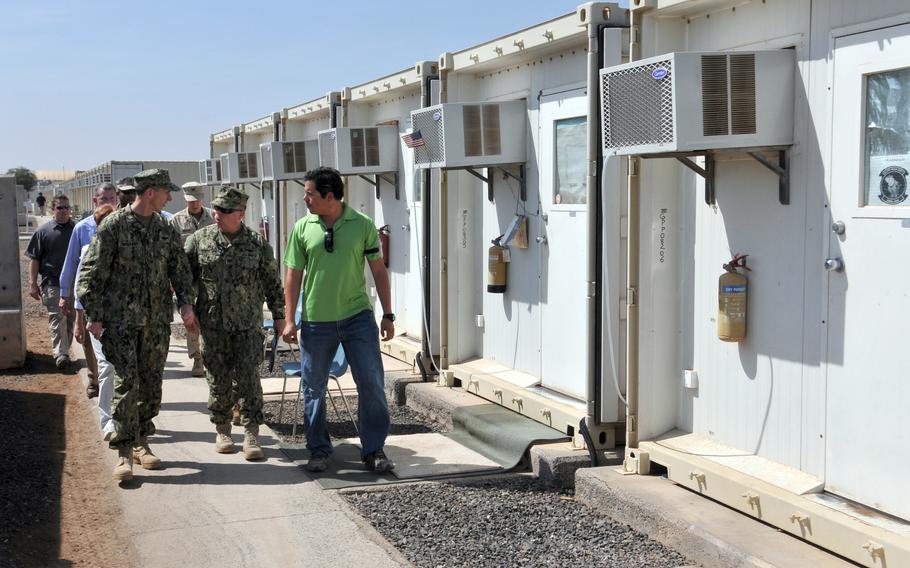 Adm. Jonathan W. Greenert, chief of naval operations, and then-commanding officer of Camp Lemonnier Capt. Kevin Bertelsen walk with Billeting Supervisor Carlos Garces on a tour of the camp living quarters last year. The base has been the site of regular protests recently by workers angry over layoffs. (U.S. Navy)

STUTTGART, Germany — Hundreds of workers angry over mass layoff plans are on strike and staging daily protests outside Camp Lemonnier, the strategically placed U.S. military base in Djibouti on the Horn of Africa, officials said Wednesday.

In June, the military entered into a $35 million contract with base support services provider KBR, which took over responsibility for operations from a previous contractor. KBR planned to cut its base operation support staff from 1,000 to 600 workers, who conduct a range of activities such as janitorial, laundry and food service work, according to a U.S. Navy spokesman, who said the previous contract cost $80 million per year. That plan prompted the remaining 600 workers to strike.

While some 97 local national and third country staffers operating under a separate contract continue to work at Lemonnier, the other Djiboutian workers have walked off their jobs altogether to protest KBR’s planes to reduce its base support staff by 400 employees, according to Lt. Cmdr. Rob Johnson, a Navy spokesman.

“It’s my understanding that some third-country nationals have been coming in to fill some of those jobs,” Johnson said.

Still, the result has been longer lines at the dining facility, longer waits for laundry service and slower trash pickup, Johnson said. “They say it’s been an inconvenience more than anything else,” he said.

Camp Lemonnier supports roughly 4,000 U.S. and allied military and civilian personnel along with about 1,100 local and third country nationals, according to the Combined Joint Task Force-Horn of Africa Web site.

Negotiations aimed at resolving the dispute are continuing, Johnson said.

“I can’t speak for KBR’s reasoning,” he said. “We don’t tell them how many people to employ or how to employ them.”

“The protests have been by local nationals who have been requesting they (KBR) not reduce the force,” Johnson said. “They’ve been peaceful protests. They’ve been holding up banners. They express different ideas. They say they support the U.S. military, but they want their jobs.”

On average, about 100 workers take part in the protests each day outside the base, he said.

KBR said it is working on resolving the dispute.

“KBR is in contact with the U.S. Navy regarding this situation. KBR is working closely with the Djibouti Minister for Labour and Minister for Foreign Affairs and is confident a resolution will be found in the near future,” company spokesman John A. Elolf said in a written statement.

Camp Lemonnier, the U.S. military’s only official and permanent base in Africa, serves as the headquarters of Combined Joint Task Force-Horn of Africa, which is focused on countering violent extremists in Somalia and around the Horn of Africa.