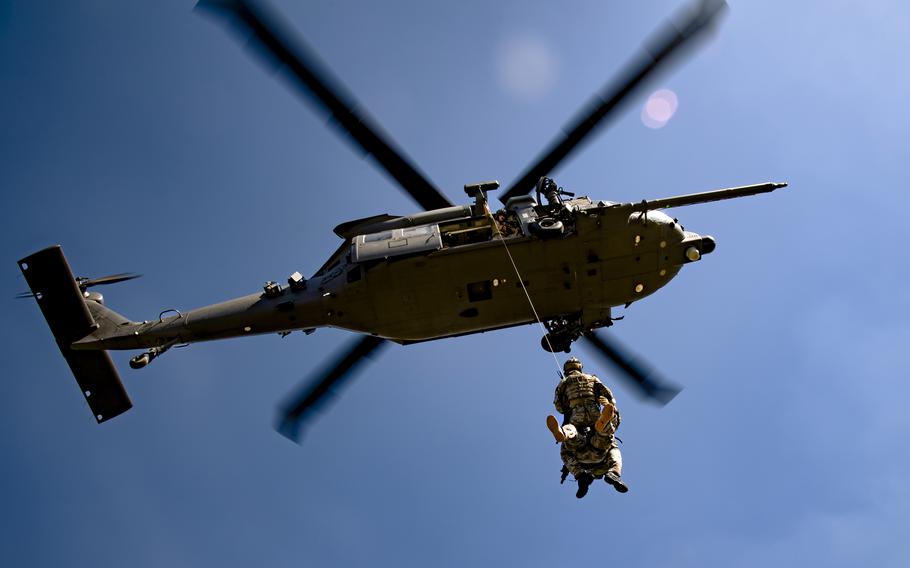 Airmen assigned to the 41st and 38th Rescue Squadrons conduct hoist training at Moody Air Force Base, Ga., in March 2022. In December, U.S. Air Force pararescue troops and other quick reaction forces launched a rescue operation at an undisclosed location in the Horn of Africa that saved two people. (Devin Boyer/U.S. Air Force)

STUTTGART, Germany — Elite U.S. Air Force pararescue troops and other quick-reaction forces were involved in the rescue of two people at an undisclosed location in the Horn of Africa, military officials said Thursday.

The mission, carried out in late December, entailed a sizable force that included an HC-130J recovery aircraft, Guardian Angels from the 347th Rescue Group and combat rescue helicopters, the 435th Air Expeditionary Wing said in a statement.

“Alert crews were activated during the pre-dawn hours and responded quicker than the required theater response times,” said the Ramstein, Germany-based wing, which has forward-based units in Africa.

The rescue team operated under the command of the 449th Air Expeditionary Group and the Joint Personnel Recovery Center.

The two people rescued were from a partner force, the 435th wing said in a statement. The military declined to say what country the troops were from, but the U.S. provides a wide range of assistance to Somalia’s military. In the Horn of Africa, the U.S. operates out of Djibouti, home to Camp Lemonnier, and in neighboring Somalia, where U.S. special operations troops work with forces involved in a decadeslong fight against Islamic militants.

In recent years, U.S. troops also have come under occasional attack in Somalia, where they have operated out of remote military outposts.

The December rescue was “in and out” of the undisclosed area “without incident,” the statement said.

Rescuers rushed to the nearest medical facility for surgery, according to the air wing.

The HC-130Js were then called to move the more seriously wounded person to another location for further treatment. Both injured people survived, the wing said.

“While personnel may be behind enemy lines or far from needed support, this team is equipped to travel great distances and fight their way in and out if necessary to make the mission happen,” Ronnau said in the statement.