Africa summit boasted progress, though differences with US remain 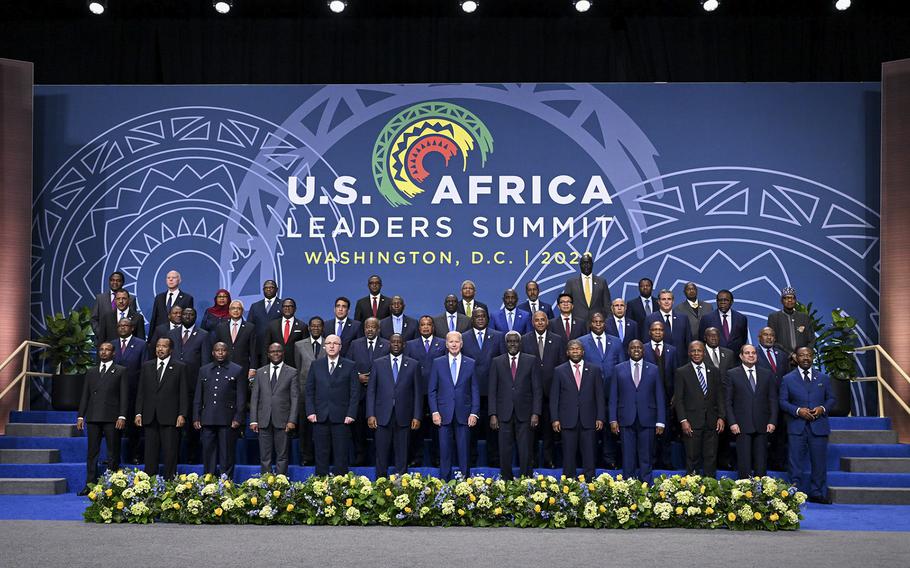 President Joe Biden stands in the center front row in a group photo during the U.S.-Africa Leaders Summit at the Walter E. Washington Convention Center in Washington, D.C. on Thursday, December 15, 2022. (Ben Solomon/U.S. Department of State)

WASHINGTON - With America's checkered history in Africa, the continuing coronavirus pandemic and other competing crises, perhaps it's understandable that President Biden's plans for a grand Africa summit would draw skeptics.

But while differences between the United States and the more than 50 nations on the continent remain, the negative predictions evaporated in the face of international bonhomie at this week's U.S.-Africa Leaders Summit in D.C.

"There were a lot of doubters both here in the U.S. and in Africa about the prospects for a successful U.S.-Africa summit," said Melvin Foote, president and CEO of the Constituency for Africa, an interest group. "I had heard that less than 20 countries would attend. Well, 49 African leaders are here," he said, plus many other government, business and civil society representatives.

As they gathered at the Walter E. Washington Convention Center on Thursday, Biden told them: "I'm looking forward to hearing more from all of you about the issues and priorities that matter most to Africa and how we can deepen our cooperation. And I emphasize 'cooperation.'"

He announced plans for $55 billion in U.S. investments in Africa over three years. The United States provides more foreign aid than any other country, according to the intergovernmental Organization for Economic Cooperation and Development, but as a percentage of national wealth, this nation ranks near the bottom.

Biden, Vice President Harris and other administration speakers repeatedly stressed that any action would be taken with African leaders. They know the big-foot reputation the United States gained during the Cold War and cases where Washington was on the wrong side of history, such as the Reagan administration's backing of apartheid leaders in South Africa before democracy there was won with Russian support, not to mention President Donald Trump's profane disdain for African nations with his "shithole countries" remark.

Now, U.S. support for Africa cuts across the government. There are at least 14 federal agencies, not including the intelligence community, actively involved on the continent. One that doesn't get much notice is NASA.

At the first U.S.-Africa Space Forum on Tuesday, U.S. officials, including NASA Administrator Bill Nelson, celebrated Nigeria and Rwanda as the first African signatories, out of 23 nations, to the Artemis Accords that set guidelines for space exploration cooperation.

Space also has been in the thick of dealmaking between Africa and U.S. companies - a big theme for the summit. Among the deals discussed at the space forum was an agreement between Rwanda and Atlas Space Operations for large satellite antennas, and daily satellite imagery by Planet Labs to help with droughts, forest management, energy issues and high-speed internet. Zipline, an aerial logistics company, expects to use space data to "conduct more than two million instant deliveries across Rwanda by 2029" using drones, according to the White House.

"Looking for near-term, pragmatic options, US-Africa space cooperation should be thought of as building another type of infrastructure, like roads or power," Rose Croshier wrote in one of several pre-summit blog posts by the nonpartisan Center for Global Development (CGD), adding, "With the African space industry valued at $19.49 [billion] in 2021, new economic US-Africa engagement could happen across multiple channels - as investors, suppliers, business partners, or as customers."

The focus on increased dealmaking contrasts sharply with reality. U.S.-Africa bilateral trade "has been in consistent decline, from a high of $141.9 billion in 2008 to $64.3 billion in 2021," even as trade between China and Africa grew to $254 billion in 2021, a 35 percent increase, according to another CGD blog post, by W. Gyude Moore and Erin Collinson.

Increasing cooperation in space also contrasts sharply with the difficulty of African visitors getting into the United States, making dealmaking hard.

"The wait time for a visitor visa appointment in Nigeria, Africa's largest economy, is now 666 days; waits of at least three months are now common at US consulates across the continent," said a CGD post by Todd Moss and Jeremy Neufeld. The problem is so bad that "the administration had to create a special visa track for participants in the White House's own summit from civil society and the business community."

This is a long-standing problem. A 2017 U.S.-Africa trade conference was canceled because African participants were denied U.S. visas.

State Department officials "recognize that waiting longer than a year for a tourist visa is unacceptable" and are working to correct the problem, the agency said in a statement. The median wait globally now is about two months, the department said, half the delay in June. It did not provide Africa-specific data.

Humanitarian aid is a well-known part of the government's approach to Africa, but more must be done, according to the International Rescue Committee. During the summit, it released an "Emergency Watchlist" of countries at "greatest risk of new humanitarian emergency." The organization is pushing for more federal humanitarian aid, stronger protection for civilians in conflict areas and humanitarian exemptions for sanctions imposed by Washington.

Related to that point, African leaders are angry about legislation sponsored by Rep. Gregory W. Meeks (D-N.Y.), chairman of the House Foreign Affairs Committee, that would "hold accountable the Russian Federation and African governments and their officials who are complicit in aiding such malign influence and activities." Those activities are defined as those that undermine "United States objectives and interests."

When the House approved the legislation, Meeks said it is "a demonstration of how Putin's war in Ukraine, and the Kremlin's corrupt and illicit activities in Africa to fund that war and other exploits, have worked to unify Congress and the international community."

That wasn't Meeks's focus when he told the summit's Young Leaders Forum on Tuesday that he has "consistently advocated for a U.S. foreign policy that aims to strengthen our relationship with our African partners."

But his legislation would do exactly the opposite, something a determined Macky Sall - the Senegalese president and chairman of the African Union - made sure Biden understood. "This would damage the relationships between the U.S. and Africa," Sall said, "and we don't want this to happen."

The Pentagon has long had relationships in Africa, often in the form of troops supporting local anti-terrorism efforts. That was the first priority Sall mentioned to Biden. Africa wants to be "an integral part of the . . . struggle against this blight," Sall said. "Mr. President, we expect a strong commitment on this vital priority and support from the United States so that the U.N. Security Council places the fight against terrorism in Africa in the framework of the collective security mechanism that is in the U.N. Charter."

Yet the Defense Department wants to be known for more than boots on the ground, though that's the image its television commercials push.

In preparation for the summit at press briefings last week, Pentagon officials emphasized the "three D's" - defense, diplomacy and development - and that leadership of the Pentagon's Africa Command (ironically based in Germany) includes the State Department and the U.S. Agency for International Development.

"To be clear, the U.S. has always supported the three D's and has always thought about things in a very symbiotic fashion," said Chidi Blyden, U.S. deputy assistant secretary of defense for African affairs. "I think the emphasis this time around is going to be that we are going to do this in collaboration, conjunction, coordination with African partners," advertising three C's to accompany the three D's.

When Biden, Harris and other top administration officials visit Africa next year, as Biden promised at the summit, they can put the alliterative policies into practice.

They and others left the summit feeling good, while knowing more action remains.

"In both the policy circles and in conversations with attendees, people are pleasantly surprised by how much went into this and the number of initiatives introduced," the CGD's Moore said by email. "If I were the administration, I'd be proud. It looks like a success to me. Whether all of these commitments are met is for another day."