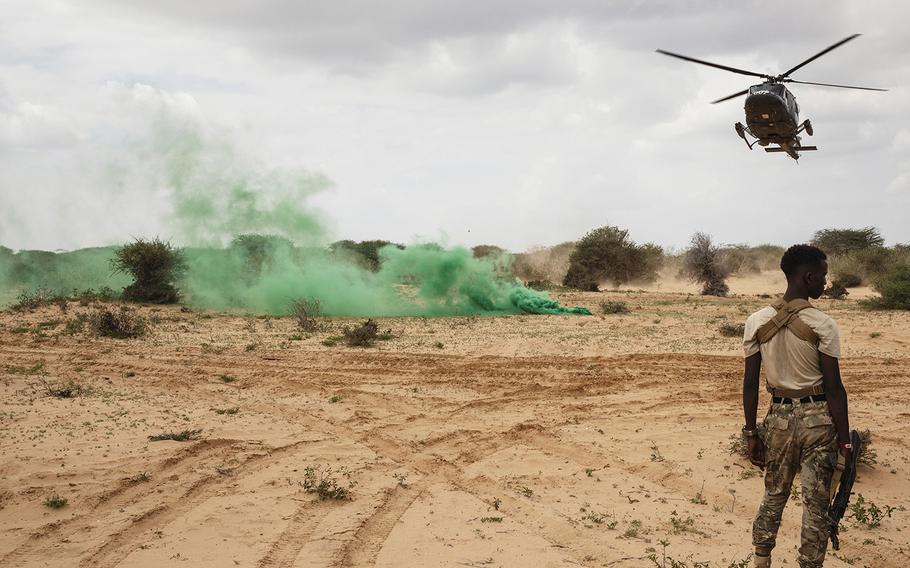 BAXDO, Somalia - A determined but often chaotic uprising by clan militias supported by Somali government troops has forced the al-Shabab militant group, one of al-Qaida's wealthiest and strongest global affiliates, onto the back foot, say Somali and U.S. officials.

Political infighting in the Somali government had stymied any military offensive against al-Shabab for the past three years, allowing the group to consolidate its control over parts of Somalia. But after elections were held in May and the new government put its backing behind some of the clans in central Somalia, their militias began to claw back territory, taking over insurgent checkpoints previously used to extort money and bases used to launch attacks.

"What we're seeing is really large scale combat operations taking place in Somalia and incorporating the clans in a way that we just have not . . . seen," said Rear Adm. Milton Sands, who heads U.S. Special Operations Command Africa, in an interview. "I'm really optimistic."

Clan militias have fought the insurgency before, but it is the first time they have had such extensive military backing, and that support is now encouraging many aggrieved Somalis to join the militias and fight.

"I've been in and out of Somalia for 13 years, and I've never seen the federal government, member states and clans all angry and so united to finish al-Shabab," said Gen. Keith Katungi, the acting force commander of the African Union peacekeeping force. "This is the first big Somali-led offensive."

Local militiamen in several towns said they recently joined the battle against the militants for a raft of reasons. One man said he did so after al-Shabab confiscated 60 of his camels, representing his life savings, when he had refused to join the militants. Another said he joined the fight after al-Shabab seized his nephew and other children to train as fighters. Yet another man said his 12-year-old brother had been wounded in an al-Shabab bombing, while others said they were motivated by the killing of relatives, religious differences or heavy taxes imposed by militants.

Some fighters said they and their families had been fighting al-Shabab for years. But now they felt buoyed because the Somali government had begun to provide supplies and deploy troops to fight alongside the militias.

The militias and government forces have taken more than 20 settlements in the Hiran and Middle Shabelle regions of central Somalia in the past five months, pushing the insurgency out of two main areas. Those forces have successfully held bridges and larger towns that have been recaptured.

But a few smaller villages have changed hands repeatedly as al-Shabab has carried out counterattacks or overstretched Somali government forces pulled out. 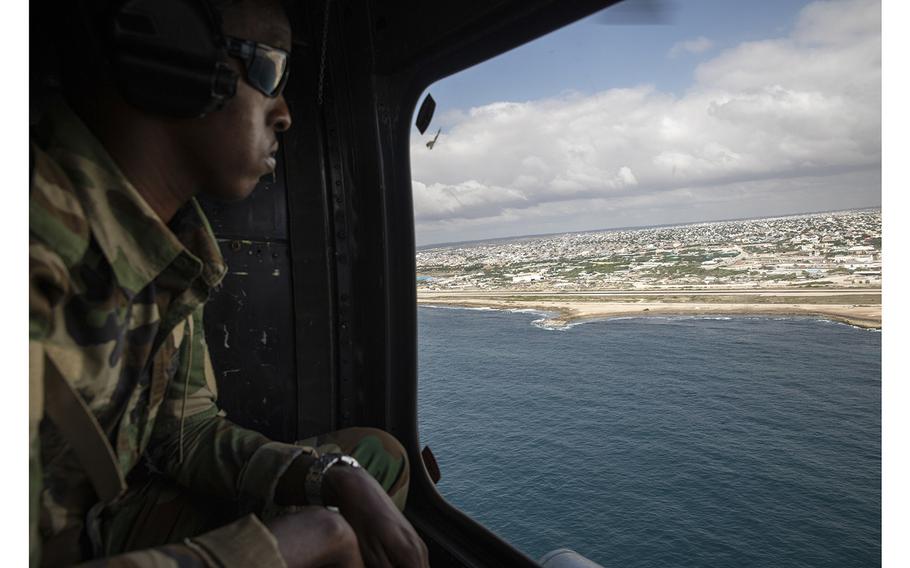 A soldier with the African Union Transition Mission looks at the landscape from a helicopter leaving Mogadishu for Masjid Ali Guduud, Somalia. (Malin Fezehai for The Washington Post ) 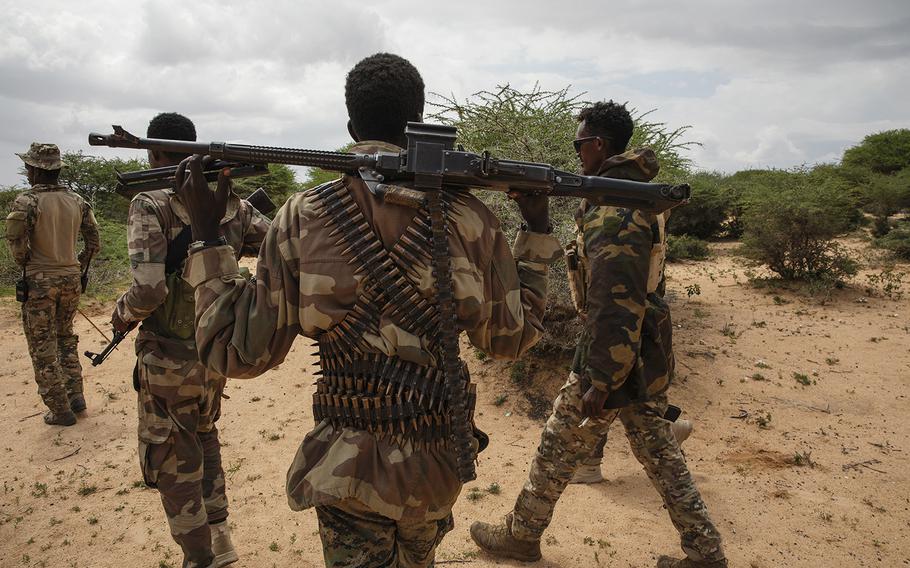 "If al-Shabab leave their mind-set, we can welcome them back," he told the crowd. "But if they stay, they must be destroyed."

Al-Shabab militants had attacked Baxdo three times this year. The town had fallen to al-Shabab for a few hours in January before the local, heavily armed clan militia regained control. The militia repelled subsequent attacks in June and September. Car bombs from the last battle engraved starbursts into the cream walls of the main mosque. Bullet holes still pocked the tall minaret.

Earlier this year, as the militants had pressed toward Baxdo, they had forced the people newly under their control to pay heavy taxes. That provoked growing fury, stirring local clans to turn against al-Shabab.

After Mohamud was chosen as president in May, he quickly tried to rebuild old alliances, meeting regularly with regional officials and cultivating militia leaders. In Baxdo, clan leaders were ready to make common cause. The Biden administration in May also ordered the return of hundreds of U.S. troops to Somalia in support of government forces, reversing President Donald Trump's pullout in late 2020.

Somalia's clans have always been strong and are the only source of security and social welfare for most people. Almost all the militias currently fighting al-Shabab have kinship ties to the president.

A month after the new government took power, Somali special forces known as Danab and clan militias demonstrated they could work together by pushing back al-Shabab after the militants had seized a key road in Hiran region. Al-Shabab retaliated by blowing up water wells and phone towers and killing residents.

In August, Danab scored another success in a battle with militants in the town of Hess, according to Major Aydarus Mohamed, the 6th Danab Battalion commander. "The locals were already angry," he recalled. "They said, 'If you want these guys, they are over there.'" The gunfight lasted less than an hour and as night fell, the militants began to move from their position, exposing them to a U.S. airstrike.

Many local residents, inspired by al-Shabab's defeat in Hess, took up arms as part of the clan militia, he said. "In the morning, the locals came to us and said, 'We want to fight with you,'" Mohamed said. "They were very cheered by the government soldiers and the airstrike."

"After that, there was no going back," he said. 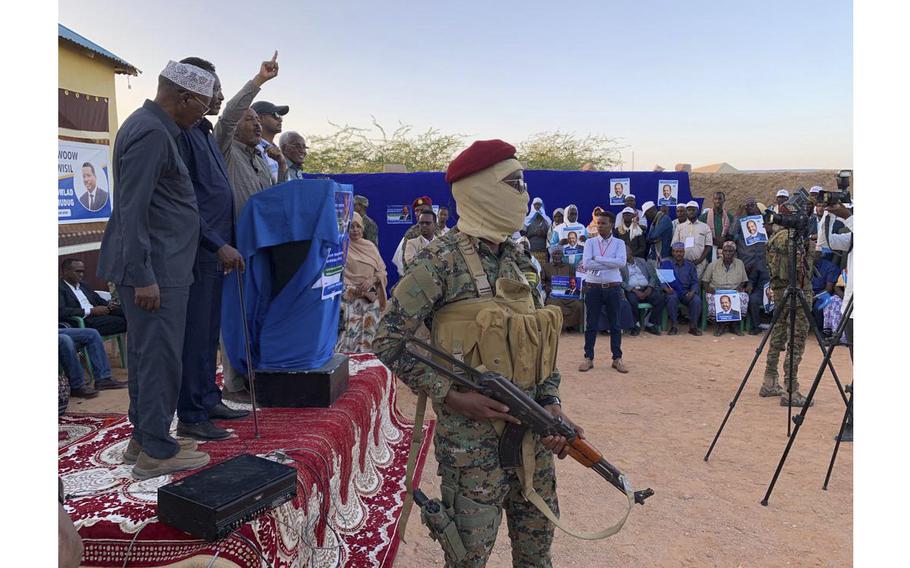 Newly elected President Hassan Sheikh Mohamud speaks in Wisil during a whistle-stop tour of central Somalia, where a determined and often chaotic uprising by clan militias supported by government troops has forced al-Shabab, one of al-Qaeda’s strongest global affiliates, onto the back foot. (Katharine Houreld/Washington Post) 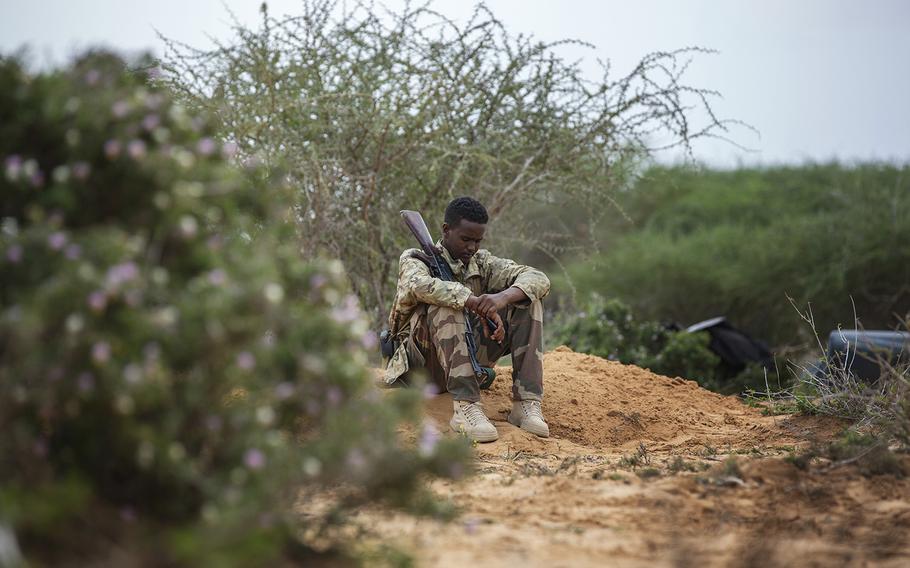 A soldier sits in a military camp in Masjid Ali Guduud. (Malin Fezehai for The Washington Post )

Some regional experts warn that government backing for clan militias could backfire.

"The communal militias that have pushed al-Shabab out are eventually going to start pushing their own agendas. It's been a pattern over the last decade," said Paul D. Williams, a professor of international studies at George Washington University.

Somali National Security Adviser Hussein Sheikh Ali played down those worries, stressing that the government is not providing militias with weapons, just ammunition, fuel and food. The military, he said, should accompany militias and initiate any offensive action, ensuring that clan forces are focused on al-Shabab rather than rivals.

"We cannot claim we will eliminate clans fighting," said Defense Minister Abdulkadir Mohamed Nur. "But we are constantly having meetings with them to make peace and persuade them to fight al-Shabab together," he said.

Often, those efforts work. A clan fighter in Wisil in central Somalia said that the military had brokered a deal to let them to fight al-Shabab for three months on the land of a neighboring clan - which was previously impossible.

But sometimes they fail. Last month, two subclans, both allied with the government, fought each other for two days just north of the town of Adale, leaving 37 people dead. The government sent elders to make peace.

"Al-Shabab . . . are trying to provoke such incidents," said former minister of security Abdullahi Mohamed Nor, who was in the delegation of elders. "We are trying to solve them."

The military has also been seeking to maintain a distinction between its forces and the militias. But lines often blur. One man in the town of Maxas said three of his brothers are soldiers, and two clan militiamen. "There is no difference between them! None! Before, we were on our own, but now the government is with us," said Hassan Kafi Farah. Soldiers stand in an empty jail where al-Shabab is believed to have imprisoned people, in Masjid Ali Guduud. Names and phone numbers were scrawled on the walls. “They thought they were going to die, that’s why they wrote their names,” explained a soldier. (Malin Fezehai for The Washington Post ) A Danab vehicle drives through town in Masjid Ali Guduud that was recently taken back from al-Shabab control in Somalia. (Malin Fezehai for The Washington Post )

The joint campaign by the military and the clan militias has not always been smooth.

Sometimes, the clan militias move too quickly. Five soldiers and two militia fighters said in interviews that clan fighters last month tried to capture the militant-held town of Masjid Ali Guduud, near the coast, without military backup. Six militia fighters were killed and others wounded during a six-hour gun battle.

It took three drone strikes by Turkish forces, which support the Somali government, and the approach of the military before al-Shabab pulled out of the town. Charred wire rings still remain at several intersections where they set tires alight to shroud their escape.

The militants left behind an empty jail, where those dealt harsh punishments had been imprisoned. Names and phone numbers were scrawled on the walls. "They thought they were going to die, that's why they wrote their names," explained a soldier.

In some cases, the military cannot hold the towns that it and its clan allies take. Somali soldiers supported by clan militiamen walked for three days, under attack along booby-trapped roads, to capture the town of Waxbo in mid-November. But they did not have the numbers to hold the town. Al-Shabab took it back four days later.

The military and clan forces also took Bukure town in August, said resident Nuur Abdi Elmi, after a two-hour battle where "gunfire was pouring like rain." But troops left hours later. Al-Shabab militants returned. They burned homes, stores and water pumps. The army has since returned, he said. 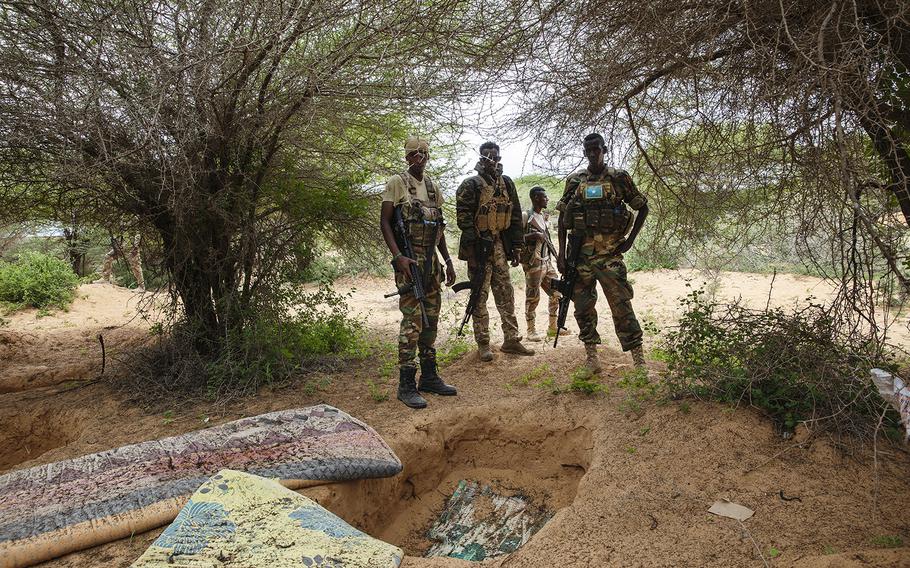 Danab and Gorgor soldiers stand near a former al-Shabab camp in Masjid Ali Guduud, an area recently taken back from al-Shabab control in Somalia. (Malin Fezehai) A Danab vehicle travels in Masjid Ali Guduud, an area recently taken back from al-Shabab control by the military in Somalia. (Malin Fezehai for The Washington Post )

While the uprising by the clan militias has injected the struggle against al-Shabab with new energy, the battle ultimately has to be won off the battlefield.

Mohamud says he is aiming to fight ideologically and financially. The government has recruited al-Shabab's former co-founder Sheikh Mukhtar Robow, who once had a $5 million U.S. bounty on his head, as the minister for religion. He has condemned the insurgency.

Cutting off cash could be the hardest part. The Hiraal Institute, a think tank based in the capital Mogadishu, estimated al-Shabab collects $15 million monthly, largely through taxation and extortion and even extracts taxes from government-held areas. The government has forbidden payment. Few business people say they will obey.

"Can the government guarantee I will not get shot if I do not pay my taxes? No!" said one businessman, who spoke on the condition of anonymity for fear of retaliation.

Mohamud also wants to provide services in newly captured towns. But Somalia's budget is tiny, corruption remains rife and local demands are sometimes excessive. In Maxas, for example, local leaders asked for an airport during the president's visit. He promised to provide one.

Defeating al-Shabab requires reliable government services and justice, said Mohamed Mubarak of the Hiraal Institute. Al-Shabab still has lots of support. A key reason, he said, is that the group offers harsh but fair arbitration of legal disputes and enforces its decisions. The government does not.

"The clan militias are not a silver bullet," he said. "It's easy to go to war. It's hard to build institutions."

Mohamed Gobobe contributed to this report.