The scandal that could sink South Africa’s president 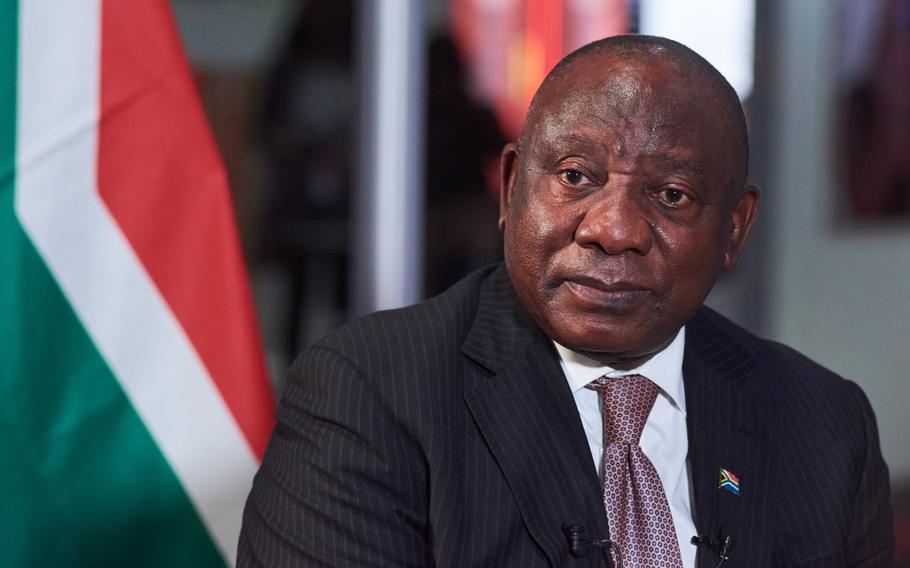 Cyril Ramaphosa, South Africa’s president, during a Bloomberg Television interview at the South Africa Investment Conference in Johannesburg, South Africa, on March 24, 2022. The South African rand is up more than 7% this year, reversing losses seen at the end of 2021. (Waldo Swiegers/Bloomberg)

South African President Cyril Ramaphosa has become embroiled in a scandal almost five years after he took office with a pledge to fight corruption. The bizarre case began in 2020 with the theft of cash that robbers had found stuffed into a sofa at his game farm. A panel headed by the nation’s former chief justice found there may be grounds for impeaching Ramaphosa because of the way he handled the matter. The crisis risks scuppering the 70-year-old leader’s political career and adds to the woes of a country that’s contending with unprecedented power outages, rampant unemployment and surging living costs.

1. What’s Ramaphosa alleged to have done?

The furor erupted in June when Arthur Fraser, South Africa’s former chief spy, laid criminal charges against Ramaphosa, accusing the president of concealing the theft of more than $4 million from the farm in the northern Limpopo province in February 2020. Fraser said the suspected thieves were illegally detained and interrogated by presidential security staff. Opposition parties questioned why Ramaphosa had so much cash lying around his home and whether he had violated tax and foreign-exchange rules. The police, the graft ombudsman, South African Revenue Services and the central bank all began investigations. Parliament appointed a three-member advisory panel headed by former Chief Justice Sandile Ngcobo to determine if lawmakers should examine whether there were grounds for Ramaphosa’s dismissal.

2. What did Ngcobo’s panel find?

While it didn’t explicitly call for the president to be impeached, it found that he may be guilty of serious misconduct and should be subjected to a parliamentary investigation. It said Ramaphosa had “thrust himself into a situation where there was a conflict of interest between his official responsibilities as the head of state and as a businessperson.” It also concluded that the source of the stolen foreign currency remained unclear, that the crime wasn’t properly reported to the police and that there was a “deliberate intention” to ensure that it wasn’t openly investigated.

3. What does Ramaphosa say?

In a 138-page submission to the panel, he declared that $580,000 he earned from the sale of buffalo to a Sudanese national was stolen from his farm in late 2019 while he was in Ethiopia attending an African Union summit. The farm manager initially stored the money in a safe, but later transferred it to a sofa in a spare bedroom in the president’s private house because he thought it was the safest place to keep it, according to Ramaphosa. He said he reported the theft to the head of the Presidential Protection Service. The president denied all the allegations against him, saying he never violated his presidential oath or broke the law.

Ramaphosa may resign of his own accord. If he doesn’t, the leadership of the governing African National Congress is likely to make the next move. It can either reject the panel’s report and instruct its lawmakers to vote against adopting it at a parliamentary sitting scheduled for Dec. 6, or approve it and give the green light for a parliamentary inquiry. In that case, a panel of lawmakers would be constituted to reassess the case against the president, a process that could take months or even years. Its findings would then be presented to the National Assembly, which would vote on how to proceed. Impeaching the president would require the backing of two-thirds of lawmakers. There’s also the possibility that the police could lay criminal charges against Ramaphosa which, under ANC rules, would force him to step down. If he does quit, he’s likely to be replaced by his deputy, David Mabuza, until the National Assembly elects a replacement.

5. What does this mean for South Africa?

The political uncertainty has unnerved investors and financial markets, with the rand tumbling in early December after the release of the panel’s report. Ramaphosa is one of the country’s most experienced politicians. A former labor union leader who made a fortune after going into business, he helped to negotiate an end to White-minority rule in the early 1990s and led a panel that drafted the country’s first democratic constitution. Since taking office in 2018, he’s made some headway in tackling the graft that became endemic during his predecessor Jacob Zuma’s nine-year rule. Ramaphosa has no obvious successor, and any talks to find a permanent replacement wouldn’t begin until after an ANC conference scheduled to start on Dec. 16.