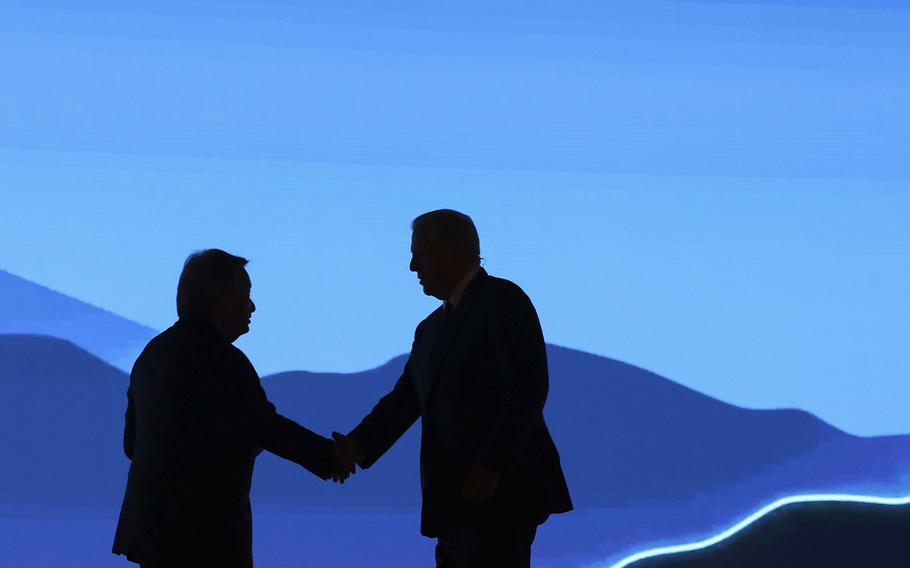 SHARM EL-SHEIKH, Egypt — The European Union's top climate negotiator on Friday morning pitched the bloc's plan to tie disaster funding with emissions reductions as a final offer to avoid failure in the dwindling hours of the world's annual climate summit.

The U.N. Climate Change Conference, also known as COP27, began what was supposed to be its last day with major uncertainties. Even as the conference venue ran low on food and water, participants were bracing for negotiations to drag on long past their scheduled 6 p.m. conclusion.

But diplomats got their first glimpse of an overarching "cover decision" Friday when the meeting's Egyptian hosts published a document that reiterated the need for rapid emissions cuts to meet the world's warming targets but showed little progress on the meeting's most contentious issue: funding for developing countries harmed by a warming world.

Another draft proposal circulated late Thursday laid out three possible resolutions to the impasse. Nations could agree to establish a dedicated fund this year, continue negotiations with an eye toward setting up the fund at next year's COP or commit only to "new and enhanced funding arrangements" without settling on a designated fund.

Ghanaian climate envoy Henry Kokofu, who represents a coalition of hard-hit countries called the Climate Vulnerable Forum, said his group supports the first option, which is also backed by developing nations, small island states and a group of Latin American and Caribbean countries.

But Kokofu said it is not enough for developed nations to agree to a fund - they must also commit to paying into it.

"Without an actual commitment to funding, we may well just end up with an empty bank account," Kokofu said.

Frans Timmermans, lead negotiator for the European Union, said the E.U. plan offered late Thursday night is as far as the bloc can go. He said it would concede to developing nations' unequivocal demand for a designated fund to compensate them for the destruction caused by climate change, and in return would require all countries to start reducing their planet-warming emissions by 2025.

"I have to say this is our final offer," Timmermans told reporters Friday morning. "This is about not having a failure here. We cannot afford to have a failure. Now, if our steps forward are not reciprocated, then obviously there will be a failure."

The E.U. compromise would put pressure on every major negotiating power at the annual summit. China and India would have to take new steps to curb escalating emissions that they have been reluctant to agree to. Hard-hit nations would get a fund but face potentially years more of negotiating on money to fill it. And language specifying that only "particularly vulnerable countries" could draw on the fund may fracture the negotiating bloc of more than 100 developing nations that helped push this issue onto the conference agenda.

The United States spent years trying to block this type of funding for "loss and damage" - parlance at these talks for the irreversible, unavoidable impacts of climate change, often most severe in poor countries and in part fueled by emissions from industrialized nations. About a quarter of all greenhouse gases released in the atmosphere have come from the United States.

But U.S. opposition has softened this year, and Timmermans said U.S. officials Thursday night were very interested in how the European financing proposal would require nations to commit to emissions reductions.

At a meeting of ministers Friday morning, U.S. and Japanese representatives said they would back the third, least concrete option listed in the draft loss and damage proposal - which would commit them to "new funding arrangements" but not a dedicated fund.

It is also unclear whether China - the world's largest annual emitter and the source of 13 percent of historical emissions - will embrace the loss and damage deal. Under the original U.N. Framework Convention on Climate Change, agreed in 1992, China is considered a developing nation and is not expected to provide financial support to other countries in need. But the world is supposed to reassess which nations are in a position to supply funding as part of negotiations over how much climate finance is needed after 2025, raising the possibility that China may end up on the hook for loss and damage payments.

Asked whether China's abstention from any fund could doom the deal, German foreign minister Annalena Baerbock said her country supported a finance system that "includes the biggest emitters" and maintained an incentive for nations to also curb their emissions.

Without mentioning China by name, she said, "Some countries would like to continue to play by their own rules. They do not want to talk to one another, or talk to others behind closed doors."

But civil society activists - those who have long advocated for industrialized nations to pay for climate harms - view the debate about China's obligations as a "poison pill" that could derail the negotiations.

"Trying to tie the fund to other important issues that this COP needs to resolve won't help with the politics of actually establishing the fund here," said Mohamed Adow, executive director of the Kenya-based nonprofit Power Shift Africa.

He added that the United States remains the biggest obstacle to loss and damage funding - as well as humanity's overall warming goals. The United States is the world's biggest oil and gas producer and is home to the majority of new gas projects that could consume 10 percent of Earth's remaining carbon budget, according to the research group Climate Action Tracker.

Getting both the U.S. and China on board with a loss and damage deal could be the key to success at these climate talks, said Preety Bhandari, senior adviser in the global climate program and the finance center at the World Resources Institute think tank.

"I do hope this proposal does not fall apart because that would mean the unraveling of this COP," she said.

The four-page draft cover text released Friday is a more consolidated version of a sprawling list of proposals the Egyptian COP27 presidency had published the day before. It hews closely to warming target language agreed at last year's climate conference in Glasgow and at a gathering of major economies in Bali this week, but doesn't include proposals - such as a call to phase out oil and gas as well as coal - that many had hoped would push the world forward in its efforts against climate change.

At a news conference Friday, Tuvalu finance minister Seve Paneniu presented a petition signed by roughly half a million people calling for a "Fossil Fuel Non-Proliferation Treaty" - an idea also endorsed by the Pacific Island nation of Vanuatu, the European Parliament, and 70 city and state governments.

The Intergovernmental Panel on Climate Change has said that the world cannot afford any new fossil fuel development if it is to prevent warming beyond 2.7 degrees Fahrenheit - a threshold that scientists say is necessary to avoid the most catastrophic effects of climate change.

"If we are to really be serious about keeping the 1.5 degree Celsius target alive," he said, a commitment to phase out all fossil fuels "must be in the cover decision by the end of today."

Negotiators also remain divided over the rules for a "mitigation work program" that was set up last year in Glasgow. Developed countries and small island states have advocated for the program to conduct sector-by-sector analyses of what's needed to curb emissions and produce binding decisions that can be used to hold countries accountable for fulfilling their climate promises. But developing nations have pushed back out of concern that the program will place additional burdens on countries that are still trying to secure a basic standard of living for their citizens.

Tellingly, the cover draft still contains no details on the issue that could make or break the conference - how to pay for it all: "{Placeholder funding arrangement responding to loss and damage}" is all it says.