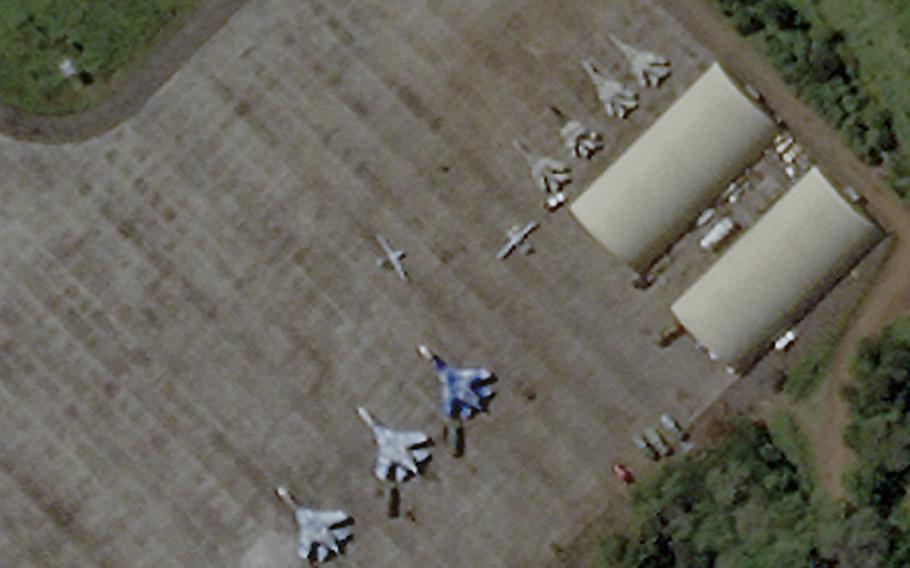 This satellite image provided by Planet Labs PBC shows the airport in Bahir Dar, the capital city of the Amhara Region of northern Ethiopia on Friday, Oct. 21, 2022. According to image analysis by armaments expert Wim Zwijnenburg of Dutch peace organization PAX, and and Justine Gadon of Stockholm International Peace Research Institute (SIPRI), the wingspan length, shape and other identifying details of the two smaller aircraft visible in the image are consistent with those of the Turkish-made Bayraktar TB2 drone. (Planet Labs PBC via AP)

NAIROBI, Kenya — Peace talks between warring sides on Ethiopia's Tigray conflict have been extended into this week, while the country's prime minister complained in comments broadcast Monday about "lots of intervention from left and right" in the process.

An official familiar with the arrangements for the talks confirmed that discussions continued in South Africa between Ethiopia's federal government and representatives from the northern Tigray region. The first formal peace talks began last week.

The African Union-led talks seek a cessation of hostilities in a war that the United States asserts has killed up to hundreds of thousands of people, an estimate made by some academics and health workers.

Prime Minister Abiy Ahmed, speaking to the China Global Television Network, said "we're working towards peace" and asserted that Ethiopians can solve matters by themselves. "Of course, if there are lots of intervention from left and right, it's very difficult," he added. He also said Ethiopian forces were in control of the Tigray towns of Shire, Axum and Adwa.

Neighboring Eritrea, whose forces are fighting alongside Ethiopian ones, is not a party to the peace talks, and it is not clear whether the deeply repressive country will respect any agreement reached. Witnesses have told the AP that Eritreans were killing civilians even after the talks began.

The fighting, which resumed in August after a monthslong lull, has been marked by guerrilla-style warfare by Tigray forces and drone strikes by Ethiopian ones that witnesses have said have killed civilians.

According to analysis of satellite imagery taken by Planet Labs PBC of Ethiopia's Bahir Dar airport south of the Tigray region on Oct. 21, by armaments expert Wim Zwijnenburg of the Dutch peace organization PAX and by the Stockholm International Peace Research Institute, the wingspan, length, shape and other identifying details of two smaller aircraft visible are consistent with those of the Turkish-made Bayraktar TB2 drone.

The United Nations-backed International Commission of Human Rights Experts on Ethiopia has found evidence of the government using drones in the conflict "in an arbitrary and indiscriminate manner," commission members told journalists last week.

The commissioners said they have not done a comprehensive analysis of where Ethiopia is obtaining the drones, but they said they had confirmed the drone used in a strike that killed people in a displacement camp early this year came from Turkey.

The commissioners also warned that "atrocity crimes are imminent" if there is no cessation of hostilities in a conflict with abuses documented on all sides.