CAIRO — Sudan's ruling military sacked a commander in the southern Blue Nile province after two days of fierce tribal clashes there last week killed at least 230 people and injured 250 others, the army announced Monday. The unrest added to the woes of a country mired in civil conflict and political chaos.

Fighting in Blue Nile, which borders Ethiopia and South Sudan, reignited earlier this month over a land dispute, pitting the Hausa tribe, with origins across West Africa, against the Berta people. The tensions escalated Wednesday and Thursday in the town of Wad el-Mahi on the border with Ethiopia.

The violence comes ahead of the first anniversary of Sudan's military coup that upended the nation's short-lived transition to democracy. It has also drawn criticism of the powerful-military, with a Sudanese pro-democracy group accusing the ruling generals of not protecting ethnic groups in the province.

Sudan's military spokesman, Col. Nabil Abdalla, said that Maj. Gen. Rabei Abdalla Adam was named as the commander for Blue Nile, replacing Maj. Gen. Ramzi Babaker who was removed from his post over the weekend.

The appointment was a part of the military's efforts to "address the regrettable security events," the spokesman said. The military also established a fact-finding mission to investigate the clashes, Abdalla said.

Fath Arrahman Bakheit, the head of the Health Ministry in Blue Nile, said Monday the death toll, including scores of women and children, had risen to at least 230. He said the casualty numbers became clearer late Saturday after the first humanitarian and medical convoy managed to reach Wad el-Mahi. Local authorities announced a nighttime curfew in the town, and deployed enforcements to the area to prevent further unrest.

In Damazin, the provincial capital of Blue Nile, protesters angered over the clashes stormed the headquarters of the local government and a military facility on Sunday, local media reported.

The U.N. Office for the Coordination of Humanitarian Affairs said protesters blocked the main highway linking Damazin to the capital of Khartoum. It said three more people were reportedly killed during the protests, which spawned skirmishes. OCHA said the violence has spread to other areas including the towns of Geisan and Kurmuk, where protesters burned down government buildings.

Pro-democracy groups have called for mass anti-coup demonstrations on Tuesday in Khartoum and elsewhere across Sudan to mark the coup anniversary. The military takeover removed a Western-backed government that ruled as part of a deal between the military and civilians following the removal of longtime autocrat Omar al-Bashir in a popular uprising in April 2019.

Internationally backed talks between Sudan's pro-democracy movement and the military made progress in recent weeks in efforts toward setting up a civilian-led government to be in charge through elections, which are to be held within 24 months, according to a draft by the Sudanese Bar Association, which has mediated the talks.

On Monday, more than a dozen countries, including the United States, Britain, France and other European nations, urged Sudanese leaders in a joint statement to "prioritize national interest over narrow political calculations to engage constructively in dialogue."

U.S. Secretary of State Antony Blinken said in a statement Monday on the anniversary of the coup that the U.S. honors the people of Sudan for demanding a democratic government.

"The Sudanese people have shown themselves as unshakeable in their aspiration for a civilian-led government that shows respect for their dignity and is responsive to their needs," he said. 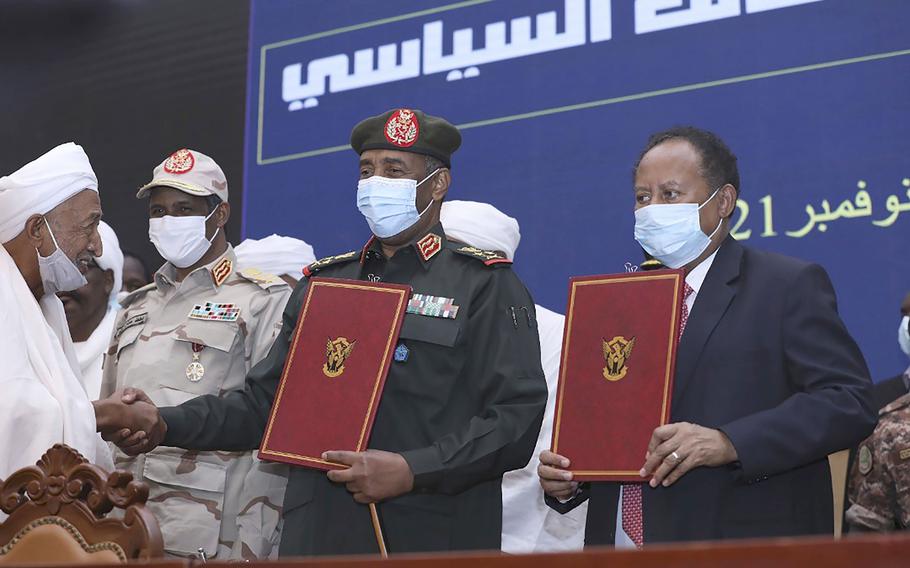