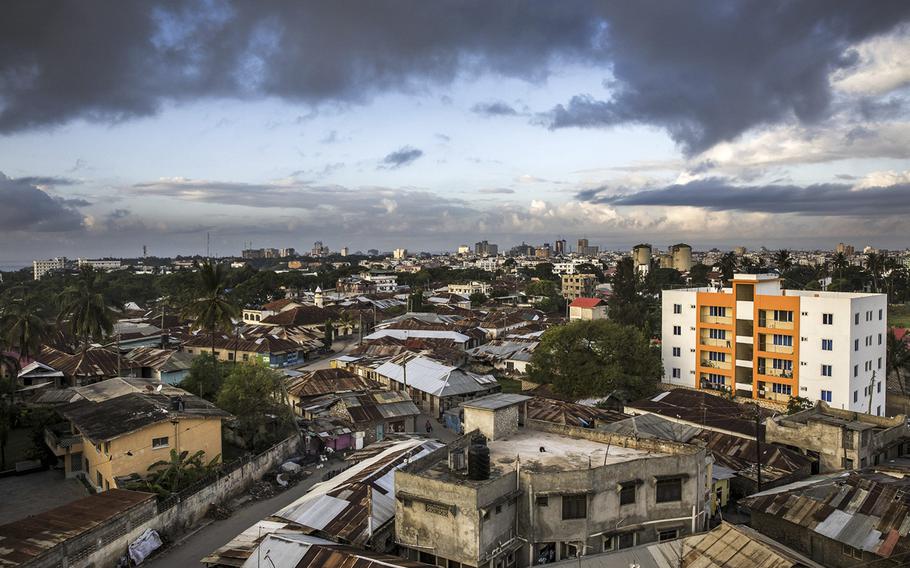 Residential buildings stand on the skyline in Mombasa, Kenya, in 2017. (Luis Tato/Bloomberg )

Servicing the Export-Import Bank of China loans, which mature in 15 to 20 years, is choking the economy, Murkomen told lawmakers Wednesday at a confirmation hearing in the capital, Nairobi.

"If we can manage to renegotiate to 50 years, then it will ease the burden" and enable the government to use money for other parts of the economy, he said. "We are choked by loans."

Kenya is at high risk of debt distress and reducing its vulnerability is a central goal of a 38-month International Monetary Fund-supported program announced earlier this year. The country's debt stood at 8.58 trillion shillings ($70.8 billion) in June, equivalent to 67.8 percent of gross domestic product, according to the National Treasury.

The rail line, part of China's Belt and Road Initiative, is Kenya's biggest infrastructure project since the country gained independence from Britain in 1963. It links Nairobi with the port of Mombasa, East Africa's largest harbor. Kenya Railways Corp. was scheduled to start operating the project in June, after taking over from Africa Star Railway Operation Co., a subsidiary of China Road and Bridge Corp., to reduce operating costs.

Murkomen said that the use of short-term capital to build long-term projects such as railways resulted in a funding mismatch. The railway has yet to break even, he said.

"It becomes impossible to be able to pay that loan from revenue that comes from the railways," he said. "Even in 50 years, it will never break even."

Many African countries watched debt restructuring talks between China and borrowers Angola and Zambia to gauge what may happen if they request similar treatment, according to Oyintarelado Moses, a data analyst at the Boston University's Global China Initiative.

Of the $696 billion owed by African nations by the end of 2020, 35% was to private creditors excluding those in China, and 12% by both private and public Chinese lenders, according to UK-based Debt Justice, which lobbies for poor countries' loans to be written off.