Ethiopia’s civil war is heating up once again 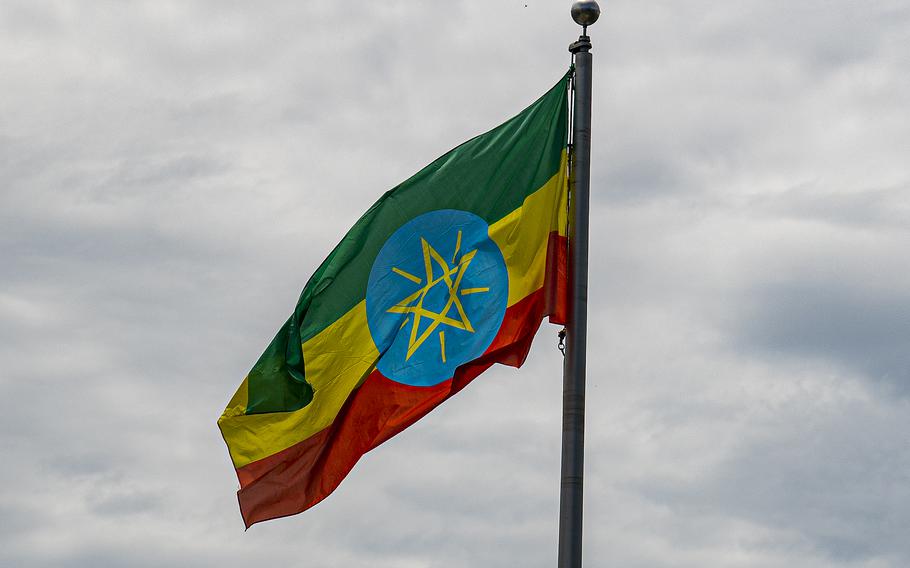 The Ethiopian flag flies above Ethiopia’s embassy in Washington, D.C., on July 6, 2022. ( Carlos Bongioanni/Stars and Stripes)

Hostilities in Ethiopia’s northern Tigray region escalated as air strikes and the mobilization of troops in towns on either side of the border with neighboring Eritrea forced tens of thousands more people to flee their homes.

The renewed hostilities after a five-month ceasefire threaten to hamper Ethiopia’s negotiations with the International Monetary Fund for a new loan and inflame regional tensions in the two-year-long conflict.

An air strike hit a town about 32 kilometers (20 miles) from the Eritrean border on Tuesday, killing at least six people and injuring 19, said two humanitarian officials with direct knowledge of the events who asked not to be identified because they’re not authorized to speak about the matter. The bomb was dropped by a fighter jet that came from the direction of Eritrea, they said.

The number of internally displaced people, some of whom have been uprooted for a second time in the nearly two-year conflict, has surpassed 210,000 in and around Shire, a town about 48 kilometers from the Eritrean border, the people said.

Tuesday’s air strike hit a busy residential area in the center of Adi Da’ero town at about 9:30 a.m. during Ethiopia’s Meskel holiday festival. Videos from the aftermath of the attack circulated on social media and corroborated by the humanitarian officials showed people searching through piles of steaming rubble looking for survivors as others looked on screaming.

The latest violence broke out about a month ago, after clashes erupted following a five-month humanitarian cease-fire between the government of Prime Minister Abiy Ahmed and forces loyal to the Tigray People’s Liberation Front. Satellite images released by the US-based Maxar Technologies Inc. this week showed a build-up of military forces, vehicles and artillery on both sides of Tigray’s northern border with Eritrea from earlier in the month.

Yields on Ethiopia’s $1 billion of Eurobonds due in 2024 have almost doubled this year, and were heading for a record high close of 43.67% on Thursday.

Eritrea’s involvement in the conflict has been criticized by the U.S. and ignored by the Ethiopian administration.

Eritrea is a longtime foe of the TPLF, which effectively ruled Ethiopia from 1991 until 2018. The two nations went to war in 1998 over a border dispute.

That conflict officially ended in 2018, when Abiy came to office and signed a peace deal with Eritrea, and won the Nobel Peace Prize as a result. Eritrean President Isaias Afwerki then backed Ethiopia when Abiy ordered an incursion into Tigray after TPLF forces attacked a federal army base.

The provision of humanitarian supplies from Afar, which borders on Tigray, has been suspended since Aug. 24, according to the United Nations. UN flights, which had been flying between the Ethiopian capital of Addis Ababa and Tigray’s regional capital, Mekelle, twice a week, haven’t operated since Aug. 26.

“The situation continues to create higher humanitarian needs and further stretch the limited response capacity of humanitarian partners striving to deliver assistance to people in need,” the UN said in a report last week.