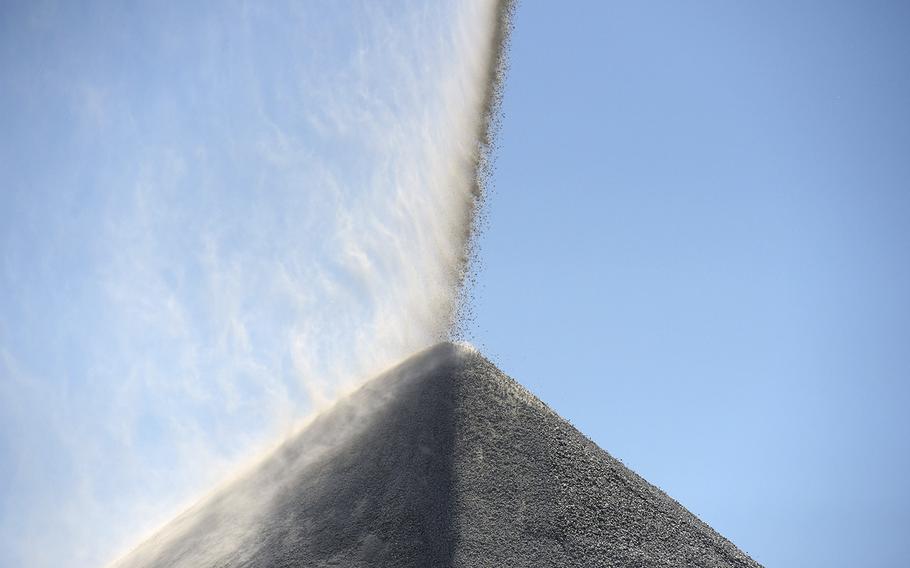 Lithium ore falls onto a stockpile at the Pilbara Minerals Pilgangoora project in Port Hedland, in Western Australia, on July 29, 2022. (Carla Gottgens/Bloomberg )

Zimbabwe's government approved a proposal by a group of Chinese investors to establish a $2.83 billion battery-metals park that will process metals including lithium, platinum and nickel, its latest plan to revive its moribund economy.

Hong Kong Eagle International Investment and Pacific Goal Investment intend to develop an integrated industrial park that will include lithium-salt and nickel-sulfate plants, and a nickel-chromium alloy smelter, Eagle International said in documents seen by Bloomberg and verified by Secretary for Mines Pfungwa Kunaka. An agreement on the plan was to be signed Friday, Deputy Mines Minister Polite Kambamura said.

"The goal of the New Energy Special Economic Zone Industrial Park is to develop an industrial value chain represented by new energy metals such as lithium and nickel, to increase the added value of the mineral products and form a new energy production base that embraced the world while based in Africa," the company said.

An accelerating shift to electric vehicles and soaring lithium prices have drawn investor interest to Zimbabwe. Chengxin Lithium Group and Sinomine Resource Group are setting up a joint venture to explore for the metal and Zhejiang Huayou Cobalt plans to invest $300 million to develop the Arcadia lithium mine in the northeast of the country.

Zimbabwe has announced several other major projects in the past that haven't come to fruition. President Emmerson Mnangagwa's government has announced more than $27 billion of planned investment since he came to power in November 2017, though the country has little to show for it. Platinum mine projects that were backed by Russian and Cypriot investors have shown little progress, as has a plan to revitalize a state-owned meat-processing company.

The economy has been roiled by two decades of political and economic instability after the seizure of land owned by White commercial farmers in 2000 triggered the imposition of sanctions on the country by the United States, the United Kingdom and the European Union, as well as number of smaller nations. Debts to multilateral lenders have gone unpaid, and there have been two bouts of hyperinflation.

The 30-to-50-square-kilometer (19-square-mile) battery-metals park is expected to be completed by the end of 2025, according to the documents. It would be situated about 48 kilometers (30 miles) northwest of the capital.

Among the projects planned at the park are two 300-megawatt power plants to be built at a cost of $250 million each to provide electricity to the various refineries - the first is expected to be completed by 2024 and the second a year later. Other proposed infrastructure includes a nickel-sulfate plant at a cost of $1 billion, a nickel-chromium alloy smelter at a cost of $500 million and a $450 million lithium-salt plant, the documents show.