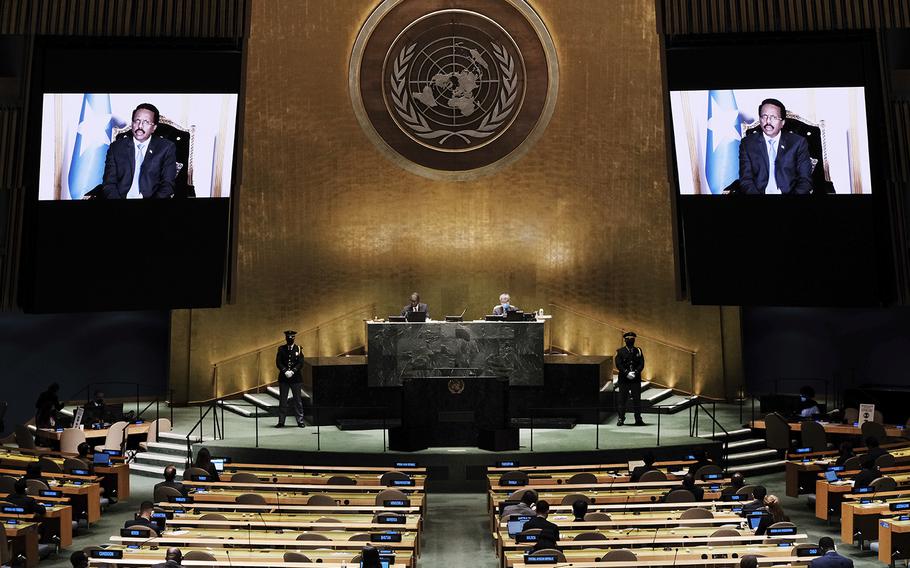 Former Somalian President Mohamed Abdullahi Mohamed Farmajo is seen on a video screen as he addresses the 76th Session of the UN General Assembly on Sept. 21, 2021, at U.N. headquarters. A U.N. humanitarian chief warned Monday, Sept. 5, 2022, that Somalia is in danger of facing severe famine. (Spencer Platt/Pool via AP)

Famine will hit parts of Somalia between October and December. That was the verdict of Martin Griffiths, the U.N. humanitarian chief, who spoke to reporters from Mogadishu, the war-torn, drought-ravaged Horn of Africa nation's capital. "I have been shocked to my core these past few days by the level of pain and suffering we see so many Somalis enduring," Griffiths said Monday. "Famine is at the door, and today we are receiving a final warning."

More than 7.1 million people - roughly half of Somalia's population - are in need of food assistance. One out of every five children in the country will face deadly forms of malnutrition by October should current conditions remain. Four failed rainy seasons have plunged the region into its worst drought in more than four decades, prompting roughly a million people in Somalia to leave their homes and trudge through the arid countryside in search for food and aid. Their woes were compounded by events far from their reach, with the Russian invasion of Ukraine causing a surge in global grain, fuel and fertilizer prices that have impacted some of the world's poorest countries.

Eyewitness accounts detail scenes of unending misery, as countless hungry children succumb to otherwise preventable diseases. "We are burying babies and watching with heartbreak as mothers cry because they don't know what to feed their children, now dying of hunger and thirst, and drought robs families of crops and livestock, their only source of income," Daud Jiran, Somalia country director for humanitarian organization Mercy Corps, said in an email.

For months, U.N. officials and international organizations have warned about mounting hunger in Somalia and other parts of Africa. But the declaration of famine itself is a specific and rare event usually invoked by the United Nations and national governments. A declared famine implies that the data shows more than 20 percent of households in the country have extreme food gaps, about a third of children experience acute malnutrition, and two people out of every 10,000 is dying every day from starvation, according to the Integrated Food Security Phase Classification.

Famine was last declared in Somalia in 2011 when more than a quarter million people died, half of them under the age of 5. Much has changed in the intervening years, but certain fundamental challenges remain, including the persistence of a violent Islamist insurgency by al-Shabab militants. They control a swath of the country and have made access to some areas hit by drought difficult for relief workers. Close to a million Somalis live in parts of the country dominated by al-Shabab. Experts believe the true extent of suffering in Somalia is far worse than the publicized data, with countless deaths going uncounted in rural areas.

A decade ago, critics warned that the famine declaration in Somalia came far too late, and that an earlier designation would have spurred the international community faster into action. The same may be true now.

"People are already dying," International Rescue Committee head David Miliband said in a statement. "During the last famine in Somalia in 2011, half of all deaths occurred before famine was declared. . . . The international community pledged to 'never again' allow famine in Somalia or wait so long to act, but it is repeating the same mistake this year."

The warning signs have been there for all to see. In April, the U.N.'s children agency said that 1.4 million kids under the age of 5 faced acute malnutrition and had already documented hundreds of deaths of children in malnutrition treatment centers. In May, at least 213,000 people in the central Bay region were deemed to be in "catastrophe," a term for starvation. Through the rest of the summer, U.N. agencies and aid organizations raised the alarm, cataloguing widespread hunger and decrying a lack of international support.

"The crisis is worse now than any time in my lifetime working in Somalia for the last 20 years, and it is because of the compounded effect of the war in Ukraine," said Mohamud Mohamed Hassan, Somalia country director for the charity Save the Children, to my colleague Sudarsan Raghavan in June. "Communities are at a breaking point."

Foreign aid has been slow to come. A $1.5 billion response plan for Somalia proposed by the United Nations was only 17 percent funded in April, and just two-thirds funded by August. Compare that to the tens of billions of dollars mustered by Western powers with minimal political discussion or fuss to support Ukraine's war effort against the Russian invasion.

Samantha Power, USAID administrator, said Tuesday that a famine can still be averted. "Today, a significant increase in humanitarian assistance can still help prevent mass starvation and deaths," she said in a statement. "But the window to prevent this famine projection from becoming a reality is closing quickly and the next several weeks are critical." Her agency has put into a motion a plan to feed at least 3.5 million people a month and committed at least $668 million in funding in this fiscal year alone.

Somalia sourced 90 percent of its wheat from Russia and Ukraine before the war. The first major shipment of Ukrainian grain since negotiations eased a Russian blockade reached East Africa last week. But the damage done to a region so dependent on these imports has been deep and lasting.

So, too, the toll of climate change. Ordinary Somalis - like ordinary Pakistanis who saw a third of their nation get flooded over the past week - have contributed little to the emissions that are warming the planet. But they are on the front lines of the catastrophic climatic events scientists believe will only grow more common in the years to come. In Somalia's case, experts predict more dry spells in the near future.

"The world is witnessing how climate change, conflict, rising food costs, and the knock-on impacts of COVID-19 are collapsing food systems and leading to preventable deaths," Jiran said in an email. "Continuing drought and starvation are the future if we do not protect the planet from a changing climate and help the communities hit first and hardest, like those in Somalia, mitigate and adapt."