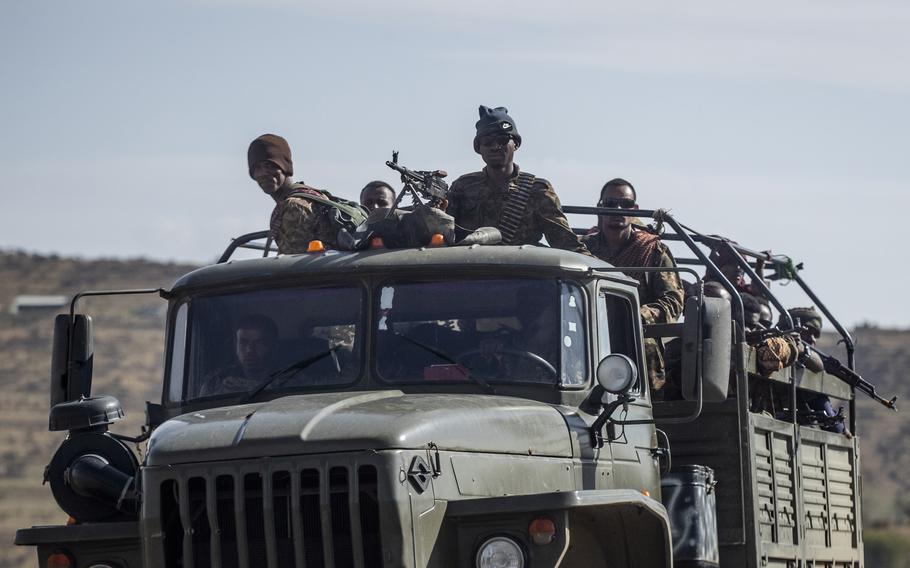 Ethiopian government soldiers ride in the back of a truck on a road near Agula, north of Mekele, in the Tigray region of northern Ethiopia on May 8, 2021. Authorities in Ethiopia’s northern Tigray region alleged Wednesday, Aug. 24, 2022 that Ethiopia’s military launched a “large-scale” offensive for the first time in a year, while Ethiopia’s military spokesman did not immediately respond to questions. (Ben Curtis/AP)

NAIROBI, Kenya — Ethiopia's military has launched a "large-scale" offensive for the first time in a year in the northern Tigray region, Tigray authorities alleged Wednesday, while the government countered that Tigray forces attacked first. It's a significant setback to mediation efforts as millions of people remain starved of food and other needs.

The conflict began in November 2020, killing thousands of people in Africa's second-most populous country. Now, as then, both sides have acted at a moment when the world was focused elsewhere — the U.S. presidential election in 2020 and the six-month mark of the Ukraine war Wednesday.

The conflict calmed in recent months amid slow-moving mediation efforts. But last week, the spokeswoman for Prime Minister Abiy Ahmed asserted that Tigray authorities were "refusing to accept peace talks," and this week, Ethiopia's military warned the public against reporting troop movements.

For their part, an Aug. 23 letter signed by Tigray leader Debretsion Gebremichael and shared with The Associated Press said Tigray leaders had "conducted two rounds of confidential face-to-face talks with senior military and civilian officials" — the first confirmation of direct talks. But it said "unacceptable conditions have been inserted into the peace process," and urged the international community to step in quickly.

All sides have committed abuses in the conflict. On Wednesday, the United Nations said Tigray forces "forcibly entered" a World Food Program warehouse in the regional capital, Mekele, and took 12 fuel tankers meant for the delivery of badly needed humanitarian aid.

The Tigray military command said Ethiopian forces, along with fighters from the neighboring Amhara region, "started a large-scale attack around 5:00 a.m. in the direction of Alamata, southern Tigray."

Ethiopia's government said Tigray forces attacked first and warned that if attacks continue, "the government will take measures to save the country ... and bring (Tigray forces) to the negotiating table whether it likes it or not."

Ethiopia's government has said it's ready for talks, but insists the African Union must lead mediation efforts. Tigray authorities criticize the continental body's efforts and urgently seek the resumption of telephone, banking and other services that have been largely cut off to the region of 6 million people since the war began.

Earlier this month, World Health Organization director-general Tedros Adhanom Ghebreyesus, an ethnic Tigrayan, described the crisis in Tigray as "the worst disaster on Earth" and wondered aloud if the reason global leaders have not responded was due to "the color of the skin of the people in Tigray."

Humanitarian aid began flowing to Tigray earlier this year, but the World Food Program last week said that with little fuel allowed, "this is yet to translate into increased humanitarian assistance." The U.N. agency said malnutrition has "skyrocketed," with 29% of children malnourished and 2.4 million people severely food insecure.

U.N. Secretary-General António Guterres said he was "deeply shocked" by the resumption of fighting and called for an immediate cease-fire and resumption of talks along with "the full guarantee of humanitarian access to people in need and the reestablishment of public services."

The humanitarian crisis extends to millions of people in the Amhara and Afar regions, while thousands of Tigrayans now live in refugee camps in Sudan.

The AU envoy, former Nigerian President Olesegun Obasanjo, didn't respond to questions. Like other envoys from the United States and European Union who have visited Tigray, he has said little about mediation efforts.

The fighting resume as the president of neighboring Kenya, who has tried to mediate with U.S. support, to Ethiopia's annoyance, prepares to leave office.

"This is one of the most important and brutal conflicts on Earth," U.S. Sen. Chris Coons, a member of the Senate Committee on Foreign Relations, told journalists after completing a five-country Africa visit during which he discussed Ethiopia with the presidents of Kenya and Rwanda.

"I actually had left Africa two days ago somewhat optimistic about the path forward for mediation, so (the renewed fighting) is very disheartening to hear," said Coons, who visited Ethiopia last year as an envoy of President Joe Biden. "I have been very disappointed that Prime Minister Abiy has not made more progress in meeting the commitments he made" including on humanitarian and media access, he said.

The renewed fighting is a "deafening warning to the key international and regional actors that they must immediately ensure peace talks actually occur," said analyst William Davison of the International Crisis Group. "They should accordingly instruct the belligerents to issue all of their demands when at the negotiating table, rather than making them preconditions for talks."

Edith M. Lederer at the United Nations contributed to this report.