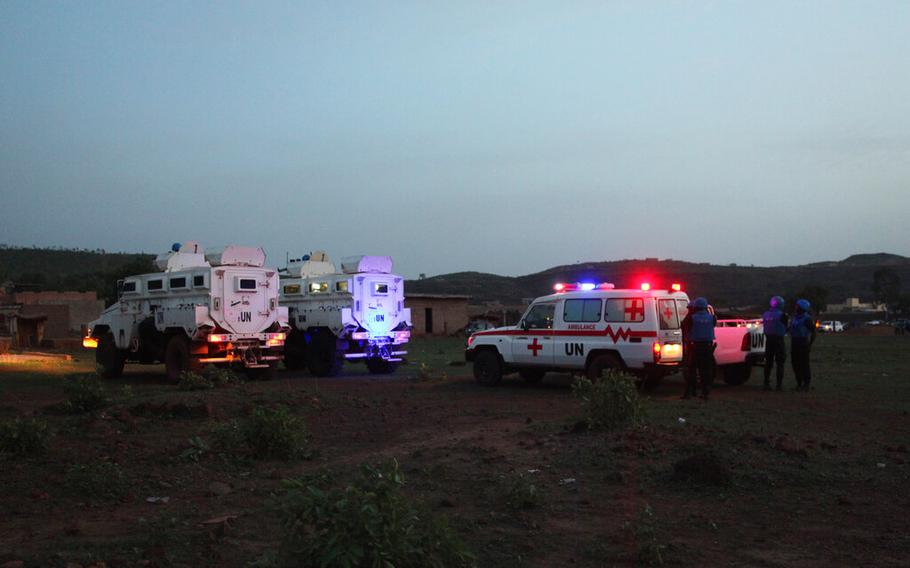 UN armored personnel vehicles are stationed with an ambulance outside a tourist resort near Bamako, Mali, June 18, 2017. (Baba Ahmed/AP)

RABAT, Morocco — Mali's government has given the United Nations mission in Mali spokesman 72 hours to leave the country following a standoff between the West African country and Ivory Coast over the detention of 49 soldiers who came to Mali to support a security group contracted by the U.N. mission.

Mali's Ministry of Foreign Affairs said that the Deputy Special Representative of the U.N. Secretary General in Mali, Daniela Kroslak, was told of the decision by Mali to "invite" U.N. mission spokesman Olivier Salgado to "leave the national territory within 72 hours," according to a foreign ministry statement.

"This measure follows the series of contentious and unacceptable publications by the person assigned to social networks declaring, without any proof, that Malian authorities were informed ahead of time of the arrival of 49 Ivorian military soldiers," it said.

Ivorian soldiers had arrived in Mali on July 10 as part of a support mission for a company contracted by the U.N. mission. Mali argues the soldiers were illegally in Mali. Ivory Coast said that Mali was informed. Mali has since suspended rotations for U.N. missions.