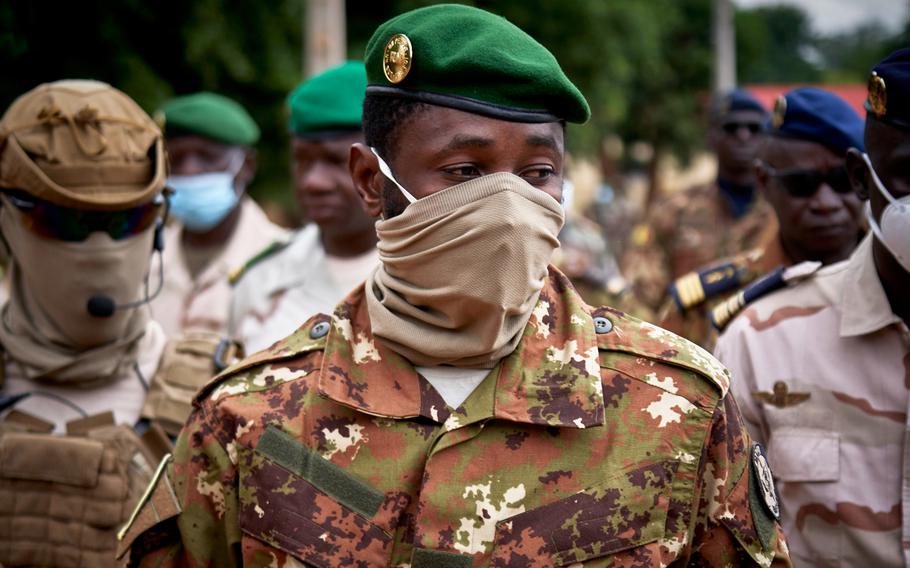 Col. Assimi Goita, president of the CNSP (National Committee for the Salvation of the People), arrives at the funeral of former Mali President General Moussa Traore in Bamako on Sept. 18, 2020. (MICHELE CATTANI/AFP)

(Tribune News Service) — Presidents of West Africa’s regional bloc agreed Sunday to lift economic and financial sanctions on Mali after the nation’s military leaders agreed to a return to democracy by 2024.

The Economic Community of West African States, or Ecowas, also said Burkina Faso has decided on a 24-month transition to civilian rule. The bloc urged Guinea to submit a timeline for a transition to democracy by the end of July, Jean-Claude Kassi Brou, president of the Ecowas Commission, told reporters in Ghana’s capital, Accra.

Mali’s presidential election should be held in March 2024 and Ecowas “demands the non-participation of the transitional authorities,” in the vote, a statement said. The country’s ruling junta had passed legislation that paved the way for its interim authorities to run in the next presidential vote.

Burkina Faso is now expected to hold a vote on July 1, 2024, Ecowas said. Both countries remain suspended from the regional body, Brou said.

Guinea, the world’s top bauxite producer, and its new mediator, Thomas Boni Yayi, former President of Benin, now have about four weeks to submit a new date for elections or face sanctions, he said.

West Africa has seen a surge in military takeovers, with army commanders ousting elected leaders in Mali, Guinea and Burkina Faso in the past year.

Ecowas and the West African Monetary Union placed stiff and damaging sanctions on Mali, Africa’s third-biggest gold producer, earlier this year after it defied international pressure to hold elections. The International Monetary Fund cited the sanctions as a factor in its decision to lower its forecast for that economy’s expansion to 5% this year from an initial projection of 5.5%.

Ecowas held off on implementing similar sanctions on Burkina Faso and Guinea to enable the two nations to submit new transition plans during the summit.

The bloc on Sunday also elected the president of Guinea-Bissau, Umaro Sissoco Embaló, as its new chairman and Gambian diplomat, Omar Alieu Touray, as president of the Ecowas Commission.