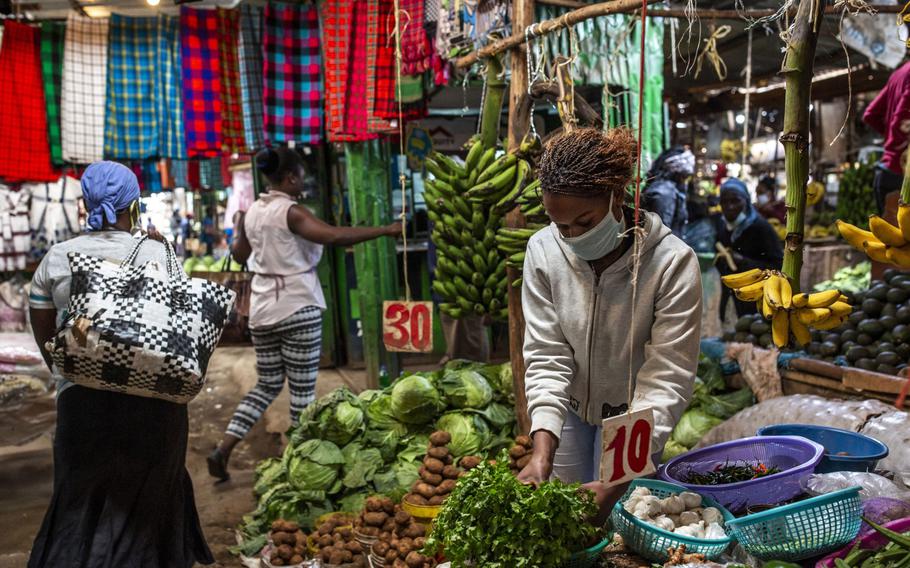 A vendor wearing a protective face mask arranges fresh produce on her vegetable stall at Toi market in Nairobi, Kenya, on May 26, 2020. (Patrick Meinhardt/Bloomberg)

Kenya’s Deputy President William Ruto dismissed comments by his boss that Russia’s invasion of Ukraine is partly to blame for higher living costs, vowing to boost farming if he wins the presidency in August.

Ruto pledged to invest at least 500 billion shillings ($4.2 billion) in agriculture and small businesses over five years. That investment would include providing animal feed and seeds to boost yields. Farming stood out in Ruto’s manifesto as a significant part of his so-called Bottom-Up economic model -- where he seeks to channel government resources to sectors that can create the most jobs.

The answer to addressing the “cost of living is increasing agricultural productivity, period. This whole story about Ukraine and all this is a lost cause,” Ruto said at a rally at the Kasarani Stadium in the capital, Nairobi.

The country with East Africa’s largest economy will hold a general election on Aug. 9 to vote for a new president, governors and lawmakers. Ruto’s main rival, former Prime Minister Raila Odinga, is slightly ahead in the most-recent opinion polls.

Ruto’s remarks on Russia’s invasion of Ukraine come weeks after President Uhuru Kenyatta blamed the rising cost of living on factors including those he said are out of his control like the war -- prices of everything from gasoline to fertilizer, corn and milk have surged. Kenyatta fell out with his deputy and is backing Odinga to replace him.

“If we had not withdrawn the fertilizer subsidy” and “stuck to the plan on food security,” Ruto said, “we wouldn’t be in the crisis we are in today.”

Ruto said his administration will ramp up the production of key commodities, including milk, edible oils and rice. To do this, he plans to provide capital at competitive rates to farmers. If voted in, he said his government will expand Kenya’s agricultural extension services.

“Our agricultural productivity has not matched our population growth,” Ruto said. “We are spending 360 billion shillings to import food and food items.”

Whoever wins the election will have the task of steering an economy projected to slow this year, a growing debt burden, inflation that’s breached the upper limit of the central bank’s target range and high unemployment. Odinga vowed to tackle the load of commercial loans under a plan that involves potentially restructuring public debt, a declaration that contributed to the price of the country’s eurobonds plunging this week.

Ruto also said that the country is “in a debt hole” and debt-servicing costs are the single largest expenditure item in the recurrent budget. “If you find yourself in a hole stop digging,” Ruto said without giving details on how he will address government liabilities.

Odinga leads Ruto 39% to 35% among likely voters, Nairobi-based pollster Tifa Research said in May, the first time the opposition leader edged ahead of the deputy president.

- The deputy president pledged to provide 50 billion shillings each year as credit to small businesses at competitive rates.

- Ruto promised to allocate half of his cabinet ministerial positions to women to promote gender parity across the government.

- His government will increase the supply of new housing to 250,000 units per year. He pledged to grow the number of mortgages to 1 million from 30,000 currently.

- He pledged to reform the health care system to deliver universal coverage.

- He will seek 200 billion shillings by securitization of a fuel levy, and spend it on completing roads under construction and upgrading others in rural and urban areas.

“This plan is rigorously appraised and financeable within the resources constraint that we face,” Ruto said.