Can Liberia’s capital keep the sea out without hurting the coastal economy? 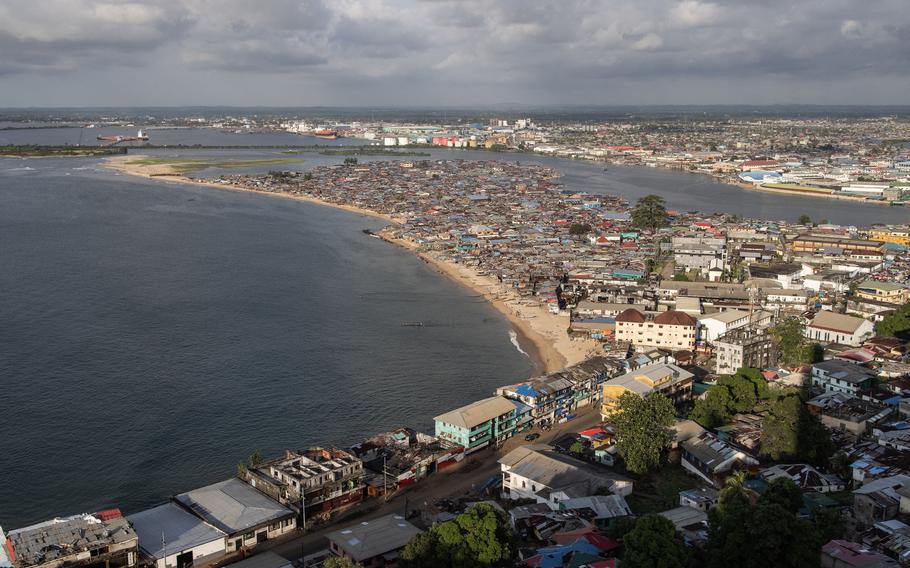 The famous West Point slum is pictured from the dilapidated Ducor hotel in Monrovia, Liberia, on Nov. 18, 2021. (John Wessels/AFP/Getty Images/TNS)

(Tribune News Service) — Musa Bamba moved to West Point, a bustling slum on a peninsula jutting out from Liberia’s capital Monrovia, two decades ago. The 48-year-old scrap metal trader bought a plot of land and built a 10-room house, back from the water’s edge, for his family in 2005.

But Bamba says over the years the sea has “eaten away” at West Point’s low-lying land, which is directly exposed to the brute force of the Atlantic Ocean all along its western flank. Now only a single room of that home remains. The rest has collapsed after being battered by waves.

The father of five now rents a tin shack further inland. “The sea was way back before,” says Bamba, who has turned the one remaining room of his old house into pay-for-use public showers. “But it has been running towards us, closer and closer, taking our land.”

West Point is being washed away. Entire soccer fields have been swallowed up by the water; coconut trees that once lined the shore have come down.

According to local officials, the district’s population has fallen from 85,000 less than a decade ago to just 50,000 today. Coastal erosion has eaten away almost 100 feet of shoreline over that time period and destroyed the homes of more than 670 families, they estimate, as well as putting at risk critical fishery businesses.

“There’s nowhere for us to shelter,” says Lawrence T. Wreh, a community leader and the revenue director for the West Point district. “The population has fled as a result of the erosion. Homes are being taken away every day. It’s a very serious problem.”

Liberia was ranked 171st out of 181 countries in the latest ND-GAIN Index, a measure of climate vulnerability. More than 70% of the country’s population lives in coastal areas and nine of its 15 counties suffer from coastal erosion. The West African nation, which has a GDP of $3.2 billion, is expected to incur up to $48 million in climate change-related damages by 2100.

Globally, funding to assist places like West Point is far eclipsed by the need. Now help for the area is belatedly on the way. In March 2021, the Green Climate Fund approved a $25.6 million, six-year effort known as the Monrovia Metropolitan Climate Resilience Project, which will be run by Liberia’s Environment Protection Agency in conjunction with the United Nations Development Program.

The project will fund the construction of coastal defense structures, to begin in 2023. It builds on previous UNDP efforts, including a 600-meter (nearly 2,000-foot) revetment installed in Buchanan, a city to the south of Monrovia, at a cost of $2.9 million.

More than hard infrastructure, the focus of this latest project is coastal management as well as climate-proofing residents’ livelihoods. Authorities say an attempt in 2017 to relocate residents from West Point to the Brewerville community, on the outskirts of Monrovia, failed because those who moved were unable to provide for themselves. “We have to take account of the impact on livelihoods. Otherwise it just won’t work,” says Tenesee Wilson, a coastal erosion expert at Liberia’s Environmental Protection Agency, noting that there will be two zones along the fortified coast to allow fishing boats to land.

People who work in West Point’s large artisanal fishing industry — the men who catch the fish and the women who dry and then sell the produce at markets — will be trained to use solar-powered eco stoves, a measure to stem the destruction of the nearby Mesurado Wetlands. Local residents often cut the wetland mangroves for firewood, but they’re important as a buffer from the sea and serve as a breeding ground for fish. West Point residents will also be provided with cold storage to reduce waste.

Moses Massah, energy and environment program specialist at the UNDP in Liberia, believes the social and economic aspects will set the GCF project apart. “This will be a state-of-the-art intervention,” he says. “This goes beyond just the deployment of a revetment. The project is taking a holistic approach.”

The stakes are high. In the Greater Monrovia area alone, expected sea-level rise of 16 cm (about 6 inches) by 2030 will put 675,000 people and 9,500 hectares (over 23,000 acres) of land at risk, according to the World Bank’s 2021 Climate Risk assessment. West Point, which sits south of a river inlet, is the city’s most threatened district, according to a UNDP study.

The construction in Monrovia of a port in 1948 and a dam in the 1960s have affected the water patterns and sediment movement along the coast, says John C. L. Mayson II, chief technical adviser of the MMCRP. Rising tides directly linked to climate change have over time increased the depth of a basin on the northern side of West Point, which has in turn drawn sediment from its beaches, accelerating erosion. Illegal mining of sand, a lucrative resource for construction, has also sped up the process.

Under the GCF-funded project, the rock revetment, sometimes referred to as a sea dyke, will be built upon a woven geofabric and then covered in a mix of pebbles, rocks and large boulders. The one in West Point is intended to hold the sea back for at least 40 years. Full modeling, vulnerability and feasibility studies are under way to determine the specifics.

Yet there are unknowns in planning for climate change. Philip Liu, an expert in coastal resilience, says that although revetments can be built to be higher than the worst-case scenario, it’s possible weather events will become more intense than expected. Mangroves and seagrass can be deployed to break up storm waves and slow down sediment, Liu adds. But there’s no guarantee that these “soft” defenses will be strong enough to protect large urban populations, either, and even then they take several years to grow.

“There is a lot of uncertainty around the future,” says Liu, who is not involved with the GCF project. “Designers need to think: ‘How flexible is the system?’”

In New Kru Town, another slum in Monrovia, a school auditorium regularly flooded until 2018, when a 4,000-foot revetment was built to protect the neighborhood. These days, the auditorium is back in full use with groups of students milling about. People drive their cars along a route that runs between the school and the water. The defense is holding out — but local leaders say it’s not sufficient and is already degrading.

“It’s good, but it’s not yet safe,” says Wle Wle Kofa, vice governor of New Kru Town. “We are appealing for this to be extended.”

Alison Raby, a professor of environmental fluid mechanics at Plymouth University in the U.K., says the GCF’s integrated approach to the West Point project is sensible. “This is a complex problem, and you need to have information from all different avenues,” she says. But in some cases, she adds, it doesn’t make sense to defend an area that will inevitably be submerged. Then the previously unthinkable must be considered: a “managed retreat” as land is taken by the sea.

“That depends on the value of the location, whether it has critical infrastructure, a large population and whether there’s capacity to relocate them elsewhere,” says Raby. “Those decisions need to be made with the communities involved.”

Whether West Point or any other of Monrovia’s communities should consider that option remains to be seen. The GCF, which has invested some $282 million in 11 projects related to coastal defense, has confidence in the Monrovia project. Spokesperson Scott Craig says the fund helps developing countries “with the needs that they themselves have identified, according to their own priorities.” Each project, Craig says, must pass “rigorous” technical assessments before receiving approval.

For now, the inhabitants of West Point are desperate for defenses to be built. With the rainy season — which brings higher water levels and storm surges — set to peak in May, they are braced for a devastating few months.

Nathaniel Flomo runs a shop about 60 feet from the water’s edge that is gradually being submerged in sediment carried in by waves. “Customers can barely get inside,” he says. The 55-year-old, whose three children have moved in with their grandmother in another district of the city, has already spent hundreds of dollars replacing the structure’s zinc panels. Now, his business is on a precipice.

“The sea is much closer. It’s bringing destruction and my shop is being buried in sand,” he says. “I am suffering.”