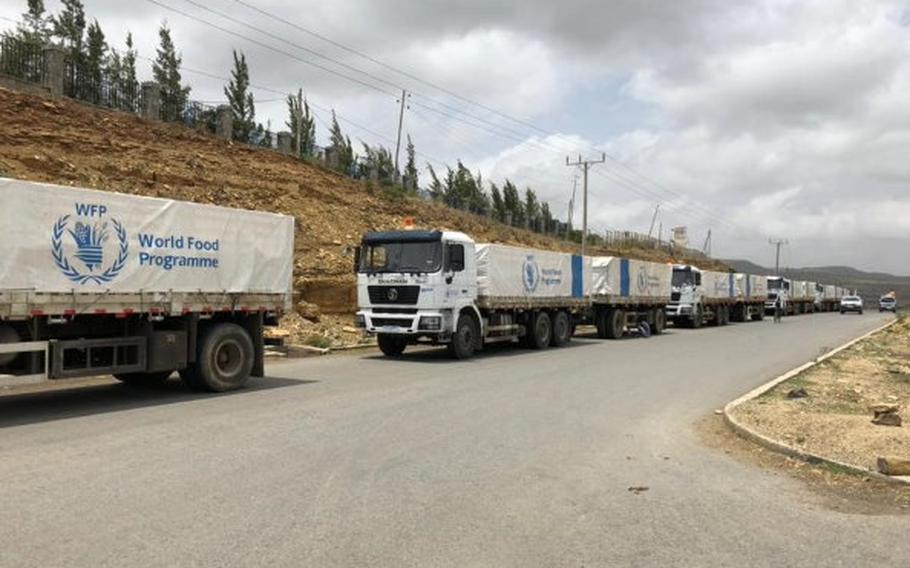 A United Nations World Food Program convoy of 50 trucks arrives in the Tigrayan capital of Mekelle in July 2021. The WFP announced on Friday, April 1, 2022, that a convoy of trucks with food reached the Tigray region for the first time since December. (WFP)

The delivery of more than 500 tons of food and nutritional supplies for hundreds of thousands of people on the edge of starvation came after the two sides in the conflict last week agreed a conditional truce in order to deliver assistance to the region. The tentative agreement is the closest the two sides have come to a cease-fire since the war began in November 2020.

The United Nations World Food Programme posted a video of the trucks making their journey toward Tigray's capital, Mekelle, and praised the government of the neighboring Afar region and local communities for granting the vehicles safe passage. Two UN officials confirmed by phone that the trucks had arrived in the city.

Ethiopia announced a unilateral cease-fire on March 24 and said it's making the "maximum effort" to facilitate the free flow of emergency assistance. Skirmishes along the main road from Semera in the Afar region to Mekelle initially impeded the delivery of aid.

The dissident Tigray People's Liberation Front said it would implement a "cessation of hostilities effective immediately" once it sees evidence that sufficient humanitarian aid is being delivered to the region.

"This is one good step in the right direction," Getachew Reda, a spokesman for the TPLF, said of the aid deliveries by text message on Friday. "The bottom line though isn't about how many trucks are allowed, but whether there is a system in place to ensure unfettered humanitarian access for the needy!"

Conflict erupted in Ethiopia in November 2020 when Prime Minister Abiy Ahmed ordered an incursion into Tigray after troops loyal to the region's authorities attacked a federal army base. That followed months of tension stemming from Abiy's sidelining of the TPLF, which had previously been the nation's preeminent power broker.

Aid agencies have warned of a growing humanitarian crisis, saying they have been unable to reach 200,000 displaced people in the Afdera district in Ethiopia's Afar region, where Tigray fighters have conducted a months-long offensive against regional forces allied to the government.