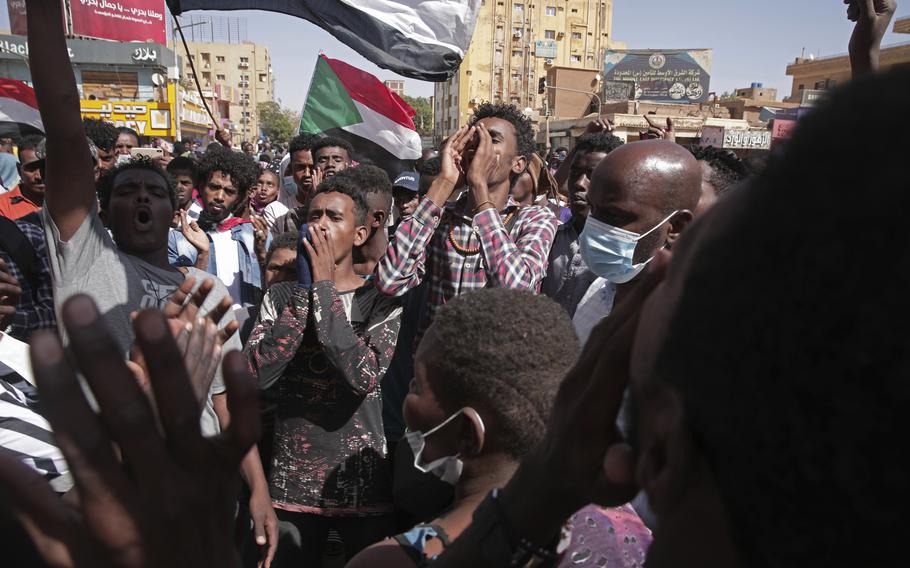 Protesters call for civilian rule and denounce the military administration, in Khartoum, Sudan, Monday, Feb. 21, 2022. Adama Dieng, the U.N.’s expert on human rights in Sudan, was in Khartoum on Monday to verify allegations of human rights violations after an October military coup plunged the country into turmoil and triggered nearly-daily street protests. (Marwan Ali/AP)

Sudan denied claims by Western diplomats that the Russian private-mercenary company Wagner Group is operating in the country.

The U.S. charge d’affaires, along with the British and Norwegian ambassadors to the North African nation, said in an article published in al-Sudani newspaper on Sunday that the Wagner Group is involved in “illicit activities” connected to gold mining and spreading disinformation online in Sudan.

The government “would like to deny altogether” the presence of the Wagner Group in the mining industry or that the mercenary group is providing training to the nation’s military, the Foreign Ministry said in a statement emailed from Khartoum, the capital, on Tuesday.

Wagner is controlled by Yevgeny Prigozhin, according to the U.S. and the European Union, though he denies it. Concord, a St. Petersburg company run by Prigozhin, didn’t immediately respond when Bloomberg sent a request for comment by email.

Sudan’s second-in-command, Mohamed Hamdan Dagalo, traveled to Russia last month to meet the foreign minister and defense officials. After his return, Dagalo said his government is open to Russia moving ahead with previously announced plans for a naval base on the Red Sea.