In Ethiopia, a video of civilians burned alive sparks anger 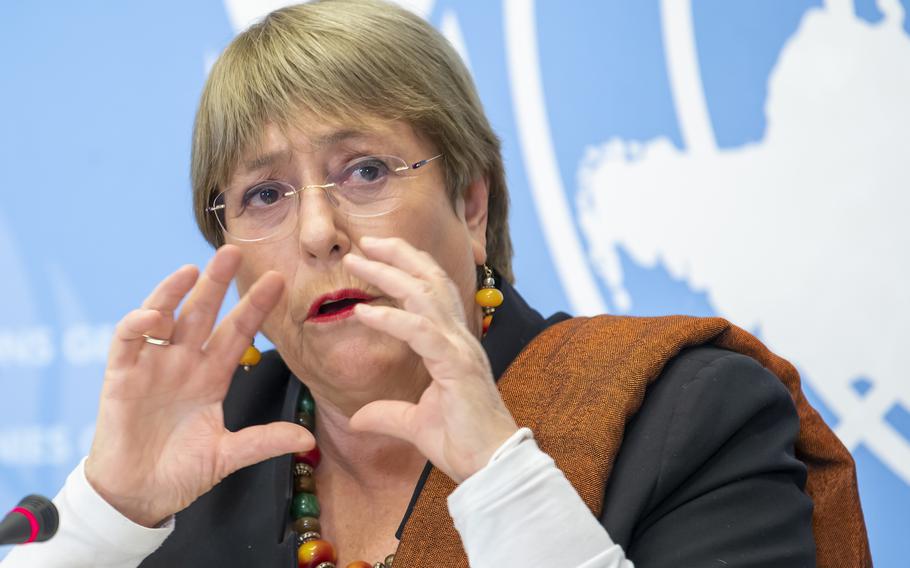 Michelle Bachelet, UN High Commissioner for Human Rights, speaks to the media about the Tigray region of Ethiopia during a press conference at the European headquarters of the United Nations in Geneva, Switzerland, Nov. 3, 2021. (Martial Trezzini/AP)

The video, shared widely on social media since Friday, has sparked anger among many in this country facing war in its northern region as well as ethnic strife in other parts.

The Ethiopian Government Communication Service confirmed that the incident — in which armed men drag and then burn three people in civilian clothing — took place in the Guba area of the northwestern Benishangul-Gumuz region.

"The video that circulated on social media depicts a very gruesome and inhumane act," it said. "Whatever their motive is, the government will prosecute those who committed the horrible crime."

Authorities didn't say when the incident happened. It also was not immediately clear if any suspects had been taken into custody.

The AP was not able to verify the authenticity of the video.

Tigray's leaders, who are fighting federal forces and their allies, charged that the burning victims were ethnic Tigrayans, describing the incident as "barbaric" in a statement Saturday. They accused "Amhara expansionists and their cronies" of carrying out atrocities against ethnic Tigrayans living in Benishangul-Gumuz.

Both sides in the Tigray conflict are accused of committing rights abuses.

The government-appointed Ethiopian Human Rights Commission on Friday accused Tigray forces of indiscriminately killing civilians and heavily shelling towns since August as they swept across the Amhara and Afar regions.

Prime Minister Abiy Ahmed's government has been struggling to contain ethnic-based attacks that spiraled out of control in recent months, especially after the Tigray war erupted in November 2020. Thousands of civilians are believed to have died in the conflict that persists in some parts of the northeastern Afar region.

Abiy took office in 2018 with sweeping political reforms that in part led to him being awarded the Nobel Peace Prize the following year.

He urged peace for all Ethiopians in an assembly of the ruling party that elected him as its leader on Saturday.