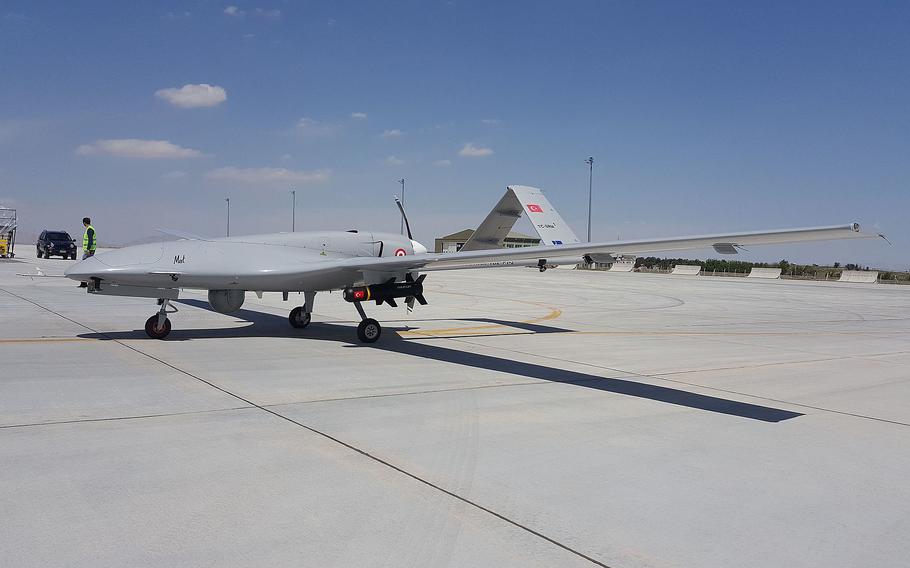 Bayraktar TB-2 loaded with MAM-L. Weapon remnants recovered from the site of the strike — in Dedebit, located in the northern Ethiopian region of Tigray — by aid workers showed internal components and screw configurations that matched images of Turkish-made MAM-L munitions released by the weapons manufacturer. (Bayhaluk/Wikipedia Commons)

Shortly after midnight one month ago, hundreds of hungry people made homeless by the war in Ethiopia — mostly women, children and elderly men — slept on a cramped floor in an empty school with a tin roof.

With a flash in the dark, the building was struck by a drone-delivered bomb, killing at least 59 people and gravely injuring dozens more, according to aid workers whose organizations worked at the camp for internally displaced people in Dedebit, located in the northern Ethiopian region of Tigray. They were adamant: The people killed and wounded were civilians fleeing the war, not combatants in it.

The Washington Post analyzed photos of shrapnel and satellite imagery and cross-referenced video of the aftermath to confirm that Turkish-made precision-guided munitions were used in the strike, which took place in the early hours of Jan. 7. The Ethiopian military is the only party in the conflict known to have access to armed drones.

The emergence of armed drones in Ethiopia reflects a proliferation of unmanned aircraft that has transformed conflicts around the world, from Libya to Ukraine, as weapons that were once the province of superpowers become widely available and employed to deadly purpose by governments and rebel groups. In Ethiopia, the government’s use of armed drones has turned the 16-month conflict against the Tigray People’s Liberation Front (TPLF) in its favor.

The use of a precision-guided weapon in the strike in Dedebit raises questions about the Ethiopian government’s targets, which internal documents at aid organizations say have hit not just this camp, but also other locations far from the battlefield, including a flour mill, a public bus, farms, hotels and busy markets.

Those documents, which were shared with The Washington Post, say more than 300 civilians have been killed by drone and airstrikes since September, including more than 100 since the start of this year. Those deaths represent a fraction of the thousands who are estimated to have died in the conflict and more than 4 million others, in Tigray and neighboring regions, who face a humanitarian crisis.

The Ethiopian government has not acknowledged the strike and did not respond to multiple requests for comment on how the target was chosen. A Turkish government spokesman declined to comment. The Turkish manufacturer of the drone’s munition did not respond to The Post’s queries about the use of their product in the conflict. An ongoing communications blackout and government restrictions on access have made assessing ground realities in Tigray exceptionally challenging.

Local aid workers and Tigrai Television, a local media outlet linked to the TPLF, filmed the aftermath of the strike. The Post verified the videos by locating the structures in the footage in satellite imagery of the camp and by comparing the clips to each other.

In the videos, bodies are lined up in rows near the targeted school, surrounded by a grieving crowd. Entire limbs are torn off, faces disfigured beyond recognition. At least five women and seven children are visible among the dead. A priest sprinkles holy water, and a man gently covers up a child’s body with cloth.

Weapon remnants recovered from the site of the strike by aid workers showed internal components and screw configurations that matched images of Turkish-made MAM-L munitions released by the weapons manufacturer. The MAM-L pairs exclusively with the Turkish-made TB-2 drone.

“On a lot of these new drone-dropped weapons, the bodies and internal electronics can appear similar, but each manufacturer uses different screw configurations to attach the wings to the fuselage of the munition,” said Brian Castner, a weapons investigator for Amnesty International. The MAM-Ls have a four-screw pattern, he said.

Other images of shrapnel, which reveal different components of the laser-guided munition’s wings, corroborated this analysis.

The nearly 50-pound weapon used in Dedebit can travel roughly nine miles from the time it is released until its impact. It is meant for targets such as tanks, light armored vehicles or personnel, according to the manufacturer’s website.

A comparison of high-resolution satellite imagery taken before and after the strike reveals a 4-by-3 meter hole in the roof of the primary school.

“The damage to the red roof and interior of the building looks consistent with a weapon of this size,” Castner told The Post. He cautioned that this did not necessarily mean the primary school had indeed been the intended target.

For much of the conflict, definitive open-source evidence showed the Ethiopian government had a small number of Chinese commercial drones that had been used by the country’s police, and a cadre of unarmed Israeli-made drones.

By late 2021, Ethiopia had dramatically expanded its fleet of drones. Turkey sold drones to Ethiopia as recently as October, Reuters reported, citing officials with knowledge of the agreement, well into a war marked by rounds of atrocities against civilians.

Open-source researchers confirmed the presence of Chinese-made Wing Loong drones in Ethiopia in November and Iranian-made drones in Ethiopia in August. Flight data from aircraft originating in the United Arab Emirates has led to speculation that the UAE — which has been a staunch government ally — provided Chinese-made Wing Loong drones and may have also provided modified, commercially made armed drones to the government.

Satellite imagery from November first revealed a Turkish-made TB-2 drone stationed at Harar Meda, a key Ethiopian military air base outside of Addis Ababa, according to Wim Zwijnenburg, a project leader for humanitarian disarmament at the Netherlands-based organization Pax, which focuses on protecting civilians from acts of war and ending violence globally.

Of those, only Bahir Dar, which serves as both a civilian and military airport, would have been within the 300-kilometer (roughly 186-mile) range where the Turkish TB-2 could deliver the munition and return to base.

A drone that matches the measurements and description of the Turkish TB-2 was spotted on the tarmac of Bahir Dar Airport, according to Zwijnenburg and The Post’s examination of available satellite imagery the day before the strike and again on Jan. 26.

“The military drones made a significant difference to the Ethiopian air force and their ability to push back the advances from the Tigray Defense Forces,” Zwijnenburg told The Post. “This is likely going to stay for a while.”

Remnants of the MAM-L munitions at other recent strikes in the Tigray region and elsewhere suggest the TB-2 continues to be used widely.

Relations between Ethiopia and Western governments have soured during the conflict, in part due to concerns over atrocities committed by government and government-aligned troops, as well as Ethiopia’s purchase of armed drones from not just Turkey but also Iran and China.

Reports over the past two months suggest U.S. officials are increasingly anxious about the role Turkish-made drones continue to play in the ongoing war. In September, the White House announced sanctions for people involved with the humanitarian and human rights crisis in Ethiopia. There has been no evidence that the administration has made this kind of move against Turkish companies or citizens.

“The United States has profound humanitarian concerns regarding the consequences of any military sales to Ethiopia,” a State Department spokesman, speaking on the condition of anonymity because of agency protocol, told The Post. “We have raised reports of drone use in Ethiopia with both the UAE and Turkey, and have made clear to all external parties engaged on all sides of the conflict that now is the time for all outside actors to press for negotiations and end the war.”

Both the Ethiopian government and its allies as well as the TPLF have accused each other of looting and destroying food stores and hospitals as battle lines have shifted over the course of the conflict. The World Health Organization conducted a survey that found only 3% of clinics in Tigray remained functional.

“It’s actually a wave of death. Far more in Tigray have died of birth complications, heart attacks, diabetes, effects of malnutrition, lack of medicines, or no fuel to move people toward care,” said Ilham Abdelhai, a senior World Health Organization emergency official with experience in Tigray. “Yes, the drone strike was horrific, but even before that, there is a daily reality of destitution and lack of basic health care. The supplies we may be able to bring in now are just a drop in the ocean.”

The Washington Post’s Kareem Fahim in Istanbul contributed to this report.