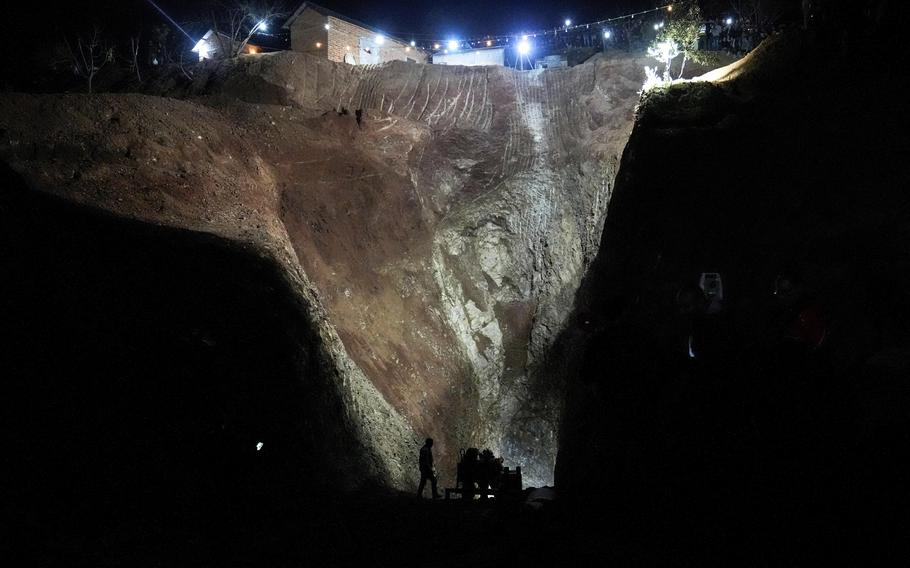 Civil defense workers and local authorities attempt to rescue a 5-year-old boy who fell into a hole in the northern village of Ighran in Morocco’s Chefchaouen province, Friday, Feb. 4, 2022. On Saturday, authorities announced that the boy’s dead body was recovered. (Mosa’ab Elshamy/AP)

Rescuers pulled a boy out of a 100-foot well in Morocco on Saturday after tunneling toward the 5-year-old in a four-day operation that transfixed the country and anxious observers across the world, but the royal palace said in a statement that the boy had died.

The emergency team's Saturday night extraction of the boy, identified in the king's statement as Rayan Oram, marked the end of a mission that involved teams of first responders and topographical engineers working round-the-clock with heavy equipment that included bulldozers and backhoes.

An ambulance took the child away as people prayed. The boy's condition remained unclear for a brief period before local and regional media began reporting the palace's statement that he had died.

The team had remained hopeful of getting Rayan out alive.

"It's hard to determine his condition . . . but there is great, great hope," team member Abdelhadi Tamarani said earlier Saturday.

For four days, the team worked to safely retrieve Rayan, who fell into a dry well and became trapped between its narrow walls, in the village of Ighran in Morocco's northern Chefchaouen province. The dramatic race to save him gripped Morocco and neighboring countries, with crowds gathering to join his parents and broadcasters live-streaming the efforts.

Rayan fell into the well Tuesday evening. The village contains numerous deep wells that provide irrigation for the cannabis crop that serves as the primary source of income for many in the remote region, the Associated Press reported.

The boy's parents heard his voice and spotted him down the well with the help of a flashlight, according to Morocco World News. Unable to descend into the well themselves, emergency workers deployed bulldozers and began digging.

"It's my well, and I was fixing it while Rayan was next to me," the boy's father told local outlet Le360 before the child was extracted.

Rayan's grandmother told Agence France-Presse that the boy was "very loved here in the village" and not just at home by his family.

On Friday, the team began digging a horizontal tunnel with the help of topographical engineers as hundreds of people looked on. They manually chipped away the final stretch, local media said. The motors of heavy machinery stopped, and silence descended on the scene.

The last few feet appeared to be the hardest, as the nerve-racking prospect of a wall collapsing or shaking soil threatened days of delicate work. Rescuers peered over the edge of a pit the team had dug to reach the boy, watching for their colleagues to bring him out.

Messages of support poured in through social media, where the hashtag #SaveRayan became a rallying cry. Regional media covered the rescue operation closely — including in neighboring Algeria, which has a tense relationship with Morocco.

Algeria and Morocco severed diplomatic ties in August. But Rayan's rescue mission provided a unifying moment for the feuding nations, especially as the news brought back memories of the 2018 death of 26-year-old Ayyash Mahjoubi, who was trapped in a well for six days in Algeria, according to Al Jazeera.

"Oh, Lord, show us the miracle of your kindness," Ahlam Mostghanmi, an Algerian novelist, wrote on Twitter, including a clip of an apparently breathing Rayan. She joined a chorus of Algerians — from soccer stars to ordinary residents — sending prayers and well-wishes. Social media platforms were inundated by messages conjoined by emoji of the two countries' flags. Some shared photos of themselves glued to their televisions, watching news updates of the operations.

"A big thank you to our Algerian brothers, you made me cry. . . . We hope that this is the way to reconcile the two countries," a Moroccan user commented on a Facebook stream of Rayan's rescue.

Rescuers used rope to send oxygen down to the child and a camera to monitor him. The camera showed the boy lying on his side facing a wall, making it hard to determine how he was faring as the team inched closer, Tamarani said.

Saturday evening, the sound of what appeared to be a small landslide triggered worried shouts from the crowd around the pit.

As night fell, cries in Arabic from onlookers of "God is great!" grew more numerous and plaintive. Cheers broke out sporadically as the mission seemed to be nearing its end. But the operation stretched into Saturday night with no news about the boy's condition. The temperature outside dropped to about 50 degrees Fahrenheit.

Chants, whistles and prayers picked up in the moments before the boy emerged from the well. Floodlights and the glare of rescue workers' reflective jackets pierced the darkness as the attention of the crowd — and the world — fixated on the mouth of the man-made tunnel on which a nation had pinned its hopes.

An ambulance, helicopter and medics were at the site to take the boy to a hospital. Rescuers formed a wall around the child as they pulled him from the pit and rushed him into a waiting ambulance, which quickly drove away around 9:30 p.m. local time.

Messages of condolence and support for Rayan's parents filled social media after news of the boy's death. The palace's statement conveyed the king's appreciation for the authorities, rescue workers and local residents who had endeavored to save the child and for the "strong solidarity and broad sympathy" shown to his family.

But the four-day rescue was one that rippled across the world — welding so many in hope and then unifying them in grief.

"Amid a pandemic and years of collective & individual loss, it was so beautiful to see people from around the world, even 1000s of miles away from Morocco, empathize, pray for & put every ounce of hope into 5 year old Rayan's safe recovery," Mai El-Sadanya, the legal and judicial director at The Tahrir Institute for Middle East Policy, said on Twitter. "Makes it that much more crushing."

Moroccan soccer player and Paris St. Germain star Achraf Hakimi was among the thousands of people posting about "le petit Rayan" — or little Rayan. Posting a montage of the boy's smiling face superimposed with the silhouette of rescuers and his country's flag, Hakimi shared a final message in Arabic about the rescue that had tugged at heartstrings far and wide.

"We belong to God and to him we shall return," Hakimi tweeted.