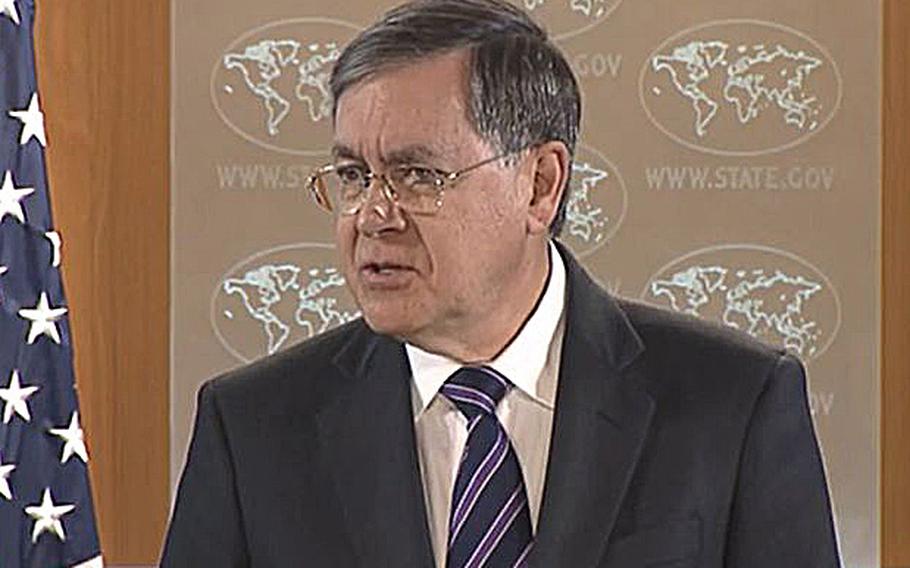 A video screen grab shows David Satterfield attending a briefing on Dec. 7, 2017, in Washington, D.C. According to reports on Wednesday, Jan. 19, 2022, Satterfield is in Sudan as the newly-appointed Horn of Africa special enjoy. (State Department)

A new U.S. envoy arrived in Sudan for crisis talks as expectations grow for a more robust response from Washington to the military's crackdown on opponents of October's coup that's left dozens of people dead.

The visit by Horn of Africa special envoy David Satterfield and Assistant Secretary of State for African Affairs Molly Phee comes as activity in much of the capital, Khartoum, has ground to a halt. Many businesses have closed and streets been barricaded as part of a civil disobedience campaign after security forces shot dead seven protesters on Monday, the latest in a series of confrontations with the pro-democracy movement.

At least 71 people have been killed and 2,200 injured since the Oct. 25 putsch that removed the civilian wing of Sudan's government. It shattered hopes of a smooth transition to democracy after three decades of dictatorship under Omar al-Bashir, who was ousted amid mass demonstrations in 2019.

The weeks of violence have been an embarrassment for Western countries that insisted the army had a constructive role to play after the coup. The U.S. delegation is expected to deliver a much sterner message to the military than during past visits, according to Western officials with knowledge of the matter. They requested anonymity as they weren't authorized to speak publicly.

The people didn't disclose what steps might be taken or threatened by the U.S., which imposed sweeping sanctions on the North African nation for two decades until 2017 and only lifted its designation as a state sponsor of terrorism little more than a year ago. Washington had been cultivating Sudan, a onetime pariah state that sits on a strategic spot on the Red Sea, as a new ally as civil war engulfed neighboring Ethiopia.

The U.S. and development agencies suspended hundreds of millions of dollars of aid and budgetary support after the coup, which has also hampered impoverished Sudan's eligibility for $50 billion of debt relief under an International Monetary Fund initiative. Authorities have said spending will be slashed in the 2022 budget, with cuts to food and fuel subsidies potentially sparking more unrest.

Satterfield, who was appointed this month, and Phee will press the army "to end violence and respect freedom of expression," State Department spokesperson Ned Price said Monday on Twitter. They visited Saudi Arabia earlier this week and will later travel to Ethiopia.

The army general who led the coup and heads Sudan's quasi-presidential sovereign council, Abdel Fattah al-Burhan, said Tuesday the government would form a committee to probe the most recent violence and publish the results by the end of the week.

"Through disproportionate use of force and continued detention of activists and journalists, the military authorities are demonstrating that they are not ready to find a negotiated and peaceful solution to the crisis," European Union Vice President Josep Borrell said Tuesday in a statement.