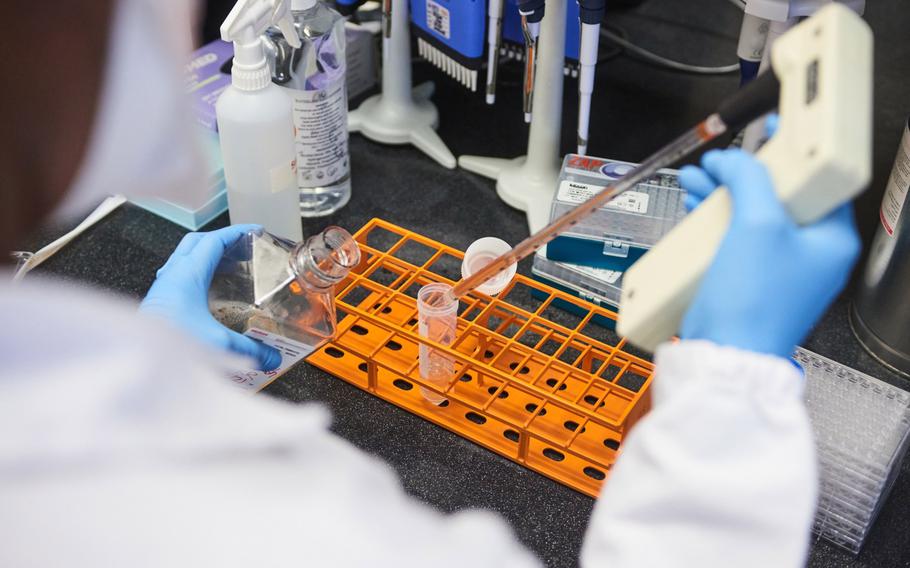 A technician uses a single channel pipette dropper to dispense material during Covid-19 antibody neutralization testing in a laboratory at the African Health Research Institute in Durban, South Africa, on Dec. 15, 2021. (Waldo Swiegers/Bloomberg )

Booster shots with messenger RNA vaccines such as those made by Pfizer and BioNTech failed to block omicron in a study of some of the first documented breakthrough cases caused by the highly contagious variant.

Seven German visitors to Cape Town experienced symptomatic Covid-19 infections between late November and early December despite being boosted, the researchers, whose investigation was authorized by the University of Cape Town and Stellenbosch University, said in findings published Tuesday in The Lancet. All the cases were mild or moderate, providing support for the extra shots' ability to fend off severe disease, death and hospitalizations.

Still, the findings demonstrate omicron's ability to evade immunity generated by even the most powerful Covid-19 vaccine boosters. That underscores the need to continue fighting the pandemic with measures besides vaccination, such as social distancing and masking, the authors said.

The shots appear to generate protection against omicron with other parts of the immune system in addition to antibodies, such as T-cells, and so far hospital and mortality data have been less severe than with the delta variant that dominated earlier.

The rapid global spread of omicron, first identified in Botswana and South Africa in late November, has spurred the U.K., the U.S., South Africa and other countries to step up or introduce booster programs. However, the latest research shows the limits of such plans.

Vaccines made with new mRNA technology have come to the fore during the Covid-19 pandemic. The shots instruct cells to make highly specific antibodies that block the coronavirus spike, a protein that allows it to enter cells. More traditional inoculations use inactivated or dead viruses to stimulate a response from immune systems.

Preliminary data from an Israeli trial involving 154 health workers -- released Monday, just two weeks after that study began -- showed that a fourth dose of Pfizer's shot didn't prevent infection with omicron. Still, those in the trial had mild symptoms or none at all.

Data from the U.K. have also shown a significant rise in protection against symptomatic infection and hospitalizations after a booster shot but suggest there may be a need for a fourth shot for those over 65, according to a report by Bloomberg Intelligence.

In the Cape Town study, four of of the Germans were training at local hospitals, three were on vacation, and all were between the ages of 25 and 39. Five were female, two were male, and none were obese.

Five had received three doses of the Pfizer-BioNTech vaccine, and one received Moderna Inc.'s shot -- also made with mRNA technology -- followed by a Pfizer booster. Another received one dose of AstraZeneca Plc's viral vector vaccine followed by two shots of Pfizer's. None reported a prior Covid-19 infection. Five of the subjects received their booster dose in late October or early November.

"The presence of this group from Germany presented a unique opportunity to study omicron breakthrough infections in individuals with mRNA vaccine boosters," the researchers said.

All of the subjects reported the onset of respiratory symptoms between Nov. 30 and Dec. 2, and ultimately experienced mild or moderate disease, they said.

Strong responses from T-cells were detected in the subjects, the researchers said. "The mild to moderate course of illness suggests that full vaccination followed by a booster dose still provides good protection against severe disease caused by omicron," they said.

Better vaccines will ultimately be needed to stop symptomatic infections with omicron, they said.