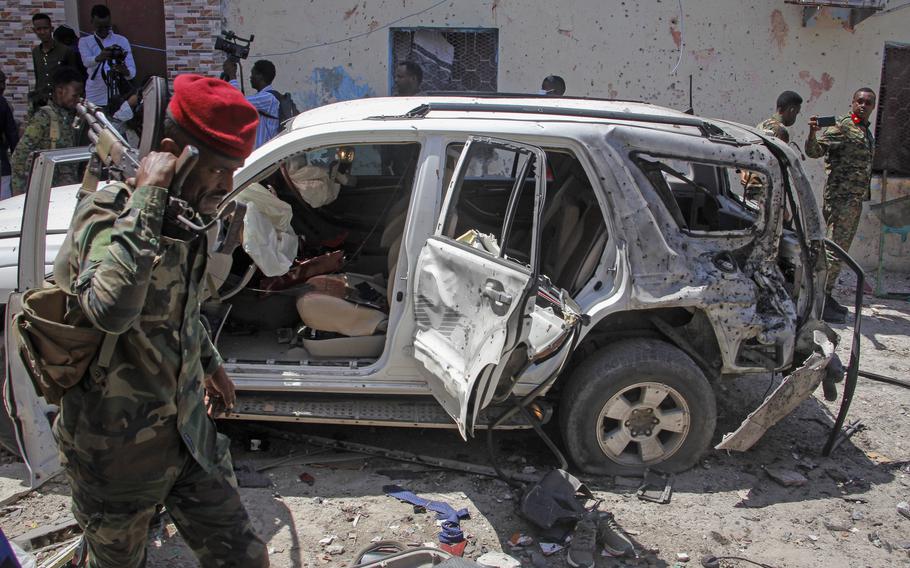 Security forces and others observe the remains of the vehicle in which Somalia’s government spokesperson Mohamed Ibrahim Moalimuu was wounded in a suicide bombing in Mogadishu, Somalia on Sunday, Jan. 16, 2022. (Farah Abdi Warsameh/AP)

MOGADISHU, Somalia — Somalia's government spokesperson was wounded Sunday in a suicide bombing that the al-Shabab extremist group has claimed responsibility for.

Mohamed Ibrahim Moalimuu appeared to be the sole target in the attack near his residence by a busy intersection in the capital, Mogadishu. A statement from the prime minister's office called Moaliimuu's wounds non-life-threatening.

It has been widely expected that such attacks would increase as tensions rise in Somalia over a national election that has been delayed for almost a year.

"Such attacks are purely politically motivated actions," said Mohamed Abdulaziz Omar, a local civil society activist, adding that it also occurred in past elections in the Horn of Africa nation.

Moalimuu, a former BBC journalist, also survived an attack in August 2020 after being wounded in a siege that killed 15 people at a beachside hotel in the capital. He was secretary-general of the Federation of Somali Journalists at the time. The al-Qaida-linked al-Shabab extremist group, which controls parts of Somalia, also claimed responsibility for that attack.