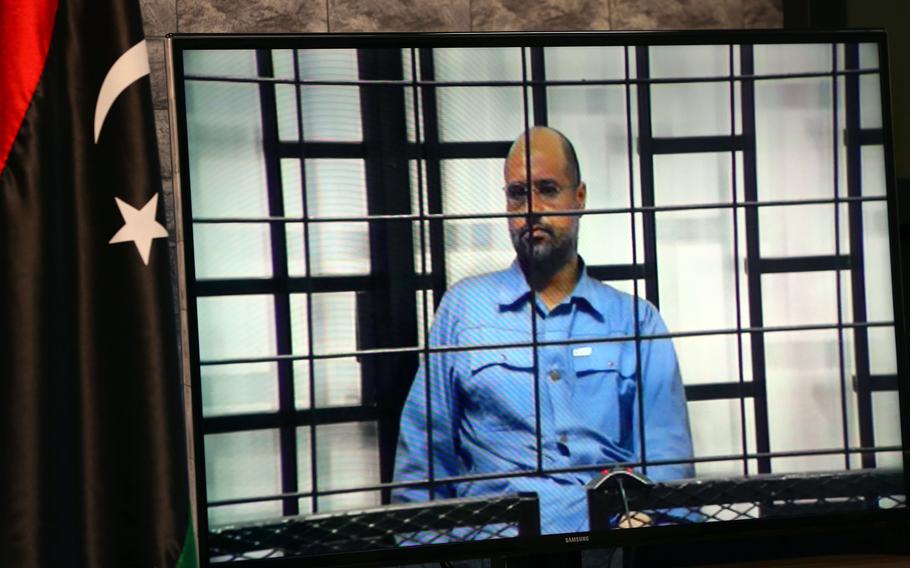 A screen inside a room in Tripoli on June 22, 2014, shows Seif al-Islam Gadhafi, the son of slain Libyan dictator Moamer Gadhafi, taking questions from a panel of judges as the interview was broadcasted live from Zintan, Libya. (Mahmud Turkia/AFP via Getty Images/TNS))

Efforts to win power in Libya by Seif al-Islam Gadhafi, the son of the country's late ousted dictator Moammar Gadhafi, won't succeed, according to the man who's been at the center of Kremlin-backed efforts to support him.

Maxim Shugaley acts as a political consultant for Yevgeny Prigozhin, a Russian tycoon close to President Vladimir Putin. He spent 18 months in a Libyan jail accused by the government of plotting to interfere in Libya's presidential elections in Gadhafi's favor. The Kremlin pushed for his release.

Now, Shugaley, 55, says he's gloomy about Gadhafi's prospects of becoming president. "No, he won't be," Shugaley said in an interview in Moscow, blaming the U.S. for thwarting Gadhafi's leadership ambitions, without offering evidence.

"He's an unacceptable figure for the United States — there is a political order against him," he said. "This would be a unique event in the world — 10 years on and the Gadhafi family stages a comeback. Just from a psychological point of view, it's a big blow."

The younger Gadhafi has little prospect of success because "for a lot of Libyans he represents a step back to the old regime," said Elena Suponina, a Moscow-based Middle East expert. "There are many people in Moscow who see this situation and in advance want to blame the potential failure of Seif al-Islam purely on the West," she said.

Rich in oil and gas reserves, Libya has drawn global and regional powers vying for influence in a civil war that's raged intermittently since Gadhafi's father was toppled and killed in a 2011 uprising. Putin has repeatedly railed against the West's role in the overthrow through NATO airstrikes.

The U.S. and its allies have accused Moscow, which lost billions of dollars in Gadhafi-era contracts, of trying to sabotage their efforts to shore up provisional United Nations-backed authorities.

Shugaley warned of the risk of renewed conflict if Gadhafi isn't allowed to run or his supporters believe he lost the election unfairly. "This is a delayed time bomb," he said.

An official role for Seif Gadhafi would "present a challenge for any Libyan government and the return of Libya to the international community," U.S. State Department spokesman Sam Werberg said Nov. 15. "He is wanted by the International Criminal Court for crimes against humanity and is subject to sanctions from the United States and the United Nations."

The landmark vote originally set for Dec. 24 has been plunged into uncertainty after Libya's election body called for a postponement. Authorities now propose holding it on Jan. 24.

Electoral officials recently denied Shugaley permission to return to Libya as a vote observer a year after he was released from prison to Russia before trial. Libyan prosecutors accused him of illegally providing political consulting to Gadhafi on his potential presidential bid, Bloomberg reported in 2020. Shugaley denied the charges, saying he was just doing research.

Shugaley said he met three times with Seif Gadhafi, 49, who only reemerged in mid-2021 after years of imprisonment and seclusion amid the war crimes charges.

Prigozhin, who's known as "Putin's Chef" for his Kremlin catering contracts, is under U.S. sanctions for alleged meddling in the 2016 U.S. presidential elections. His Wagner private paramilitary company was sanctioned Dec. 13 by the European Union for abuses including "torture and extrajudicial, summary or arbitrary executions."

Prigozhin denies he controls Wagner but the U.S. and EU reject that.

The group has deployed fighters to Libya, Syria, Venezuela and the Central African Republic, all places where Russia is striving for geopolitical influence against the West. Moscow denies any links to the mercenaries.

While Shugaley says he's not involved in Wagner, the think tank he heads, the Foundation for the Protection of National Values, is sponsored by Prigozhin. And Shugaley's willingness to discuss his activities in places ranging from Africa to Afghanistan marks a departure from a previous policy by Prigozhin and his lieutenants of keeping a low profile.

"For Prigozhin, his status as a defender of national interests is hugely important," said Tatiana Stanovaya, founder of the Russian political consulting firm R.Politik. "He wants to demonstrate this to Putin."

The U.S. sanctioned Shugaley's foundation in April for allegedly "supporting Prigozhin's global influence operations." After his release from prison in December 2020, Shugaley received 18 million rubles (about $245,000) from Prigozhin, as "material support" for the time he spent in jail, the tycoon's company said.

Libya's been a major focus for the Kremlin in recent years, with Russia hosting peace talks and the Defense Ministry publicly embracing a powerful warlord. Moscow has often found itself at odds with the U.S. and its European allies there, as well as regional players like Turkey, Egypt and the UAE, which all have sought influence in Libya.