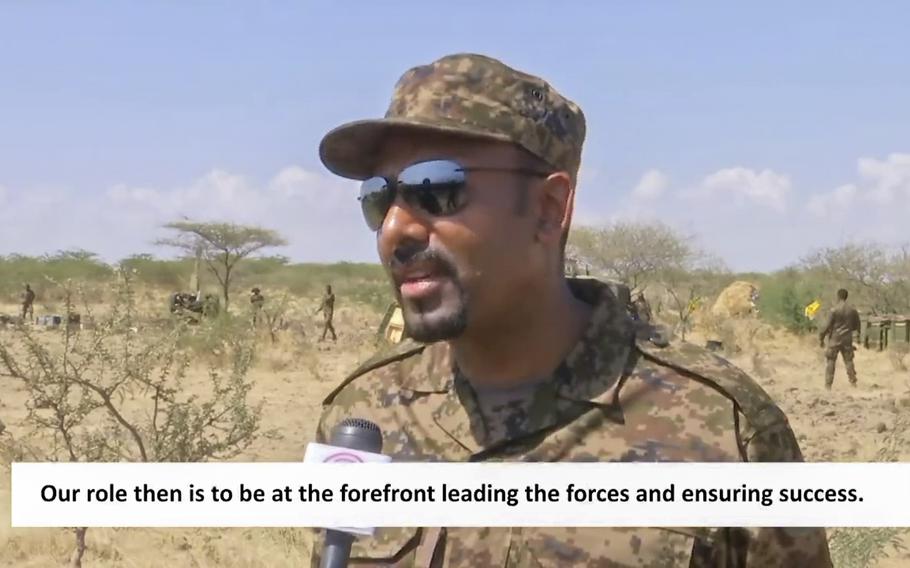 In this image made from undated subtitled video released by the prime minister of Ethiopia, Abiy Ahmed is seen dressed in military uniform speaking to a television camera at an unidentified location in Ethiopia. A state-affiliated broadcaster and the prime minister’s Twitter account on Friday, Nov. 26, 2021 showed video of Abiy purportedly on the battlefront of the country’s yearlong war against Tigray forces, four days after he announced he would direct the army from there. (Prime Minister of Ethiopia via AP)

Ethiopia’s government said its forces have recaptured a swathe of territory in the north of the country in a major counter-offensive against fighters loyal to the dissident Tigray province and have gained the upper hand in a year-long civil war.

Fighting has engulfed Africa’s second-most populous nation since Prime Minister Abiy Ahmed ordered an incursion into Tigray in retaliation for an attack on a federal army base. The conflict, which shows no signs of letting up, has hammered investor confidence in what was one of the world’s fastest-growing economies and sparked a sell-off in the nation’s bonds.

After initially being pushed out of the Tigrayan capital of Mekelle, the region’s ruling Tigray People’s Liberation Front struck back and its troops retook the city, most of the province and parts of the neighboring Amhara and Afar regions. That raised fears they could sever key trade routes or even stage a strike against the capital of Addis Ababa.

“The Ethiopian Defence Forces have launched a counter-offensive on the terrorist organization and the prime minister is now leading this from the front,” Billene Seyoum, Abiy’s spokeswoman, told reporters in the capital on Tuesday. “In the past few days alone, great strides have been made in forcing the TPLF to relinquish their occupation of key areas” and the threat that they could choke off the country has been averted, she said.

The government’s claims couldn’t be independently verified, and it was unclear whether a major turning point had been reached in the fighting. There was no immediate response from Tigray officials, who have previously said they were winning and their forces had advanced to within 220 kilometers (137 miles) of the capital.

Thousands of people have died in the conflict and hundreds of thousands of others have been displaced. Humanitarian agencies say more than 1 million people are in need of aid.

Billene accused the mainstream media of spreading a “false narrative” that exaggerated the extent of the war, “ignoring the fact there is no more fighting in Tigray and peddling libelous stories of ethnic cleansing and genocide by the government.”

The U.S., U.K., France and other Western nations have urged their citizens to leave Ethiopia, and the United Nations has evacuated most of its staff.

The European Union has meanwhile warned that there’s a risk of Ethiopia disintegrating completely unless the two warring sides agree to a cease-fire. African Union envoy Olusegun Obasanjo, a former president of Nigeria, is spearheading efforts to broker a truce.