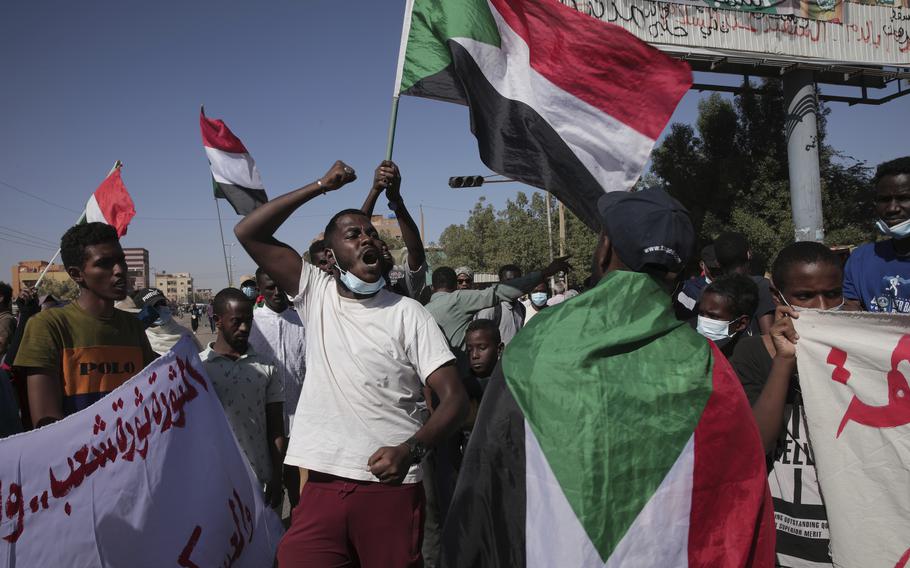 Thousands of protesters take to the streets to renew their demand for a civilian government in the Sudanese capital Khartoum, Thursday, Nov. 25, 2021. (Marwan Ali/AP)

At least 20 Sudan soldiers were killed in clashes with Ethiopian militias near a disputed border, a local official said, deepening a feud that risks turning into all-out conflict between the Horn of Africa’s most populous nations.

Sudanese forces crossed the Atbara river in the al-Fashqa area on Saturday in response to shelling and fell into an ambush, according to Alrasheed Ali, a member of the border commission of Sudan’s southeastern Gadaref state. Sudanese forces are now massed on the riverbank “and the situation is very tense,” he said Sunday by phone.

Ali didn’t comment on Ethiopian fatalities. A statement from Sudan’s army late Saturday said it had inflicted “heavy losses of life” on Ethiopian troops and militias who attacked them, while noting an unspecified number of deaths on its own side.

Ethiopian officials in the regional and federal governments didn’t respond to requests for comment.

The weekend’s fighting is the latest in a more than yearlong series of clashes in al-Fashqa, a patch of cotton- and sorghum-producing land straddling Sudan and Ethiopia that some fear is could become a powder keg in a growing dispute. The two countries are already at odds over Ethiopia’s unilateral plan to fill and operate a giant hydroelectric dam on the Nile River’s main tributary.

Both are also mired in internal turmoil. Ethiopia’s government is fighting a year-old war against Tigray rebels in which thousands of people have died and many more have fled their homes. Sudan last month saw a coup that toppled the civilian wing of a power-sharing government meant to lead the country to democratic elections. The military reinstated the prime minister after an international outcry.