US pledges to revamp neglected relationship with Africa 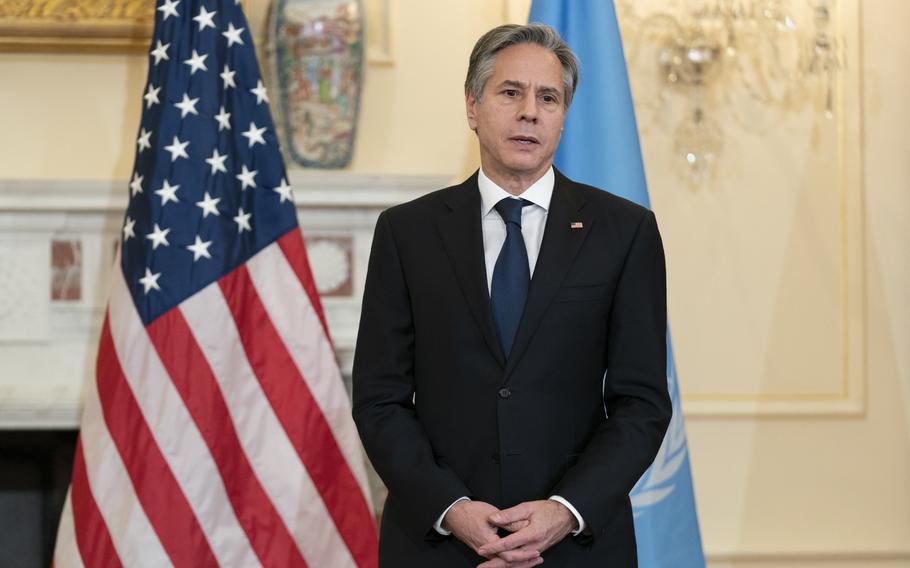 Secretary of State Antony Blinken speaks in the Benjamin Franklin State Dining Room during a meeting with International Organization on Migration Director General Antonio Vitorino, at the State Department, Monday, Nov. 15, 2021, in Washington. The Biden administration’s competition with China for influence hasn’t gotten off to a great start in Africa. (Manuel Balce Ceneta/AP)

President Joe Biden’s top envoy signaled the U.S.’s intent to revitalize its long-neglected relations with Africa, where it has steadily been losing influence to China and other global powers.

“Too many times, the countries of Africa have been treated as junior partners -- or worse -- rather than equal ones,” Secretary of State Antony Blinken said in a speech Friday in Abuja, Nigeria’s capital. “We want to make your partnerships with us even stronger.”

Africa has always been near the bottom of the U.S. foreign-relations priority list, with the world’s poorest continent accounting for less than 2% of its total two-way trade. Relations reached a low ebb during President Donald Trump’s tenure, during which he made disparaging remarks about African countries and high-level diplomatic engagements were few and far between.

Blinken is the highest-ranking official from the Biden administration to visit Africa. He spent a day in Kenya prior to visiting Nigeria and plans to stop in Senegal before returning home.

U.S. policy toward Africa has focused on building trade ties, encouraging democracy and development and combating terrorism -- tenets that Blinken said would remain, along with countering climate change and improving access to healthcare.

The U.S.’s flagship economic program for the continent is the African Growth and Opportunity Act, which was enacted in 2000 and eliminated import levies on more than 7,000 products ranging from textiles to manufactured items. To qualify, countries must cut barriers to U.S. investment, operate a market-based economy, protect workers’ rights and implement policies to reduce poverty.

While the act, which is due to expire in 2025, has bolstered two-way trade, Africa has nurtured even closer relations with China, which has largely steered clear of domestic politics and offered aid, loans and investment with few strings attached.

Blinken acknowledged that many African countries “are wary of the strings that come with more engagement, and fear that in a world of sharper rivalries among major powers, countries will be forced to choose” between them.

“The United States doesn’t want to limit your partnerships with other countries,” he said. “We don’t want to make you choose. We want to give you choices.”

Blinken also announced that Biden intends to host a summit of African leaders to increase engagement and foster closer cooperation.

He noted that the U.S. had provided more than 50 million coronavirus vaccine doses to Africa with no strings attached and that more are en route. The U.S. has given more than $1.9 billion in Covid-19-related assistance to fund emergency food provisions and other humanitarian support, Blinken said.

The U.S. also supported the suspension of debt for 32 African countries to help their economies recover from the pandemic, he said.

Blinken expressed concern about a global rise in authoritarianism, with governments becoming less transparent, technology being used to silence dissent, corruption on the rise and elections becoming flash-points for violence.

The military has seized power in Sudan, Chad, Guinea and Mali over recent months, planned elections in Somalia have twice been delayed, while Ethiopia has been embroiled in a yearlong civil war.

“The recession of democracy in many places in Africa cannot be denied,” Blinken said. “I want to emphasize that democratic backsliding is not just an African problem --- it’s a global problem. My own country is struggling with threats to our democracy. And the solutions to those threats will come as much from Africa as from anywhere.”

When it came to addressing instability and violent extremism, Blinken said the solution lay in having effective, professional and well-equipped security forces and local law enforcement, while simultaneously addressing the root causes of conflict.

“We think we can achieve better results in confronting insecurity if we work together to expand economic opportunity, especially for young people and others who might be drawn into criminal activity out of desperation,” he said. He committed the U.S. to supporting diplomatic efforts to resolve conflicts in Africa, as it is currently doing in Ethiopia, Sudan and Somalia.