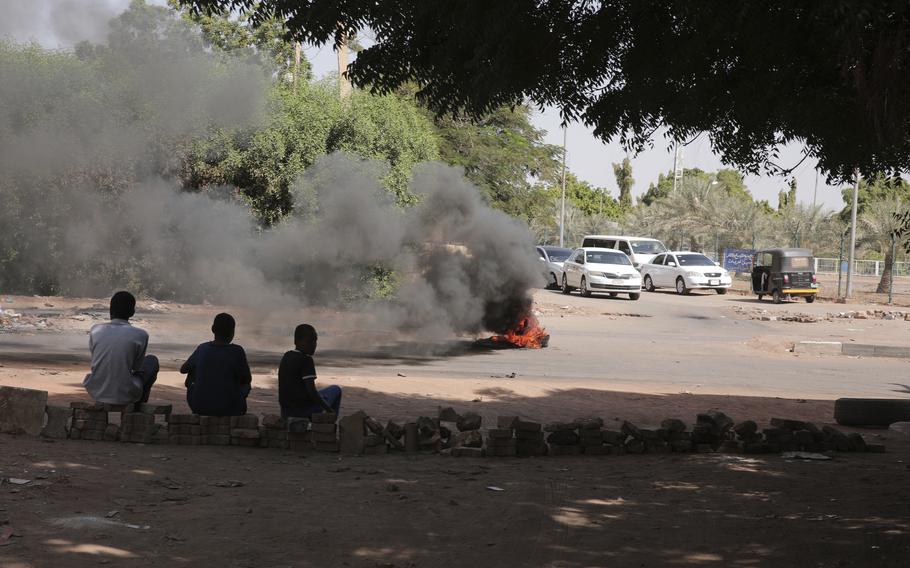 KHARTOUM, Sudan — Sudan’s security forces dispersed demonstrators and rounded up more than 100 people Sunday in the capital of Khartoum, in the latest crackdown on pro-democracy protesters after last month’s military coup.

The Sudanese military seized power Oct. 25, dissolving the transitional government and arresting dozens of officials and politicians. The coup has drawn international criticism and massive protests in the streets of Khartoum and elsewhere in the country.

The takeover has upended the country’s fragile planned transition to democratic rule, more than two years after a popular uprising forced the removal of longtime autocrat Omar al-Bashir and his Islamist government.

Teachers and education workers protested the coup outside the Education Ministry in Khartoum’s district of Bahri, according to the Sudanese Professionals' Association, which led the uprising against al-Bashir.

Local authorities announced the resumption of school classes in the capital for the first time since the coup.

Sunday was the first of two days of nationwide strikes called by the SPA, which vowed to continue protesting until a full civilian government is established to lead the transition. Several shops and businesses in Khartoum were seen open, according to a video journalist with The Associated Press.

The fresh crackdown has also come as mediation efforts between the military and civilian leaders have stumbled, according to a military official with knowledge of the ongoing efforts.

Mediators, including the United Nations envoy in Sudan, were still working to soften the stand of each side, as both are still stick to their pre-conditions before engaging in “meaningful, possibly direct talks,” the official said, speaking on condition of anonymity because he was not authorized to brief the media.

The deposed Prime Minister Abdalla Hamdok, who is still under house arrest in his residence in Khartoum, insists on releasing government officials and politicians detained in connection with the coup. He also wants “guarantees” that military would return to the pre-coup power-sharing arrangements, the official said.

The military, on the other hand, insists that the Oct. 25 events did not amount to a “coup,” and that it stepped in to “correct the course” of the transitional period, the official said.

It said the delegation, headed by Deputy Secretary General Hossam Zaki, held talks with Hamdok on the challenges of the transition and “ongoing efforts to support constructive dialogue" to re-establish a path to democracy.

The military has given mixed signals. It allowed four ministers to return to their homes under house arrest, according to Hadra, the lawyer. The four included Hamza Baloul, minister of information and culture, Hashim Hasabel-Rasoul, minister of communications, Ali Gedou, minister of trade and international cooperation, and Youssef Adam, minister of youth and sports. They were among more than 100 government officials and politicians detained following the coup.

The military also arrested three leaders from the Forces for Freedom and Change, a coalition that was born out of the 2019 protest movement, shortly after they met with U.N. officials in Khartoum. The meeting was part of U.N.-led mediation efforts.