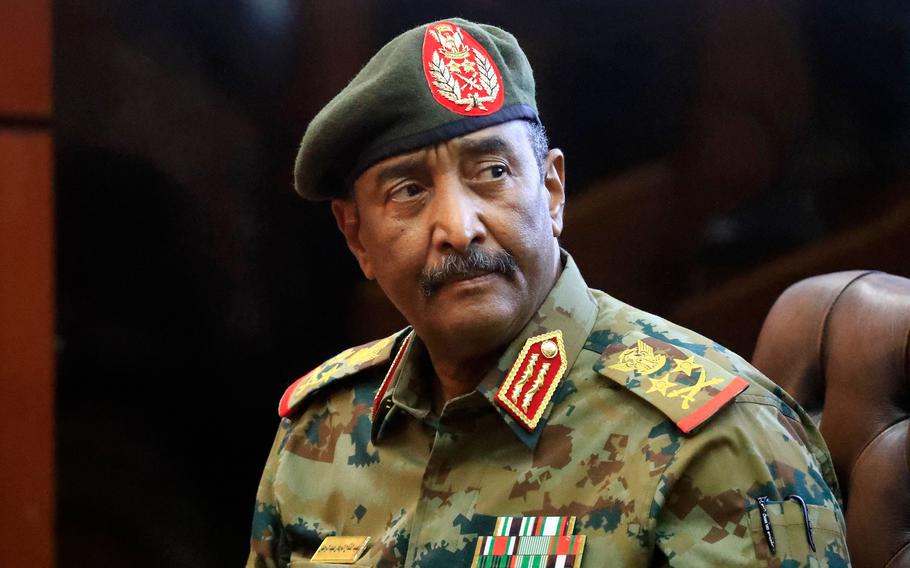 Sudan’s top army general Abdel Fattah al-Burhan holds a press conference at the General Command of the Armed Forces in Khartoum on Oct. 26, 2021. Angry Sudanese stood their ground in street protests against a coup, as international condemnation of the military’s takeover poured in ahead of a UN Security Council meeting. (Ashraf Shazly, AFP/Getty Images/TNS)

(Tribune News Service) — Sudan’s army and politicians are edging closer to a new power-sharing deal as international efforts intensify to reverse last week’s coup, according to people following the talks.

The Oct. 25 overthrow of the civilian-led government derailed a political process that was a rare bright spot in the Horn of Africa region bedeviled by dictatorship and conflict.

“I think they will reach a conclusion very soon,” Imad Adawi, the former chief of staff of Sudan’s military, said from Cairo after being briefed on talks by senior members of the army. “There are many facilitators, including Sudanese actors, South Sudan, African countries and the UN.”

Global condemnation of the putsch was swift, with the U.S. and World Bank cutting aid to pressure the military into releasing Hamdok and his detained colleagues. The U.S. had been cultivating new ties with Sudan following the 2019 ouster of long-time dictator Omar al-Bashir in mass protests, rescinding its 27-year listing as a state sponsor of terrorism.

Diplomats have said that al-Burhan sees the involvement of Hamdok, who’s still under house arrest and has his interactions controlled, in a new administration as key to winning credibility. Sudan had been ruled by civilian and military figures in an uneasy arrangement since 2019.

One proposal under discussion would see Hamdok given greater powers but with a new cabinet more palatable to the army, the people said, requesting anonymity because they aren’t authorized to speak to the media.

The army, in control for much of Sudan’s history since independence in 1956, would be in charge of the government’s powerful security and defense councils under the deal, the people said. The formation of a new sovereign council, the top executive body headed by al-Burhan until he said he was dissolving it, is still being discussed, according to the people.

The army and politicians are at odds over the cabinet appointments component, the people said, describing a deal as still elusive. The UN special representative said Monday “the contours of a package would become visible” in coming days.

The U.S. special envoy for the Horn of Africa, Jeffrey Feltman, said Tuesday the army knows support for Sudan’s economic development and debt relief, as well as World Bank and International Monetary Fund financing, depend on restoring the democratic path.

Feltman said he was surprised by the coup, which happened hours after he’d left Sudan having tried to mend military-civilian ties.

Asked if the army deceived him, Feltman said: “I wouldn’t go so far to say they lied. What I would say is they seemed to be talking to us in bad faith.”