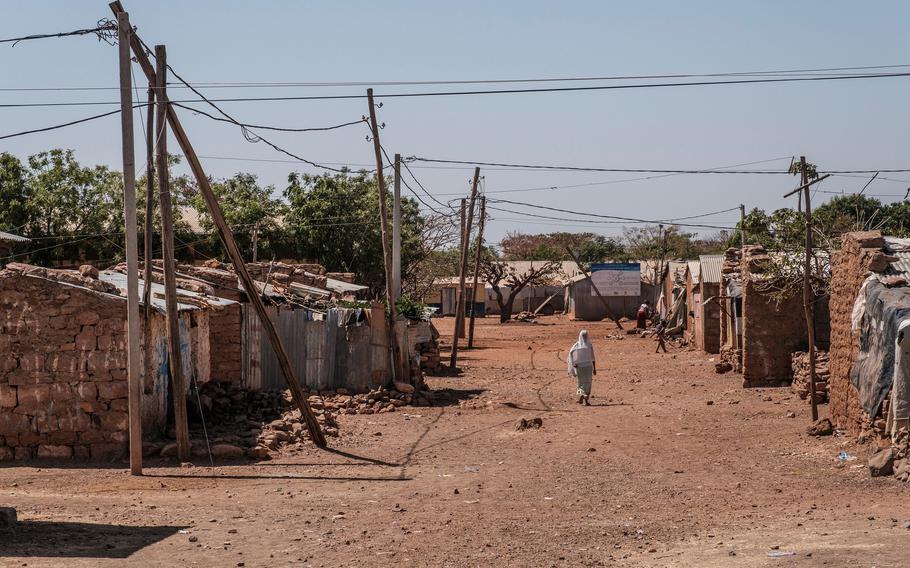 A general view of the Mai Aini Refugee camp, in Ethiopia, on January 30, 2021. The worsening conflict in Ethiopia is raising alarms in the White House and on Capitol Hill over humanitarian fallout. (Eduardo Soteras/AFP/Getty Images/TNS)

WASHINGTON (Tribune News Service) — The worsening conflict in Ethiopia, Africa's second-most populous country, is raising alarms in the White House and on Capitol Hill over humanitarian fallout, including the growing risk of mass starvation and even a full-fledged civil war that could destabilize an entire region.

Some 1 million people in Ethiopia's northern Tigray area are experiencing famine-like conditions, and an estimated 5.2 million of the region's 6 million people need some form of humanitarian aid, according to the U.S. Agency for International Development. But the delivery of food, medicine and fuel supplies is being blocked by the government of Ethiopian Prime Minister Abiy Ahmed, who last month exhorted civilians to join the army's mass recruitment drive in the fight against Tigrayan rebel forces.

President Joe Biden on Friday signed an executive order establishing, but not yet imposing, a new sanctions regime specific to Ethiopia. The order opens the door to the imposition of travel bans and asset freezes on individuals and entities that are prolonging the fighting, blocking efforts to reach a ceasefire or obstructing the delivery of humanitarian aid. The order covers members of the central Ethiopian government and army; the neighboring Eritrean government, which has allied with Abiy; the Tigray People's Liberation Front; and the regional government of Amhara, where fighting has spread to.

Biden's executive order is supported by Democrats and Republicans alike in Congress.

Administration officials, speaking on the condition of anonymity, last week told reporters their hope is the threat of sanctions will be enough to prod the warring parties to lay down their arms and begin peace talks. But the clashing factions have "weeks, not months" before the threatened sanctions are made real, one of the officials said.

"The actions of those involved in the conflict will determine whether the U.S. government imposes sanctions," Biden said in a statement accompanying his order. "The United States is prepared to impose sanctions if there is not progress toward a resolution of the conflict. If there is progress, the United States is prepared to work with the international community to mobilize critical assistance for Ethiopia to recover from this conflict."

In order to avoid putting the sanctions in place, Biden administration officials want to see the opposing factions accept African Union-led mediation efforts, designate negotiators to those peace talks and enter negotiations without preconditions. Additionally, daily convoys of humanitarian aid trucks must be allowed into Tigray and basic services restored there. That includes electricity, telecommunications and banking services.

But, so far, the threat of sanctions has showed no signs of coercing a change from Abiy's government.

The Ethiopian prime minister, who won the 2019 Nobel Peace Prize for his resolution of a long-running border conflict with Eritrea, categorically rejected any criticism and accused Biden of treating his government more "sternly" than the Tigray People's Liberation Front, which he called a terrorist organization.

"Ethiopia will not succumb to consequences of pressure engineered by disgruntled individuals for whom consolidating power is more important than the well-being of millions," Abiy said in an open letter to Biden that was posted on his official Facebook page Friday. "Our identity as Ethiopians and our identity as Africans will not let this come to pass. The humiliation our ancestors have faced throughout the continent for centuries will not be resuscitated in these lands."

Meanwhile, the TPLF largely welcomed Biden's executive order, calling it "long overdue" and a "step in the right direction."

The Saturday statement from the Liberation Front, which was shared on Twitter by a verified account belonging to the adviser to the president of Tigray State, did not acknowledge any role in the atrocities committed over the past year in northern Ethiopia.

"The government of Tigray is ready to support and abide by the core tenets of the executive order," reads the statement. "We are ready to play our role in bringing about a negotiated ceasefire and ultimately a negotiated peace settlement that affirms and protects the rights and interests of the people of Tigray and other Ethiopians."

While Biden has said all participants in the conflict "have committed human rights abuses against civilians," the State Department has yet to conclude what it has described as a "law and fact-based review" on "whether atrocity crimes have been committed in Tigray," a department spokesperson said Tuesday.

Over the last month, less than 10 percent of needed humanitarian assistance has been able to reach Tigray because of obstruction, according to Biden administration officials.

Abiy's hard line on refusing to enter into negotiations with the TPLF is largely backed up by the Ethiopian diaspora, many of whom live in the greater Washington region and are loyal to the prime minister.

"The Ethiopian government, in my view, has very stupidly set up the administration as an adversary engaged in a conspiracy against it, which is frankly stupid," said Alex de Waal, a research professor at Tufts University and expert on the Horn of Africa.

Behind the scenes, other African governments welcomed the executive order even as they feel too inhibited by Ethiopia's prominent diplomatic and historical leadership role on the continent to admit so publicly, de Waal said in an interview. "Privately, every African leader I know … they are terrified of Abiy. They basically see him as a reckless demagogue."

With a population of roughly 110 million, Ethiopia is the oldest independent African country. Though democracy has been scant in Ethiopia, Addis Ababa, its capital, has earned regional and international respect for its focus on economic development and its ability to deliver real improvements to citizens' quality of life.

Ethiopia also has been a bulwark for African multilateralism. The African Union's headquarters are located in Addis Ababa, and the Ethiopian Foreign Ministry's diplomatic corps until very recently was the envy of the continent, according to de Waal.

If a ceasefire is not reached soon, de Waal said he fears a point of no return that could lead to the splintering of Ethiopia, which is home to more than 90 ethnic groups with their own distinct languages, cultures and territories.

"The Tigrayan sentiment is becoming very separatist. If Tigray fights a separatist war, it may win. It's pretty militarily capable, particularly if they are convinced that there is a genocidal intent against them," said de Waal, who leads the World Peace Foundation, which is affiliated with The Fletcher School of Law and Diplomacy at Tufts. "Tigrayans abused the federalist system when they were in power but maintained the principles of it, including cultural and linguistic [rights] for minorities."

Ethnic minority groups in Ethiopia prize that federalist system. Even as there is little affection for the TPLF among non-Tigrayans, "they see Abiy now as the greater of the two evils and his Amhara backers," said de Waal. "They see the ethnic animosity aimed against the Tigrayans as Amhara ethnic nationalism that will be directed against them in due course."

Leading foreign policy-minded Senate Democrats say they are planning to announce a new bill in a matter of weeks that would "drastically bolster U.S. efforts to pursue accountability for the carnage in the Tigray region."

"Continuing human rights abuses by the parties to the conflict in Ethiopia," the duo said, "warrant an unequivocal response: We will not tolerate war crimes, crimes against humanity, and ethnic violence."