The northern Ethiopia conflict may be headed for a dangerous turn after Prime Minister Abiy Ahmed's unilateral cease-fire failed and he backed calls to resist Tigray forces advancing to retake territory.

The Tigray People's Liberation Front, which federal troops had initially overrun after fighting that started in November, recaptured the state capital, Mekelle, and have taken back control of more towns, including Mai Tsebri, Alamata and Korem, according to TPLF spokesman Getachew Reda.

The cease-fire failed to bring peace, Abiy said in a statement on Wednesday.

"The government urges the people of Ethiopia to stand together," Abiy said, and continue supporting the defense forces "in every way possible and defend the country's sovereignty."

The prime minister's comments come days after his party was declared the winner of last month's election, and highlights the challenges he has to overcome to unite Africa's second-most populous nation. The Tigray conflict, which started eight months ago when Abiy ordered an incursion in retaliation for an attack on an army base, has led to thousands of deaths, and the United Nations has warned that more than 900,000 people are on the brink of famine.

Abiy echoed earlier statements from Amhara officials to resist their Tigrayan neighbors' return. Some of the towns the TPLF is targeting or has recaptured have been contested territory for decades. Amharans say they had rights to the lands until a TPLF-led uprising overthrew the Marxist regime in 1991 and reconfigured ownership.

Some Amharans moved into the region when federal forces drove out Tigray's leaders, and plan to stay.

"We have sent over two thousand militias to the front," Simenhe Ayalew, the administrator of Western Gojam Zone in Amhara, said on the regional state-controlled broadcaster on Tuesday. They plan to raise at least 204 million birr ($4.6 million) in cash and kind from communities to defend the territory, according to Simenhe.

In his statement, Abiy said the TPLF's actions are "irresponsible" and pose "a greater danger" to Ethiopia. "We will facilitate humanitarian works and defend the country," Abiy said. He, however, didn't say if he plans to redeploy federal forces to fight in Tigray.

Abiy also accused the Tigrayan army of recruiting children into its ranks and turning key humanitarian corridors into war zones. "The junta soon forgets the famine accusations (against the government) and intensified its military activities," he said.

Since coming to power in 2018 and unbanning opposition and rebel groups, Abiy has faced several security challenges besides the Tigray war. There have been violent protests in Oromia, inter-communal fighting in Western Benishangul-Gumuz and Amhara regions, as well as a series of high level assassinations.

"Operations are underway to capture the lowlands before Humera and the Wolkait highlands as well," TPLF's Getachew said via satellite phone. 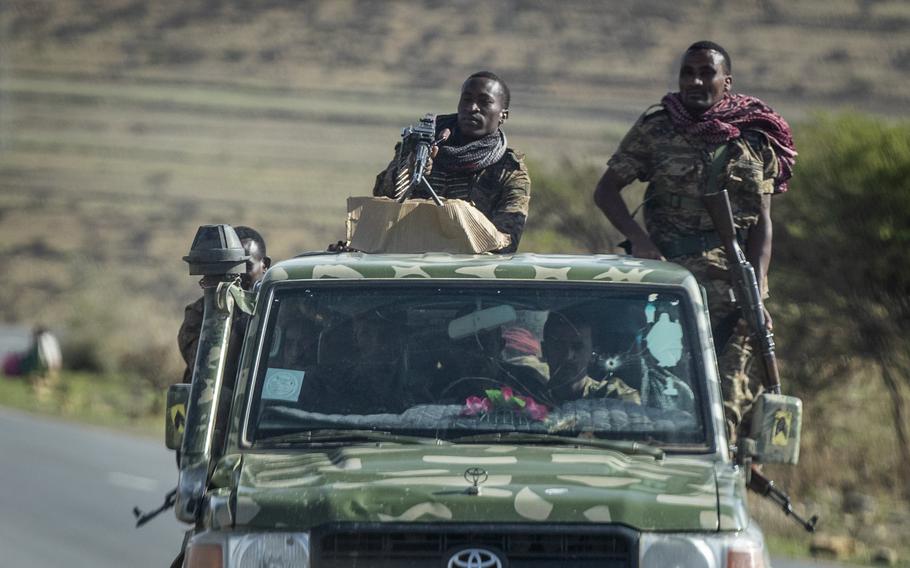 In this Saturday, May 8, 2021 file photo, Ethiopian government soldiers ride in the back of a truck on a road near Agula, north of Mekele, in the Tigray region of northern Ethiopia. (Ben Curtis/AP)