Addressing the nation for a second straight night, South African President Cyril Ramaphosa condemned the unrest as "opportunistic acts of criminality" and said the military was being deployed to restore calm.

"Parts of the country are reeling from days and nights of public violence, destruction of property and looting of a sort rarely seen before in the history of our democracy," Ramaphosa said.

The violence began with blockaded roads and the burning of trucks in KwaZulu-Natal Province, the Zulu tribal homeland, on Friday, after Zuma went to prison. Unrest then spread to Johannesburg, the country's largest city and center of industry, where shopping malls have been looted and burned, and highways blocked.

"At the beginning of this unrest, there may have been some people who sought to agitate for violence and disorder along ethnic lines," said Ramaphosa, referring to initial protests by supporters of Zuma, who was the country's first Zulu president. "However, what we are witnessing now are opportunistic acts of criminality with groups of people instigating chaos merely as a cover for looting and theft."

Meanwhile, the nation braced for the possibility of more unrest as the country's highest court considers an appeal this week by Zuma of his 15-month prison sentence. After hearing legal arguments on Monday, the Constitutional Court did not making a ruling and will continue deliberations.

Local television footage showed mass looting at shopping malls in parts of Johannesburg, as well as Durban and Pietermaritzburg in KwaZulu-Natal, with looters making off with televisions and other appliances, while businesses were burned and major highways closed. The numbers of looters far exceeded visible police presence.

More than 400 people were arrested, Ramaphosa said. Ten people — six in Gauteng and four in KwaZulu-Natal — died in the violence, he said.

The military had been deployed in support of the police, the South African National Defense Force said.

Protests erupted in KwaZulu-Natal Province after Zuma handed himself over to prison authorities on July 7 under order from the Constitutional Court, which held him in contempt for repeatedly refusing to appear before a commission investigating allegations of corruption during his nine years as president that ended in 2018. Zuma has denied widespread corruption during his presidency.

The unrest comes as South Africa battles a severe third wave of the coronavirus pandemic driven by the highly contagious delta variant. More than a year of restrictions has exacerbated poverty and unemployment across the country, which has long suffered from extremely high levels of joblessness and inequalities that persist nearly three decades after the end of apartheid in 1994.

The provincial government of Gauteng, which has been hit hardest by the third wave, said vaccination sites were closed because of the protests and emergency services were struggling to respond to distress calls because of limited access.

In power for 27 years since South Africa's first fully democratic election in 1994, the African National Congress finds itself divided over the legacy of Zuma and whether he should be imprisoned at age 79. The initial protests in support of Zuma after his jailing were by Zulu supporters rallied by family members and ANC officials loyal to the former president.

Zuma's presidency was beset by reports of systemic corruption so prevalent that it received its own label of "state capture," referring to influence peddling that gave outsiders a say in government policy and appointments.

According to testimony to the Zondo Commission investigating corruption during his presidency, Zuma was involved in bribery in exchange for influencing government ministries and policies. Separately, Zuma faces charges of corruption related to a 1999 arms deal in which he allegedly received bribes from a French arms manufacturer. 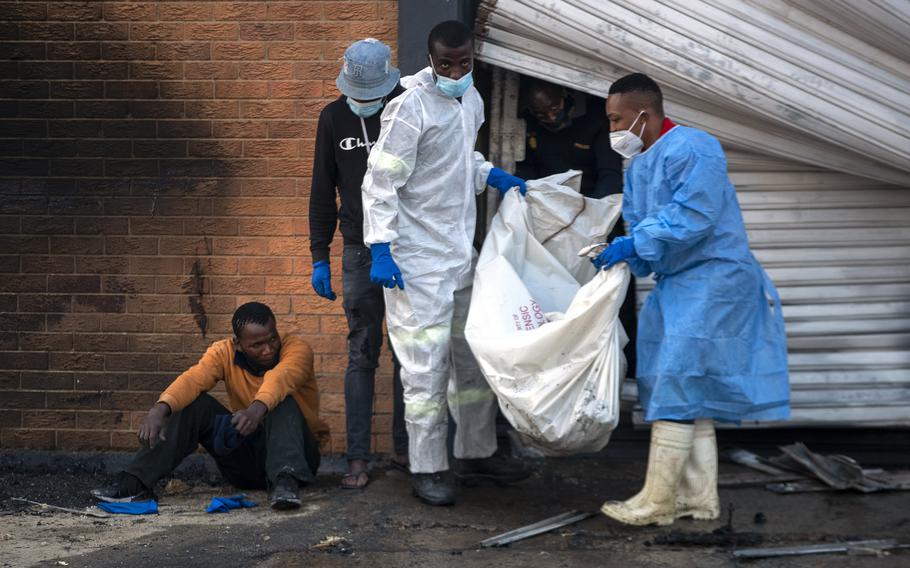 A family member watches on as police forensics officers carry the body his brother who was found inside a burned shop, in Johannesburg, South Africa, Sunday, July 11, 2021. (Themba Hadebe/AP)