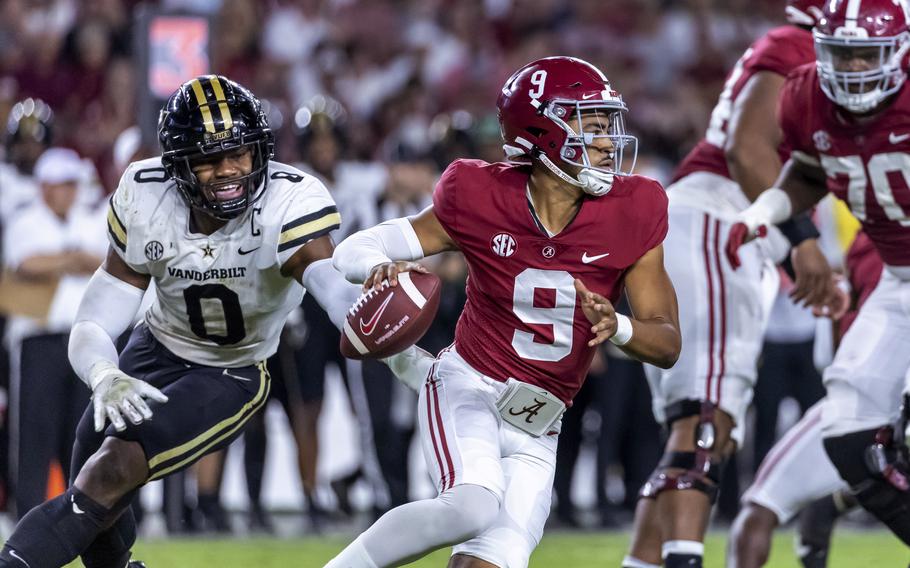 Alabama quarterback Bryce Young (9) works away from pressure from Vanderbilt linebacker Anfernee Orji (0) on Sept. 24 in T. The Crimson Tide during the second half of an NCAA college football game Saturday, Sept. 24, 2022, in Tuscaloosa, Ala. (AP Photo/Vasha Hunt) (Vasha Hunt)

Alabama has mostly breezed through the first month of the season, with one big scare and three games that were frightfully but predictably easy.

How good is 'Bama, really? Check back in a few weeks.

The second-ranked Crimson Tide (4-0, 1-0 Southeastern Conference) start a three-game stretch against ranked teams with Saturday's visit to No. 20 Arkansas (3-1, 1-1). Then comes No. 17 Texas A&M and a visit to red-hot eighth-ranked Tennessee.

“It’s the SEC, that’s why you come to Alabama to play in the SEC and in games like this,” Alabama linebacker Will Anderson Jr. said. “It’s not going to be our first time going on a stretch like this. We play good teams all the time out here in the (SEC) West.”

But there's seldom such a stacked lineup of games in the division. Assuming the rankings hold up, it will be the first time since 2016 that Alabama has played three straight Top 25 opponents in the regular season.

Last season, the Tide went 6-1 in Top 25 games, including a national championship game loss to Georgia. Alabama did, however, lose to an unranked Texas A&M team.

The collective record of the Tide's seven remaining SEC opponents: 23-5, including unbeaten and 14th-ranked Mississippi on the road. But three of the toughest teams come in the next three weeks.

By far Alabama's harder game to date this season was the20-19 win over Texas on a late field goal by Will Reichard. The Longhorns just lost again, in overtime to Texas Tech.

The Tide's wins over Utah State, Louisiana-Monroe and Vanderbilt came by a combined score of 173-10.

Bryce Young and Alabama unleashed their best downfield passing performance of the season in a 55-3 win over the Commodores in the SEC opener. Tide coach Nick Saban said afterward his team has shown steady progress in the opening month.

“The challenges get greater as we go, so we have to continue to focus on moving forward, improving,” Saban said. “I think the team played really well. I think the team sort of bought into everybody trying to play to a standard, and I think this is probably the closest we’ve come to it this year.”

Alabama will likely have to continue that trend to navigate the next three games unscathed. The Tide are favored by 16.5 points over quarterback KJ Jefferson and the Razorbacks, according to FanDuel Sportsbook. Arkansas is coming off a 23-21 loss to Texas A&M.

Tennessee is fresh from a 38-33 win over Florida.

“It’s a big stretch,” Young said of the next few games." We understand that whenever we get into SEC play, anything can happen. So this is why we’re all here, SEC ball. This was a good start and we have to carry that momentum. ... We know it’s going to be a big challenge (this) week. We know it’s going to take everything.”