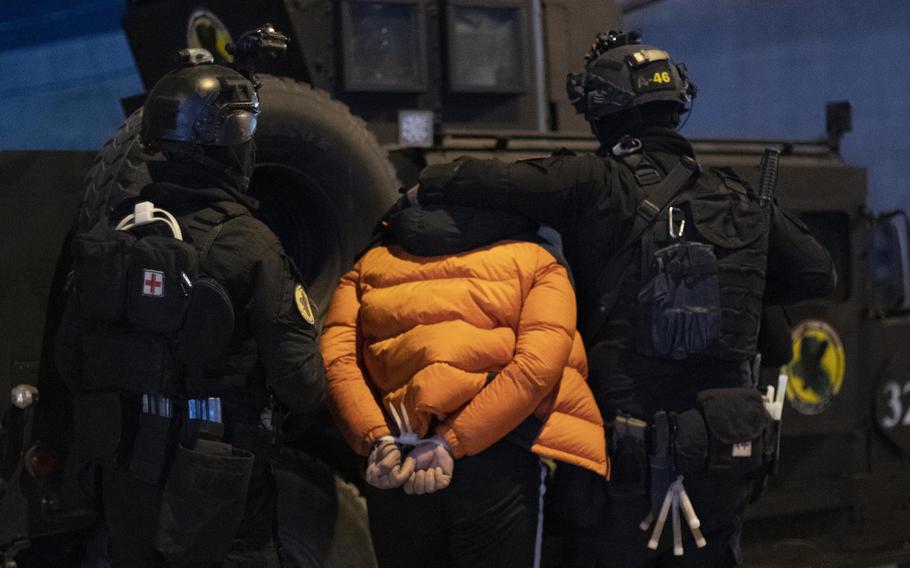 120p na Shaker al-Issawi, also known as Abu Waheeb, a man suspected to be a former member of the Islamic State, is taken into custody in Fallujah, Iraq, on Jan. 17, 2021. MUST CREDIT: Photo for The Washington Post by Charles Thiefaine (Charles Thiefaine) 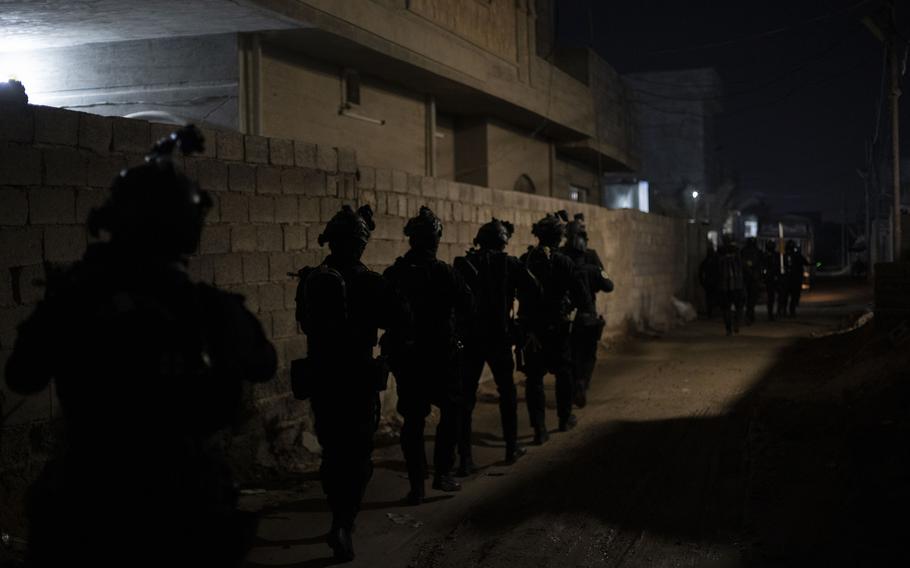 120p na Members of Iraq's Counterterrorism Service approach the location of a suspected former member of the Islamic State in Fallujah, Iraq, on Jan. 17, 2021. MUST CREDIT: Photo for The Washington Post by Charles Thiefaine (Charles Thiefaine) 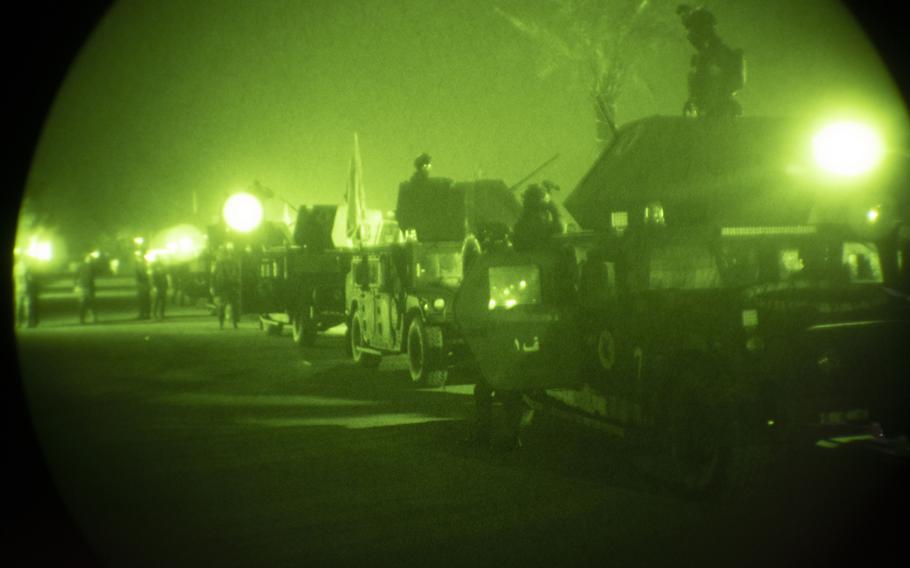 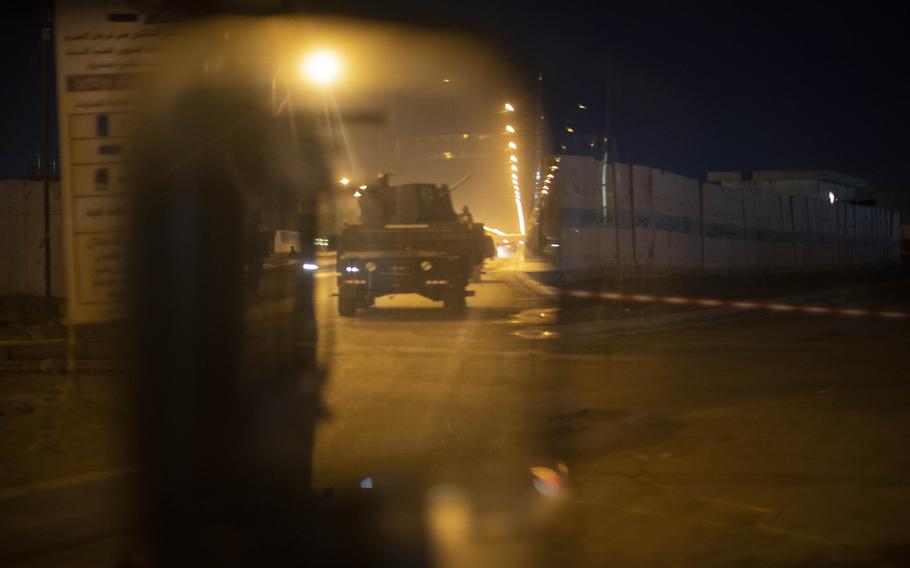 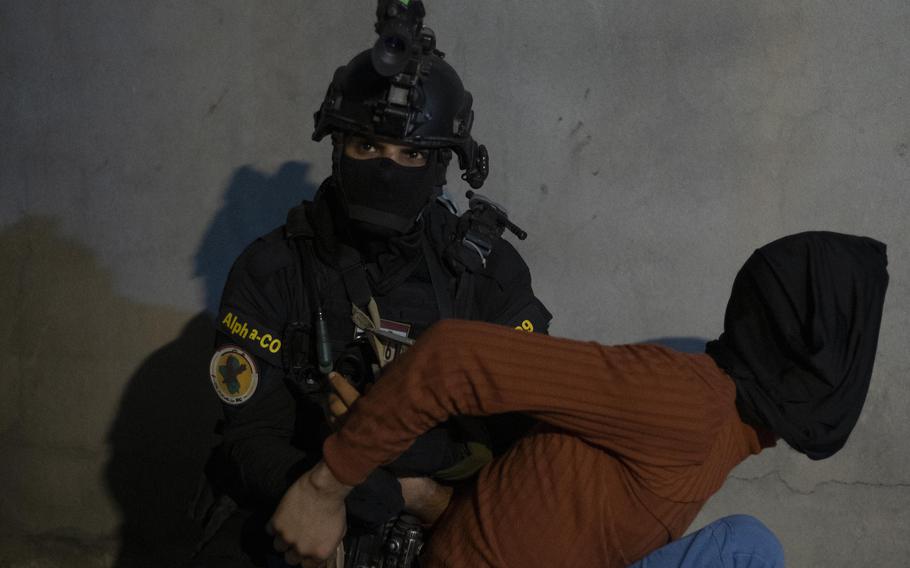 120p na A member of Iraq's Counterterrorism Service detains the brother of a suspected former commander of the Islamic State in Fallujah on Jan. 17, 2021. MUST CREDIT: Photo for The Washington Post by Charles Thiefaine (Charles Thiefaine)

FALLUJAH, Iraq - The Humvees stopped two miles from the city limits, lights twinkling hazy on the horizon. Inside the armored vehicles, elite soldiers sat in darkness. Radios crackled, and the commander told his unit to wait. Their informant had not confirmed the target yet, he said. Everyone: hang tight.

Minutes passed, the soldiers readied their guns, then, finally, the order came: "He's at the location. Now move." Engines revved, the vehicles lurched forward, and suddenly they were coursing through the night toward an uncertain objective that had eluded Iraq's security forces for months.

As the United States withdraws troops from Iraq, this is the new face of the fight against the Islamic State. With the group's self-described caliphate ousted from Iraq and Syria, the need for U.S. airstrikes and ground troops has diminished, and Iraqi security forces are taking the lead on the next phase of the battle.

This campaign is quieter than before, and often out of sight. Iraqi soldiers hunt ragtag bands of militant fighters in the foothills. Steadily, in the background, Iraqi security forces are rolling up sleeper cells and arresting financiers, such as the target this recent night - whom the Iraqis described as part of a network that sustains the insurgency's support base through money transfers to the families of dead Islamic State fighters. The residual U.S. force of about 2,500 troops supply what American and Iraqi officials describe as vital intelligence about targets.

How this effort unfolds, experts say, will shape the future of the Islamic State - whether its remaining foot soldiers can be hunted down or it retains the potential to reignite the insurgency. Questions also linger about the capacity of the security forces to eradicate it without Iraq addressing the grievances, including corruption and government abuses, that helped give rise to the Sunni Muslim extremist group in the first place.

Three years after Iraq announced that it had defeated the Islamic State, security officials estimate that there are several thousand militants in the country. For the most part, they are lying low or exploiting security gaps in rural areas to launch small-scale attacks, targeting, for instance, power lines and ambushing the Iraqi forces hunting them.

But the group is still capable of carnage. In January, two suicide bombers killed at least 32 people in a crowded Baghdad market and the Islamic State took responsibility.

Hospitals were overwhelmed with casualties. Inside the city's morgue, shocked pathologists asked one another whether the city was returning to its bloody past after three years without such bombings.

Several hours before the raid last week, several dozen Counterterrorism Service officers had gathered at a military base near the Baghdad airport, meeting around a wooden table as Maj. Gen. Hussein al-Azawi laid out their mission. Barrel-chested with a thick black mustache, Azawi was among the few men in the room not wearing a balaclava. His officers listened intently.

Their target would be Shaker al-Issawi, known also as Abu Waheeb, an alleged militant from the city of Fallujah. Issawi's backstory had been found through Iraqi and American intelligence, Azawi said. Now the suspect's whereabouts were to be confirmed by a secret informant. An arrest warrant was ready. The troops would move at 11 p.m., and by midnight they would be in position.

But Issawi's precise location was still unclear. On a map, another commander, Col. Muhannad al-Tamimi, pointed to three sites, each closer than the last to a local cemetery. In the worst-case scenario, the troops were told, they could encounter explosives along the road or sniper fire from above. Some soldiers were to take to nearby rooftops to watch for a potential ambush while others would comb each location until they found the suspect. In previous raids, suspects had been found in bushes and water tanks.

"Three kilometers from the city limits, we'll wait for the source to confirm," Tamimi said. "Wherever he is, we will find him."

It was not possible to independently confirm the allegations against Issawi.

"You're not the first force to try this mission. Two have failed before us," Azawi told the room. "He's in the middle of a city, there are civilians everywhere, and the enemy might use empty buildings as cover."

As one of the officers glanced briefly at the floor, the commander reminded them of the battles they had fought. "You've fought in Fallujah. You know every street and every alleyway," he said. "Eat a meal, hydrate, and prepare the cars. I wish you all the success."

At least three U.S. troops were present at the Baghdad military base that evening. They seemed taken aback by the presence of Washington Post journalists and declined to speak with them. They did not accompany the Iraqi troops on the raid.

With major battles against the Islamic State complete, the U.S.-led coalition has pulled out most of its troops, down from about 5,000 American soldiers and several thousand more allied troops at the peak of the campaign.

And while the U.S. drawdown from Iraq has left domestic forces taking the lead on missions against the Islamic State, Iraqi security officials and Western security experts say intelligence support from U.S. and coalition troops remains vital to rolling up the militant group's networks. U.S. and coalition forces also continue to provide air support for Iraqi operations, fly surveillance drones, and advise and train Iraqi security forces. On Friday, the coalition said it had partnered with Iraqi troops in killing one of the Islamic State's most senior leaders in Iraq, Jabbar Salman Ali Farhan al-Issawi.

Iraq's Counterterrorism Service, the country's U.S.-trained elite force, says it has arrested about 350 militants in the past six months, some during military engagements, others during nighttime raids.

Col. Wayne Marotto, a spokesman for the coalition, said 68 operations against alleged Islamic State militants have been carried out this year by the coalition, its partner forces, including Iraq's, or both. He did not elaborate on the type or size of the missions.

"There's a lot that we can still help with," said Mike Knights, who specializes in Iraqi security matters as the Bernstein Fellow at the Washington Institute. "We're talking sensitive site exploitation, making sure the phones and hard drives are seized during raids and that the Iraqis can extract data that is actionable straight away."

The convoy of a dozen Humvees drove fast through the night, reaching Fallujah by early morning. The elite soldiers, wearing night-vision goggles, jumped out and moved quietly in a line down a dark side street leading to Issawi's house. They clasped their rifles, at times pointing them upward as they scanned the rooftops for threats.

Local security forces had locked down the surrounding streets. The only civilian bystanders, it seemed, were boys on bicycles. They joked among themselves but also looked wary, waiting and watching to see what followed.

When the soldiers reached the house - a white one-story structure - they bashed open the iron gate to its small yard with their rifle butts.

Suddenly the night filled with yells and wailing. Next door, three men were dragged out of their home and made to kneel against a wall.

Issawi, wearing sweatpants, was brought out without a fight. His head was bowed below the weight of a soldier's arm.

The alleged militant uttered barely a word. But his sister was screaming, imploring the soldiers to let him be. "Please don't take him, please don't take him," she cried. At the doorway, a young boy also watched and his eyes were a picture of terror.

Within minutes, Issawi was on the floor of the concrete yard as three soldiers stood above him, tying his hands and photographing his face. He looked older, more tired than the image they had seen before. They checked his identification card against details on a clipboard.

The soldiers bundled Issawi into a Humvee, and the convoy screeched off, heading back to Baghdad. The raid had taken 17 minutes.

What would become of Issawi remained unclear. A senior Counterterrorism Service official later said Issawi had been put under investigation by a judge linked to the counterterrorism force. More than 20,000 people are jailed on terrorism charges, according to judicial records, often held in detention centers that security and judicial officials say are overwhelmed. The number of individuals held in pretrial detentions on similar charges is unclear. Human rights groups have long criticized what they say is a lack of due process and poor, sometimes abusive, conditions.

As the vehicles headed back to Baghdad, the tension inside broke. A driver smiled for the first time that evening. Another passed chocolate cookies around to his team. His commander's voice kept crackling over the radio, telling the men to maintain their discipline. "You're driving too close together now," he told them. "I'll keep you on base for a week if you don't stop that."

The convoy pulled up at its base near the Baghdad airport. An American soldier was visible in the distance.

As Col. Tamimi slipped out of the Humvee, he asked his men to bring Issawi's jacket. They placed it over his shoulders and walked him off into the night.