80p na Tech Sgt. Bryan Moody, a member of the Kentucky Air National Guard Security Forces, was part of an Air Force security forces team on the night of the Iranian attack. MUST CREDIT: Photo for The Washington Post by Luke Sharrett (Luke Sharrett) 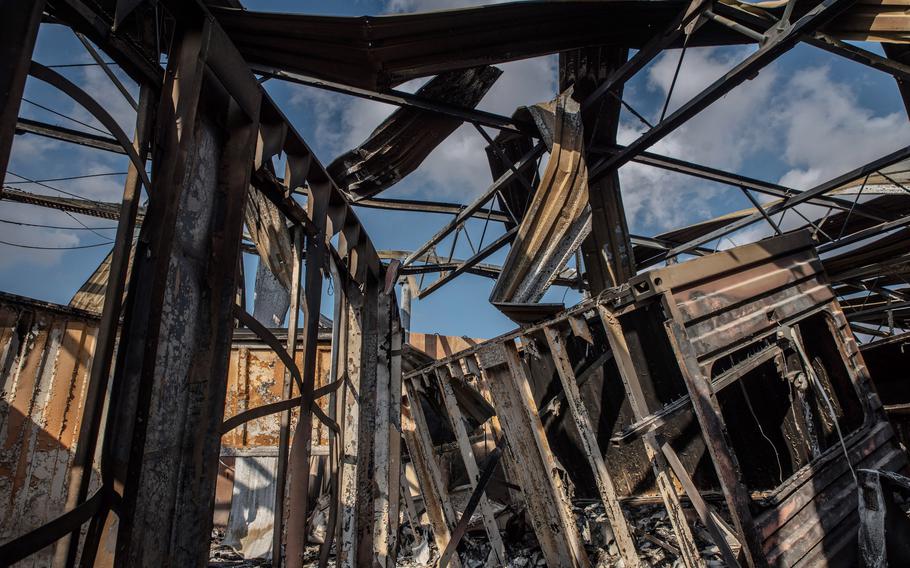 93p na A damaged building, hit by Iranian airstrikes, inside the Ain al-Asad base near Anbar, Iraq, on Jan. 13, 2020. MUST CREDIT: Photo for The Washington Post by Emilienne Malfatto (Emilienne Malfatto)

The U.S. soldiers scrambled from one bunker to the next, stumbling past charred wreckage, 30-foot-wide craters and puddles of diesel fuel. A barrage of ballistic missiles had briefly knocked some of them unconscious, and more were on the way.

Maj. Alan Johnson struggled to focus after absorbing the monstrous blast waves of several explosions, including one that missed his bunker by about 60 feet, he recalled.

"I still have anxiety," Johnson said. "I still have recurring nightmares of incoming - just that sound of those things coming in."

The United States stood at the precipice of full-scale war a year ago when Iran launched 16 missiles at U.S. forces in Iraq. Eleven struck Ain al-Asad air base in the western part of the country, another landed outside the northern city of Irbil and four malfunctioned, the military said.

After months of escalating confrontation, Iranian-backed forces had laid siege to the U.S. Embassy in Baghdad about a week earlier. The Trump administration responded a few days later by launching a drone strike in Baghdad that killed an Iranian general, Qasem Soleimani, a longtime U.S. nemesis.

Facing the gravest international security crisis of his presidency, President Donald Trump suddenly shifted gears. "All is well!" he tweeted within hours of the attack on Jan. 8, 2020.

A year later, service members who endured the attack described how close the United States and Iran came to greater calamity.

No U.S. troops were killed despite Iran's use of weapons that were each about 40 feet long and carrying 1,600 pounds of explosives, more powerful than any weapon launched at Americans in a generation.

But 110 survivors were ultimately diagnosed with traumatic brain injuries, some requiring long hospitalizations and intensive therapies at the Walter Reed National Military Medical Center outside Washington, D.C. The military disclosed the injures days after the strike, saying that an earlier Trump announcement that there were "no casualties" was based on the best information the Pentagon had at the time.

In reality, 29 services members, including Johnson, were injured seriously enough to receive Purple Hearts in the strike, which the Iranians called Operation Martyr Soleimani.

The attack left some with feelings of anger and helplessness. Survivors are still pondering a night that increasingly seemed overlooked in a year that went on to include the coronavirus pandemic, a fraught national conversation about race and one of the most contentious presidential elections in American history.

"I can't think that anyone has walked away from this without some sort of effects, psychologically or emotionally, because of how traumatic the event was," said Lt. Col. Johnathan Jordan, the operations officer for an Air Force unit present that night.

Almost immediately after the strike on Soleimani, U.S. troops across the Middle East started preparing for possible Iranian revenge.

His unit began assessing how many people they could pack into their aircraft, a CV-22, if a quick escape was needed.

It was Jan. 7 when the severity of the threat became clear: Iran wasn't planning to attack with rockets, which can kill a couple of people at a time, but with much more powerful missiles launched from miles away across the Iraqi border.

Jordan said he and his commander, Lt. Col. Staci Coleman, drew up a plan. Half of the 160 airmen they oversaw would leave on a C-130 with Jordan leading them, she decided. The other half would stay with Coleman, hunkering down in bunkers.

"We were expecting just total devastation at that point," Jordan recalled.

Elsewhere on the base, scores of U.S. Special Operations troops prepared to leave on three CV-22 aircraft, each with 24 seats. Levander's team calculated they could pack in many more, ultimately removing 194 people, according to an award citation first reported by Air Force Times.

Others had to stay.

Air Force Senior Master Sgt. Noal Yarnes took cover in a fortified structure, telling the airmen under his supervision to bring their gas masks - just in case. The missiles, he knew, were capable of carrying chemical weapons.

Johnson, working with soldiers on another part of Al Asad, decided to record a video message for his son, Jack, now 7. He wanted to leave behind some last words, he said, just in case "something bad happened to Dad."

Moody, a member of the Kentucky Air National Guard, and his colleagues drove around in an mine-resistant truck, making sure the base was secure. Other troops stood watch in guard towers, vigilant in case a ground attack also materialized, while nearly everyone else left on the base sheltered in place.

The warning rang out over loudspeakers after 1 a.m.: "Incoming! Incoming! Take cover!"

The first missile exploded at 1:34 a.m. about 100 yards from the mine-resistant vehicle that Moody's team was driving, casting debris on the hood. The reinforced doors were blown open by the concussive blast of missiles, which landed about 300 yards away but sounded much closer, said Staff Sgt. Drew Davenport, another member of the team.

Johnson, assigned to an Army aviation unit, huddled with soldiers in an aboveground shelter. With open-air sides and sandbags covering concrete, the bunker was designed to stop smaller rockets - not missiles.

Johnson has no recollection of the first three blasts, and believes it is because the third briefly knocked him and other soldiers in his bunker unconscious. It had landed about 70 yards away.

The fourth exploded about 300 yards away. The fifth and sixth missiles whooshed in about 40 seconds later - one 120 yards away, and the other just 60 feet. Johnson tasted "ammonia-flavored moon dust" on his teeth before he lost consciousness again.

Elsewhere on base, new dangers erupted along with the fires.

During a break in missile volleys, Moody and the rest of his team decided they would be safer relocating. They drove to a spot overlooking the vacant airfield, cut their headlights and waited, Davenport said.

The plan seemed to have promise - briefly. As more missiles streaked through the sky, the airmen braced for impact. One missile exploded about 150 feet away, a blast wave washing over their truck as fire, smoke and debris belched into the night air.

"I didn't even have time to be scared," Davenport said. "I was just so pumped full of adrenaline. I remember that mushroom cloud and that bright red, orange color vividly. It was one of the wildest things I've ever seen."

Four missile volleys lasted more than an hour, one coming about every 15 minutes.

During lulls in the barrage, their team and other security forces rushed to check on others on base.

Among those in need of help were two soldiers trapped in a guard tower that was on fire, Moody said. A missile had landed nearby, and they were unable to climb down from their 12-foot-high perch because of the flames.

To help them, the Air Force team backed their truck up close, allowing the soldiers to leap down on top of the vehicle instead of hurtling all the way to the ground, the airmen said.

A medic, Spec. Robert Jones, hustled to pull him to another bunker, Johnson said.

Jones, now a sergeant, was later recognized for his actions with an Army Commendation Medal for valor.

Even with the attack over for hours, there was little movement on the base at daybreak.

Levander said his crew's CV-22 flew over the base early that morning. Virtually no one had left their bunkers yet, and hangars were still on fire, he said.

When he and his colleagues returned to their living area, they found soap dispensers blown off walls, lights hanging askew, and electric generators that had stopped.

He and several of his teammates were later recognized with the Distinguished Flying Cross for their efforts.

Soldiers who had survived in bunkers were hesitant to leave them, even after an "all clear" message went out. Some were crying, Johnson said. Some were whimpering. Others were vomiting.

Johnson, a flight surgeon, asked if anyone needed medical attention. No one said yes, prompting the initial report to the Pentagon of zero injuries that later was announced by Trump.

"The fact was, everyone had these symptoms of traumatic brain injury," Johnson said. "But those symptoms were insignificant compared to what we went through all night."

Service members began receiving testing afterward. Patients with the most significant symptoms were evacuated from Iraq. Johnson was diagnosed with a brain injury and spent weeks receiving physical therapy, speech therapy, occupational therapy, ocular motor therapy and psychiatric care in Germany. He eventually returned to the Middle East to complete his deployment.

Davenport and Moody said they did not suffer any injuries. But they wonder how America moved on so quickly.

"It's kind of disheartening sometimes," Davenport said. "Some people don't even know it happened."

The Washington Post's Alice Crites and Julie Tate contributed to this report.