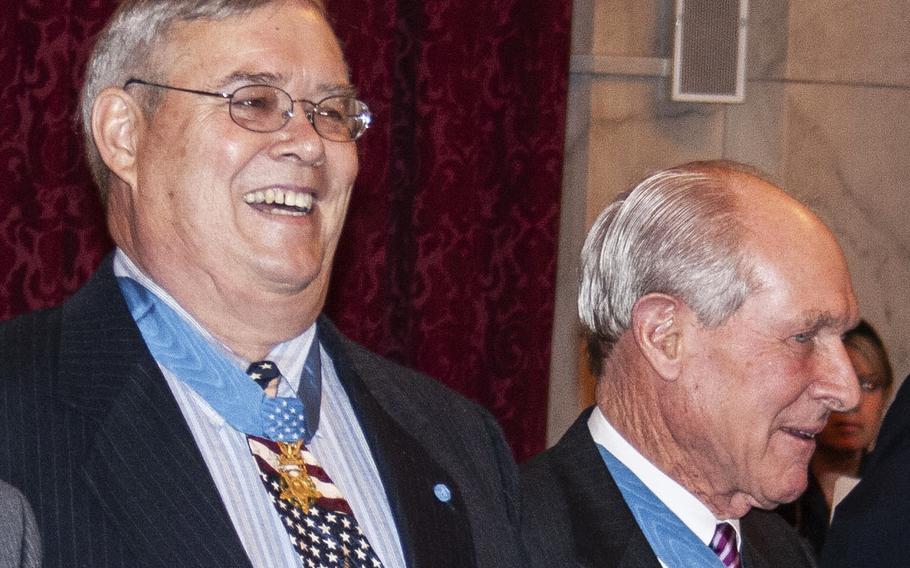 An Army medic who received the Medal of Honor for picking up a fallen soldier’s rifle and using it to protect his wounded comrades during the Vietnam War has died, according to the Congressional Medal of Honor Society.

Charles Hagemeister, 74, died Wednesday in Leavenworth, Kansas, the society announced that day. It did not state a cause of death.

The youngest of four siblings, Hagemeister was born in Lincoln, Neb., on Aug. 21, 1946. He graduated from Lincoln's Southeast High School and was drafted into the Army in May 1966 while on a break from the University of Nebraska, according to the society’s statement. Hagemeister's platoon came under heavy fire from three sides by an enemy force occupying well-concealed, fortified positions and supported by machine guns and mortars, according to his medal citation.

Seeing two of his comrades seriously wounded, Hagemeister raced through the deadly hail of fire to help. After learning that the platoon leader and several other soldiers had been wounded, he crawled forward under fire to render aid, the citation states.

At one point in the battle Hagemeister seized a rifle from a fallen comrade, killed a sniper and three other enemy soldiers who were attempting to encircle his position, and silenced an enemy machine gun before securing help from a nearby platoon to evacuate the wounded, according to the citation.

“Hagemeister's repeated heroic and selfless actions at the risk of his life saved the lives of many of his comrades and inspired their actions in repelling the enemy assault,” the citation states.

Stars and Stripes ran a front-page photograph on May 16, 1968, of Hagemeister and three others receiving the nation’s highest awards for valor two days earlier from President Lyndon Johnson in the Hall of Heroes at the Pentagon.

“As we meet here other men in Paris are beginning the very hard negotiations that we hope will one day silence the guns in a free Vietnam,” Johnson said at the ceremony.

In a July 1968 interview with Army Digest cited by the Medal of Honor Society, Hagemeister said: "The pressure of a crisis situation makes you realize what you're made of. If you do your job and a little bit for somebody else, you'll usually come through.”

Hagemeister retired from active duty as a lieutenant colonel in June 1990 and served on the board of the Congressional Medal of Honor Society. He is survived by his wife, Barbara, two children and two grandchildren.