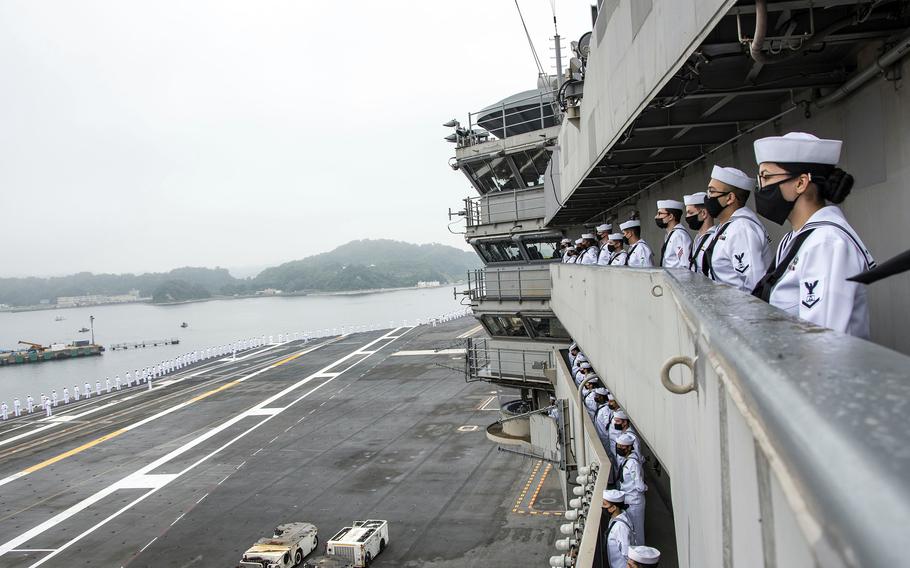 Sailors man the rails aboard the aircraft carrier USS Ronald Reagan as it departs Yokosuka Naval Base, Japan, Wednesday, May 19, 2021. (Quinton Lee/U.S. Navy) Sailors prepare to man the rails aboard the aircraft carrier USS Ronald Reagan as it departs Yokosuka Naval Base, Japan, Wednesday, May 19, 2021. (Quinton Lee/U.S. Navy)

Sailors in summer white uniforms manned the rails of the USS Ronald Reagan on Wednesday as the aircraft carrier pulled away from the pier for its first patrol of the year and its second during the coronavirus pandemic.

The carrier’s air wing — based at Marine Corps Air Station Iwakuni in southwestern Japan — is expected to join the ship at sea. The Ronald Reagan typically deploys with a strike group of destroyers, cruisers and an unannounced submarine presence.

The carrier completed sea trials in preparation from the deployment last week, according to a Wednesday statement announcing the patrol.

"Ronald Reagan's flexible presence is a key element in helping assure our regional allies and partners that the United States remains committed to ensuring freedom of the seas," the carrier’s commander, Capt. Fred Goldhammer, said in the statement.

Navy officials declined to say whether the strike group would make port calls or if the crew will get liberty during the patrol.

Last year, the service kept many of its warships at sea for extended periods and sidestepped most port calls because of the coronavirus. The guided-missile destroyer USS Stout broke a service record of 208 consecutive days at sea due to coronavirus mitigation and operational requirements.

“There aren’t any Navy-wide decisions on vaccinations and liberty, but there is one requiring [restriction of movement] for those who aren’t vaccinated,” the service’s chief of information, Vice Adm. Charles Brown, told Stars and Stripes on May 14.

During its six-month patrol last year, the Ronald Reagan made only one port call, at Guam.

“Sailors had access to specific designated areas on the pier and a secured beach on base,” carrier spokeswoman Lt. Cmdr. Dawn Stankus told Stars and Stripes in an email May 12.

She declined to say whether the Ronald Reagan or the ships in its strike group would make more stops this time or what the liberty policy will be for vaccinated and non-vaccinated crew members while in port.

All sailors are encouraged to receive a vaccine, but at this point it is voluntary, 7th Fleet spokesman Lt. Cmdr. Joe Keiley said in an email before the warship left Yokosuka.

“While we cannot discuss the specific numbers of crew vaccinations, the Ronald Reagan crew collectively maintains a mission-ready mindset and understands the importance of the health protection measures in place,” he said.

If there is an opportunity to vaccinate sailors at sea, the option will be offered, he said.

Port calls may be possible during the strike group’s patrol, Keiley added, but liberty may hinge on whether an individual is vaccinated.

“In accordance with current policy, the health conditions of the port area will be taken into consideration to determine the health protection strategy for those who are not immunized,” he said.