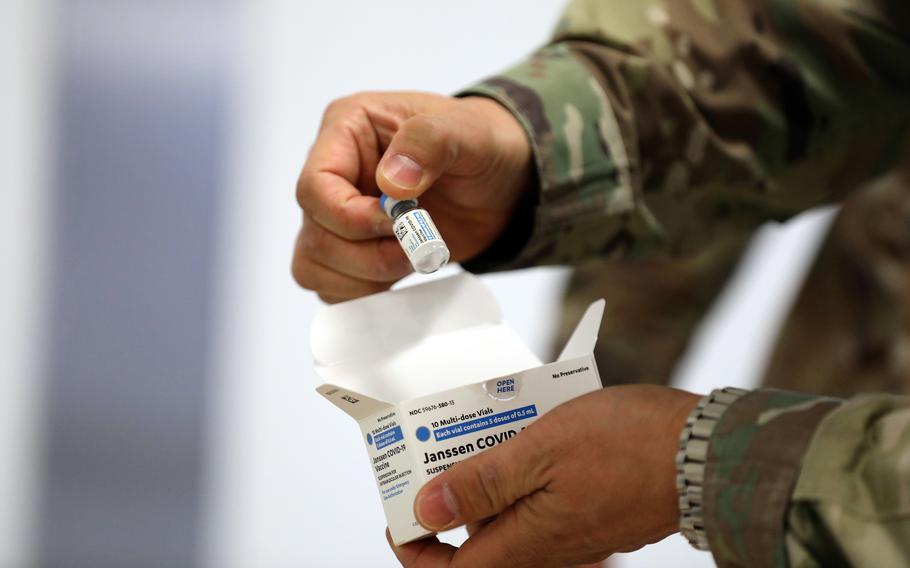 U.S. Forces Korea offered the one-shot vaccine a few days ago, according to a South Korean defense official who did not wish to be identified due to ongoing discussions.

USFK spokeswoman Jaqueline Leeker declined to comment on the statement but said the command “continues to work closely” with the Korea Disease Control and Prevention Agency and the Ministry of National Defense regarding use of vaccines authorized by the U.S. Food and Drug Administration.

Word of the offer comes as South Korea deals with a short supply of COVID-19 vaccines produced by AstraZeneca and Pfizer.

The Defense Department on Friday relaxed its regulation on wearing masks and social distancing in light of the CDC’s loosened restrictions.

Fully vaccinated people are not required to wear masks on U.S. military installations in South Korea, with some exceptions, such as health facilities and Defense Department schools. An individual is fully vaccinated two weeks after a single-shot vaccine or the second of a two-shot vaccine. DOD added that “personnel should continue to comply with CDC guidance regarding areas where masks should be worn, including in airports.”

USFK vaccinated personnel are “encouraged” to carry proof of their vaccination, such as a vaccination card, according to a press release Friday.

Johnson & Johnson’s Janssen vaccine is administered in one dose and was 66.3% effective in clinical trials.

Distribution of the vaccine was temporarily paused April 13 after six women, out of 6.8 million doses administered, developed a rare blood clot. The pause was lifted 10 days later, after the CDC determined the Johnson & Johnson vaccine’s “potential benefits outweigh its known and potential risks.”