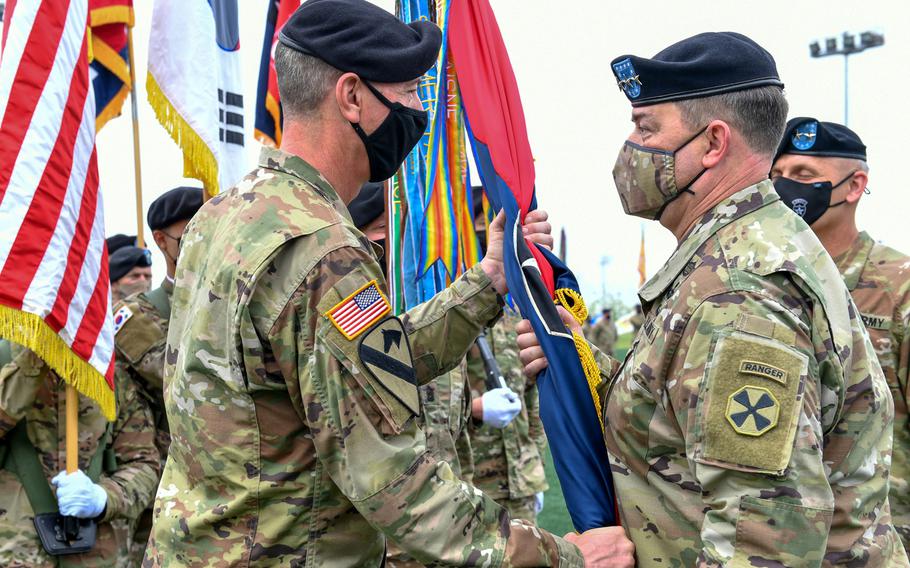 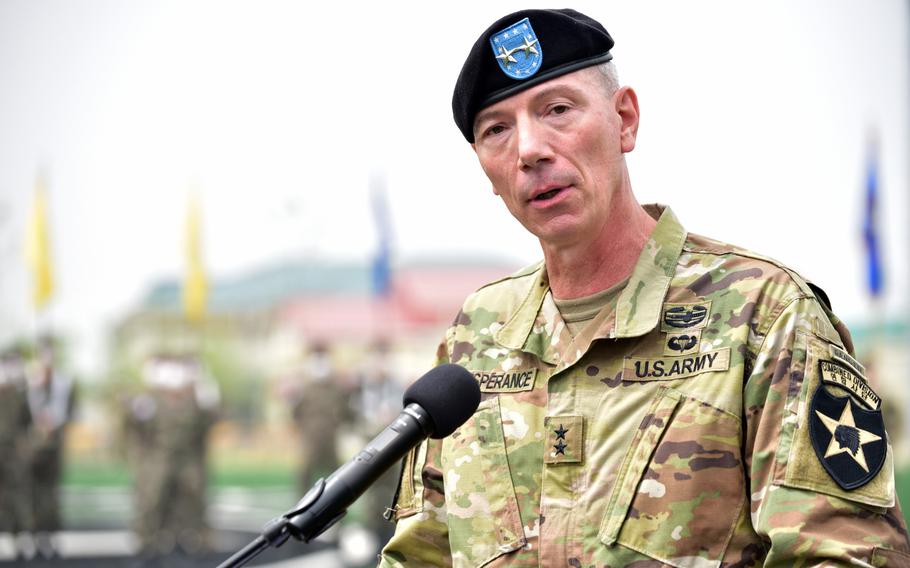 CAMP HUMPHREYS, South Korea — Maj. Gen. David Lesperance, a veteran of both wars in Iraq and formerly the head of the Army’s combat training center in California, assumed command of the 2nd Infantry Division on Tuesday.

Lesperance took charge of the Army’s only permanently deployed division from Maj. Gen. Steve Gilland at a ceremony outside the division headquarters at Camp Humphreys. It’s also the only combined division in the U.S. Army, with South Korean army officers serving in some key roles.

Most recently Lesperance was commander of the National Training Center at Fort Irwin, Calif., a huge, remote expanse of desert where the Army puts units through training in everything from counterinsurgency to armored warfare.

Lesperance “knows and understands what it takes to train our units and build readiness,” the Eighth Army commander, Lt. Gen. Willard Burleson, said after the passing of the division colors. “I can think of no finer officer to take command over this division.”

Accompanied at the changeover by his wife, Kelly, Lesperance said he is honored to begin his first tour of duty in South Korea.

“It really is an honor to stand here today, successor to a great lineage of 2nd Infantry Warrior Division commanders who set an incredible example of combat readiness, combined partnership and enabling and sustaining the alliance” with South Korea, he said.

Gilland is headed to Fort Hood, Texas, to become III Corps deputy commanding general. He took command of the “fight tonight” division in July 2019, eight months ahead of the coronavirus outbreak on the Korean Peninsula.

“Steve has been without a doubt the right leader at the right time to ensure this division is ready to fight tonight, living up to the unit's motto "second to none," Burleson said during the ceremony.

Gilland was responsible for handling the 2nd ID response to the pandemic, ensuring a quarantine process, processing thousands of troops and their families safely and ensuring compliance with U.S. military and South Korean measures aimed at curbing the virus’ spread, according to a 2nd ID statement Tuesday.

Lesperance was commissioned an armor officer after graduating from Portland State University in 1989. He served in Operation Desert Storm, Operation Iraqi Freedom and NATO’s Operation Joint Forge, a force to provide military stabilization in Bosnia-Herzegovina.

Approximately 28,500 U.S. service members are stationed in South Korea, which remains technically at war with the North since the 1950-53 Korean War ended in an armistice instead of a peace treaty.