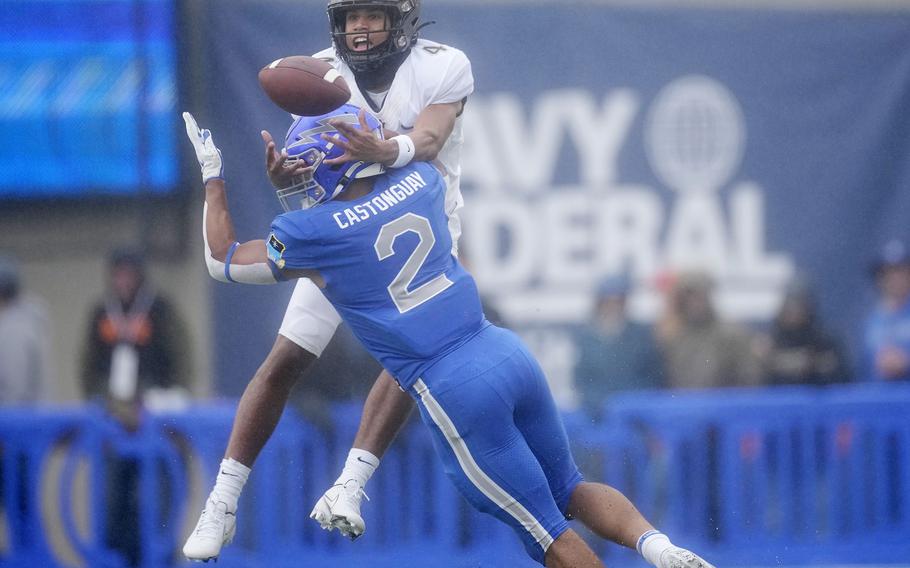 AIR FORCE ACADEMY, Colo. — Fullback Brad Roberts ran for 174 yards and three touchdowns to help Air Force overcome several miscues, including a snap over the punter's head, in a 41-10 win over Colorado on a dreary Saturday.

Hosting the Buffaloes for the first time since 1974, the Falcons built a 20-0 lead. Air Force entered the nationally televised game as a 17 1/2-point favorite, according to FanDuel Sportsbook, but couldn't shake Colorado until late in the third quarter, when they scored 21 straight points.

"It's an awesome feeling (to beat Colorado)," said Roberts, who is from a Denver suburb and went to a few Buffaloes games growing up. "We played a really good game and our defense really stepped up to the plate."

Air Force (2-0) and Colorado (0-2) combined for six turnovers in the rainy conditions, including each team fumbling at the goal line while going in for a score.

The Buffaloes' goal-line fumble occurred in the third and right after Air Force set them up in good field position after a snap sailed well over the head of punter Carson Bay. Alex Fontenot was trying to wiggle into the end zone when the ball was ripped away. It would have made it a one-score game.

Falcons quarterback Haaziq Daniels scored from a yard out late in the third to wrap up a second straight win over the Buffaloes. Air Force won in Boulder in 2019.

"Just being able to come out here and dominate, can't put it into words," said Daniels, who completed one pass for 8 yards and rushed for 29 yards. "It's a good feeling."

Colorado is off to an 0-2 start for the first time since 2012. The Buffaloes tried to shake things up by going with quarterback J.T. Shrout over Brendon Lewis. Shrout finished 5 of 21 for 51 yards and one interception. He also slid too early on a fourth-and-short play in the fourth quarter when he could have had the first down.

"Today was a disappointing performance," Colorado coach Karl Dorrell said. "We didn't play well. We didn't play to our capabilities. ... We've got to continue this work and develop this football team. It's unfortunate, though, that we had a performance like that."

The Falcons finished with 435 yards rushing after gaining 582 a week ago against Northern Iowa. Leading the way was Roberts, who relishes his role as a fullback.

"I'm trying to make (fullback) hip again," Roberts cracked. "I love being a fullback, especially the way we run our fullbacks in this offense. It's awesome."

It wasn't the start the Buffaloes envisioned when Shrout bobbled the ball on the second play of the game. Air Force defensive end Christopher Herrera recovered the fumble, setting up Roberts' 14-yard score a play later to make it 7-0 just 33 seconds into the contest.

"Are the right people here to get that fix? Yes. Absolutely," Dorrell said. "The bottom line — we're not playing well. We've had good practices, but that hasn't translated to what it should look like on Saturdays."

Air Force should creep closer to being ranked after receiving votes last week.

The Falcons are 30-4 in nonconference home games under coach Troy Calhoun. "That was a little bit of a crazy game, with the number of turnovers," Calhoun said. "I thought our defense really made some gigantic, sudden-change stops that were invaluable."

Roberts said the fullbacks were invited to dine with Calhoun, whose menu included hamburgers along with macaroni and cheese.

"Maybe that helped with the game we had today," Roberts said.